Pollution and toxic substances kill more than 9 million people every year, nowhere is safe. But the highest burden is suffered by communities located near the most polluting and most dangerous facilities; facilities such as open-cut mines, smelters, oil and gas fields, petroleum refineries, chemical and steel plants, garbage dumps, hazardous waste incinerators and coal-fired power stations. ‘Sacrifice zone’ was coined to describe areas made uninhabitable by nuclear weapons tests. The term is now being used to refer to communities located near highly polluted, highly dangerous sites; communities that are often already marginalised and vulnerable because of race, poverty and other socioeconomic factors.

The people who live in sacrifice zones suffer terrible physical and mental health problems (particularly cancer and heart and respiratory diseases) and multiple human rights abuses. They are exploited, traumatised and stigmatised. Just like the environment, they are sacrificed. All while company executives and shareholders reap the profits and consumers enjoy cheap goods.

There are thousands of sacrifice zones around the world and a special UN report has highlighted 55. To illustrate:

The atmospheric ozone layer protects life on Earth from the sun’s ultraviolet radiation. In fact, it was only after the oxygen level in the atmosphere increased sufficiently for a thin layer of ozone to form around 600 million years ago that living organisms were able to move in any serious way from the oceans onto the land. It’s been known since the 1970s that numerous industrial processes release chemicals (particularly hydrofluorocarbons) that deplete the ozone layer but it was the discovery of a ‘hole’ in the ozone layer over the Antarctic in 1985 that provided the stimulus for nations to develop the Montreal Protocol in 1987. This has been remarkably successful in limiting the use of ozone depleting chemicals and beginning the repair of the ozone layer.

It’s very concerning, however, that the smoke released by bushfires, which are on the increase as a result of global warming, contains a particularly toxic mix of chemicals that further damages the ozone layer and delays its recovery. It’s particularly worrying for Australians that a new study utilising three different datasets has demonstrated that the 2019/20 Black summer bushfires reduced the ozone layer over Australia by about 1 per cent in March 2020. That may not sound like much but 1 per cent is the amount that the ozone layer has been increasing every decade since the introduction of the Montreal Protocol. A 1 per cent increase in ultraviolet radiation is associated with a 2 per cent increase in skin cancer.

I’m sure that many city-dwelling dogs and their owners enjoy a walk in urban and peri-urban bushland areas rather than always being confined to the local streets and parks. It would be a rare dog indeed that didn’t attend to its natural functions while enjoying the great outdoors and I wonder how many dog owners collect their dog’s faeces when in bushland (casual observation of the streets and parks where I walk daily tells me that there is much defaulting even in these spaces – but that’s another matter). Diligent researchers have conducted 487 observations over 18 months to collect ‘dog abundance’ data per hectare per year in four peri-urban forests in Belgium. They have combined this information with the nutrient concentrations of dogs’ urine and faeces to calculate that 11 kg of nitrogen (N) and 5 kg of phosphorous (P) are deposited per hectare per year. Urine and faeces make roughly equal contributions to the N but the P is almost wholly faeces (if you see what I mean). These amounts are substantial when compared with the amounts of N and P involved in natural cycles and traditional nature management processes, although dogs’ contributions are, of course, not evenly distributed. Yes, it’s true that in any particular patch of bush most urine and faeces is deposited by the native animals rather than by pet dogs but the wild beasts are an intrinsic part of a balanced ecosystem, the dogs are being fed outside the ecosystem and are introducing additional N and P into the area’s metabolism.

You may be thinking that I have highlighted this somewhat quirky study as a “Really, have researchers got nothing better to do” rant. Far from it. These levels of ‘fertilisation’ by dogs can have very negative effects on biodiversity and ecosystem functioning. Higher nutrient levels can lead to increased plant growth of nutrient-demanding species which outcompete others and cause loss of species. This is not what is wanted in urban and peri-urban bushland where species diversity is valued and nurtured, and it’s a particular problem for many parts of Australia where the native flora has evolved and thrive on nutrient-poor soils.

I’m retiring to my bunker now until the dog owners among you cool down.

I’m no engineer so I’m pretty clueless about solving mechanical and building problems. My cluelessness extends to the strategy not just the technical details. What, for instance, is the best approach to constructing an environmentally sensitive, low energy, comfortable home in Australia? Create an airtight, insulated home that retains the warmth or cooling generated from within, or build a passive solar home that is open to breezes that minimise daytime heat gain and maximise night-time heat loss? The sealed box or PassivHaus approach minimises draughts in and air leaks out by making the building airtight, focusing on thermal insulation, particularly around windows and doors, and providing fresh air through mechanical heat recovery ventilation. On the other hand, ‘free-running’ houses are open to cooling breezes by careful positioning of windows to allow cross-ventilation, and have shaded windows, walls and roofs protected from direct sun, light coloured roofs to reflect heat and shaded outdoor living areas. The free-running design is perhaps best suited to Australia’s warmer regions.

Fantastic picture from the Woollahra Council Sustainability Team newsletter. Apparently channel-billed cuckoos love laying their eggs in the nests of currawongs, magpies and ravens. In Tasmania at Christmas I watched a family of superb fairy-wrens very busily and conscientiously feeding a Horsfield’s bronze-cuckoo. I don’t suppose smaller birds like wrens could keep up with the demands of a growing young channel-billed, so no point laying your egg in their nest – it might not even fit in. 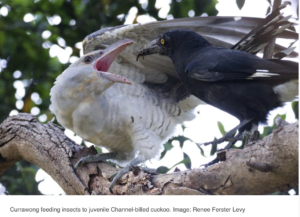