Seagrasses are the forgotten but valuable cousins of our coasts. Powerful ‘farmers’ pay lots and lobby hard to avoid regulation, but methane emissions can be reduced.

Seagrasses lose out in the coastal ecosystem popularity stakes to coral reefs, wetlands and mangrove forests. Perhaps they need a new PR agent or an influencer to extol their virtues, even tell us all what they really are. The world’s 72 species aren’t grasses at all. They evolved on land and are the only underwater flowering plants – more like lilies and orchids than grasses except that they are pollinated by crabs and shrimps not insects. Seagrass meadows are found in shallow brackish waters all over the world but their full extent is uncertain, at least 160,000 square kilometres and possibly as much as 600,000 (three-quarters of NSW). 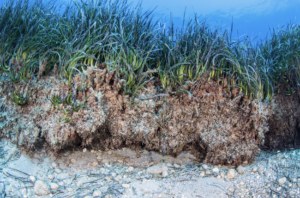 That’s all fascinating, of course, but it’s the benefits that seagrasses provide to the environment in general and humans in particular that are particularly important. For instance, seagrass meadows provide food and protection to young fish, seahorses, dugongs and turtles and the loss of seagrasses is linked to declines in fish stocks and food insecurity for coastal communities. They also clean water of excess nutrients, sediment and bacteria and reduce the force of waves, protecting coastlines from storm damage and erosion. Seagrass also helps fight climate change. About 20 billion tonnes of carbon is stored in the world’s seagrass meadows but as they are lost and degraded the ability of seagrass to absorb carbon is lost and the stored carbon is released.

Unfortunately, seagrasses chose to live in places that have subsequently become popular for human habitation and recreation and industrial development. Consequently, the area covered by seagrasses is currently declining at about 7 per cent per year. Rising sea levels and warmer waters don’t help either. By 2050, we’ll be closer to net zero for seagrasses than CO2 unless something changes. And things are changing in some places. Florida has declared March ‘Seagrass Awareness Month’ and scientists have launched social media campaigns (I told you they needed an influencer). Other areas have reduced the nutrient load from agricultural run-off, improved water quality, limited destructive fishing and recreational practices, and erected signage in seagrass-dense areas. Sixteen countries have even referred to seagrass in their national plans to fight climate change (NDCs) that they have submitted to the UN.

Meet the People Getting Paid to Kill Our Planet is a 14 minute video about the environmental pollution caused by farming, or rather by BigAg and BigFarm – the massive multinational companies producing, processing and retailing our food. Much of the focus is on farming’s contribution to global warming, principally via ploughing and tilling which releases CO2 from the soil, the nitrous oxide released from fertilisers, and cattle’s production of methane. If all the cattle in the world were a country, it would be the world’s second biggest greenhouse gas polluter, after China. But mention is also made of agriculture’s high demand for water and the pollution of drinking water by animal faeces.

The main point of the video, though, is the power of the industrial farming sector to present to the public a totally false, bucolic image of 21st century farming and prevent any laws that would regulate them or limit their ability to pollute the air, land and water. BigAg is also now presenting itself publicly and politically as an essential part of the solution to climate change – which it most certainly should be but their efforts so far are mostly greenwashing. 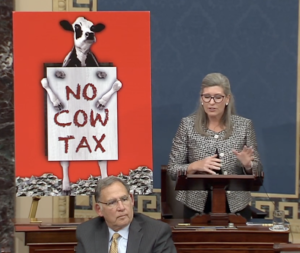 It costs a lot of money to hire the best lobbyists, lawyers and PR companies and you need lots of friends in high places to block legislation but BigAg has both and faces little opposition. Environmental groups spend just 1-2 per cent of their budgets on the environmental problems caused by farming.

The video focuses on farming in the USA but its messages are totally relevant to Australia. A few years ago, I was one of four public health people who managed to organise a couple of hours of meetings with politicians in Canberra to talk about climate change and health. We were pretty pleased with ourselves until we found in the Parliament House restaurant a program accidentally left behind by a group of agricultural lobbyists who were also visiting politicians that day. They didn’t have just two or three meetings; they had a full day of meetings with ministers, shadow ministers and others of influence. No prizes for guessing who left the biggest impression in the corridors of power that day.

Talking of methane, emissions of which are increasing, a 45 per cent cut in methane emissions could reduce global warming by 0.3 degrees Celsius by 2030. This would greatly assist efforts to keep warming under 1.5 degrees and avoid an allegedly temporary but still very dangerous overshoot. In Glasgow last November, over 100 countries signed the Global Methane Pledge to reduce worldwide methane emissions by 2030 by 30 per cent – not the 45 per cent needed but a start.

As we all know, though, pledges are easy; acting and delivering is what matters. A new report highlights plenty of cheap and effective steps governments can take to cut methane emissions and not just meet but exceed their pledge. For instance:

Reducing methane emissions in these three areas need not be a burden. It can produce profits, jobs and better public health. A 45 per cent cut in total methane emissions could also reduce the premature deaths associated with air pollution by 250,000 per year.

Brazil continues to destroy the Amazon

Deforestation of the Amazon forest, particularly in Brazil, is well known. The graph below shows the underlying reasons for the deforestation between 2001 and 2015. By far the major destructive force was the creation of agricultural land for cattle grazing, with soyabean production a distant but still significant second. A million hectares is about the size of four ACTs. 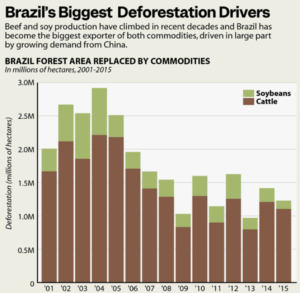 After 2004 Brazil successfully reduced deforestation for the next decade but the next graph shows that things turned around dramatically in 2016 and 2017. Following another brief respite, deforestation started increasing again after Bolsonaro became president in January 2019. The black line in the graph represents the three year moving average. 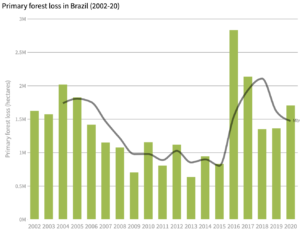 Over half of the world’s species of seagrass can be found around Australia’s coastline. Just like elsewhere they provide us with essential benefits and are threatened by human activities. 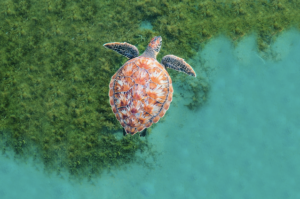 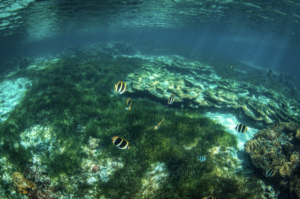