Heat causes climate change and climate change causes humans to produce reports: reports documenting the worsening problem and its causes; reports about the actions needed but not being taken; and reports about actions that should be avoided but are taken any way. And through it all, we keep burning coal.

You can always count on the Breakthrough Group to provide an evidence-driven, honest, easy-to-read analysis of the pickle we’re in with climate change. And its ‘Climate Reality Check 2020 is no exception. The Reality Check’s ‘20 critical understandings, observations and insights’ include:

The World Meteorological Association has produced a very snappy, less than tw0-minute video of current climate conditions and their effects.

CONSTRAIN is a consortium of 14 European partners that brings together world-leading climate scientists to develop a better understanding of climate projections over the next 20-50 years. Their most recent report ‘zeroes in’ on a new generation of climate models with some interesting conclusions:

There is a short FAQ version of the CONSTRAIN report for the time-challenged.

The nations of the G20 are responsible for more than 90% of cumulative CO2 emissions and about 80% of current emissions. The goal of Climate Transparency, a consortium of research organisations and NGOs, is to ‘encourage ambitious climate action in the G20 countries’ by providing information and stimulating debate. Its most recent ‘transparency report’ compares climate action and responses to Covid-19 across the G20. It doesn’t provide much encouragement.

Despite the need for urgent action to reduce greenhouse gas emissions dramatically, fossil fuels still provided 82% of the G20’s primary energy in 2019, many G20 nations are lacking effective targets and policies for emissions reductions, and the majority are spending most of their Covid recovery stimulus on emissions-intensive and environmentally damaging industries.

In summary, ‘the G20’s climate ambition and action is behind what would be needed to achieve the Paris Agreement goals’ – these are the richest, best-educated, most technologically advanced nations in the world, remember. As well as the overview report, in which Australia mostly features as a poor performer, there is a special report for each country. I cannot begin to tell you how depressing it is to read of Australia’s complete abrogation of responsibility.

Recommended policies for the G20 include to:

Benefits would be widespread:

The World Resources Institute recently produced a State of Climate Action report that provides an overview of how we are collectively doing in tackling the climate crisis across several dimensions.

The report rates global and country-level progress towards emissions reduction targets for 2030 and 2050 that would limit global warming to 1.5oC.

The assessment includes 21 indicators covering six sectors: agriculture, buildings, forests, industry, power and transport. There are two indicators in which the direction and pace of change are sufficient to meet the goal (ruminant meat consumption, but this is complicated by gross regional differences, and increasing crop yields); 13 indicators in which change is in the right direction but far too slow; and two are heading in the wrong direction (increasing deforestation and increasing agricultural emissions).

There was insufficient data to assess the progress of four indicators. The Institute’s graphic below provides estimates of how much faster change must occur in six crucial indicators for the world to stay below 1.5oC of warming. 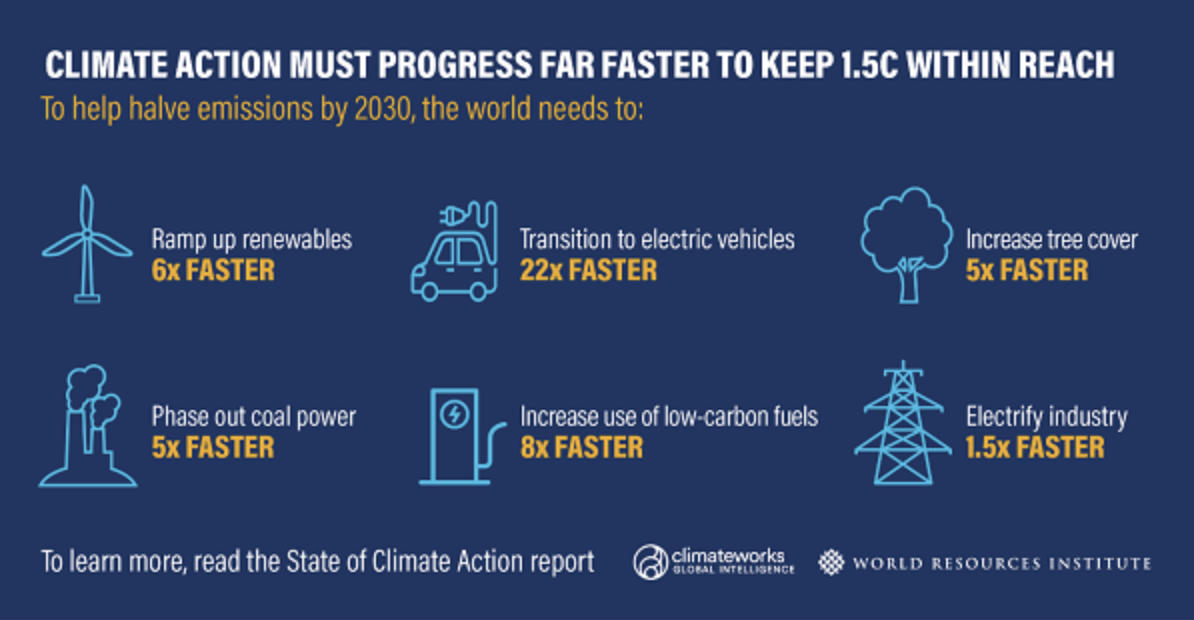 At 7:30 am on his first full day as President Biden’s Special Presidential Climate Envoy, John Kerry used the figures in the graphic above while addressing the B20 – the business arm of the G20.  Kerry presented a reasonably frank assessment of the climate crisis the world finds itself in has recklessly created for itself and an upbeat view of the prospects for effective action. Kerry’s opening comments are interesting:

We began down [the] road back to progress yesterday when President Biden re-joined the Paris Climate Accord, commissioned a team of climate leaders throughout his government with expertise and vision, and with a few strokes of his pen began to restore domestic environmental leadership.

But going forward, I believe it is important for the United States, and for countries and companies all over the world, to travel down that road with humility, and ambition.

Humility because we know that the federal government of the United States, until yesterday, walked away from the table for four wasted years when we could’ve been helping to meet the challenge.

Humility also in knowing that for all our industrial capacity, the United States is responsible for only 15% of global emissions. The whole world must come to this table to solve this problem.

And humility in knowing that today no country and no continent is getting the job done.

At the COP in November, all nations must raise ambition together – or we will all fail, together. Failure is not an option.

What do you do if?

Of course, get your free market mates in the private sector-loving government to adopt the idea of a gas-led recovery and pour $50 million into a ‘sinkhole […]  a waste of taxpayer money that will bring zero return’.

That nicely sums up the federal government’s gift to the gas industry to develop the gas reserves in the Beetaloo Basin in the Northern Territory.

Global coal consumption may have peaked in 2013 but it has been in the 7,000-8,000 Mt per year range every year since 2009, and it’s expected to stay around that level until at least 2025 (see graph above). Today China consumes about half of the coal produced and when you add in other Asian nations this jumps to about 77%.

Coal is a dying industry. But individuals, companies and nations that benefit from coal will keep mining, selling and burning it for as long as possible before it’s finally buried. I noted last week that the laws of physics don’t negotiate. Nor do they give credit for worthy actions … they care not one jot for how much renewable energy the world installs and uses. As far as global warming is concerned, the laws of physics pay attention only to the concentration of greenhouse gases in the atmosphere.

And while we continue to emit greenhouse gases at current levels, the concentration will keep going up and the world will keep warming. The longer that happens, the more likely it becomes that humanity will lose any ability to prevent an environmental and human catastrophe. The graph above, and similar ones for oil and gas, are the only ones that really matter.

That all said, it’s difficult not to be just a little impressed by the picture below. 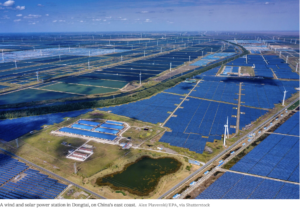