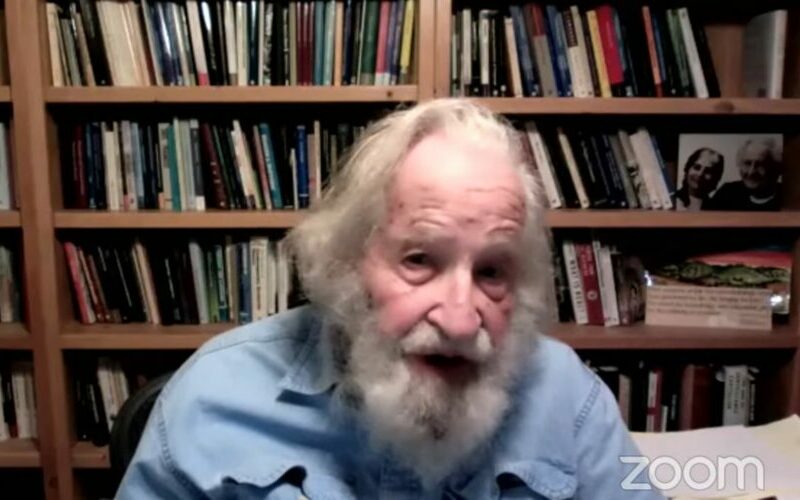 As Pearls and Irritations continues to grow, our articles are being noticed far and wide, including by linguist Noam Chomsky in a recent lecture.

In delivering a lecture to McMaster University last week, linguist and public intellectual Noam Chomsky spoke about the United States perceiving China as a threat to its own security.

In the formal online lecture, called “Rethinking the civic imagination and manufactured ignorance in the post-pandemic world”, Chomsky spoke about the growing threat of nuclear war, and the “perceived” threat of China to the US.

He discussed the submarines agreement between the US and Australia, and to support his statement that China’s nuclear weapons were inferior to those of the United States, he quoted heavily from Brian Toohey’s September 29 Pearls and Irritations article. In that piece, Toohey set out just how superior the US’s capabilities were, writing:

Take the example of nuclear-powered, ballistic missile-armed submarines (SSBNs). China has four Jin-class SSBNs. Each can carry 12 missiles, each with a single warhead. The subs are easy to detect because they’re noisy. According to the US Office of Naval Intelligence, each is noisier than a Soviet submarine first launched in 1976. Russian and US subs are now much quieter.

China is expected to acquire another four SSBNs that are a little quieter by 2030. However, the missiles on the subs won’t have the range to reach the continental US from near their base on Hainan island in the South China Sea. To target the continental US, they would have to reach suitable locations in the Pacific Ocean. However, they are effectively bottled up inside the South China Sea. To escape, they have to pass through a series of chokepoints where they would be easily sunk by US hunter killer nuclear submarines of the type the Morrison government wants to buy.

In contrast, the US has 14 Ohio-class SSBNs. Each can launch 24 Trident missiles, each containing eight independently targetable warheads able to reach anywhere on the globe. This means a single US submarine can destroy 192 cities, or other targets, compared to 12 for the Chinese submarine. The Ohio class is now being replaced by the bigger Columbia class.

Chomsky argued that the submarines deal between the US and Australia did serve a purpose: “To establish more firmly that the United States intends to rule the world even if that requires escalating the threat of war, possibly terminal nuclear war in a highly volatile region.”

In discussing the idea that China is the greatest perceived threat to the US, Chomsky quoted an article by Paul Keating, also published in Pearls and Irritations late last month (and republished from the Australian Financial Review), in which the former prime minister said:

Chomsky argued that in order for the world to address the global issues of our time — such as climate change and the pandemic — the United States would need to work with China.

“The US and China will need to cooperate in addressing these crises or we are doomed, it’s as simple as that,” he said. “The question we face now is whether we have the will to save ourselves from cataclysm or whether we will choose to show that higher intelligence really may be a lethal mutation providing an unhappy answer to Fermi’s paradox.”

Watch the full lecture below, and Chomsky’s comments on Keating and Toohey’s work from about 35 minutes in.