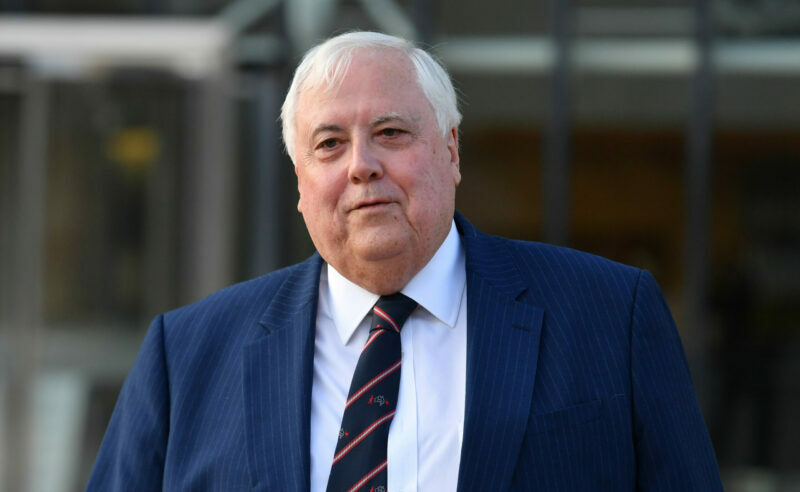 Clive Palmer has already lost one High Court case challenging the WA border closure. He is threatening another. That too will fail.

The newly constituted High Court will not invoke section 92 to strike down Premier Mark McGowan’s border closure. The pressure will come from Josh Frydenberg turning off the tap, and WA voters pressing for an opening up. Until that happens, the border will remain closed.

Clive Palmer is one Australian wanting to smash border restrictions during this time of pandemic. He is threatening to go back to the High Court seeking recognition of his right as an Australian citizen to travel freely between the states.  In particular he claims the right to enter Western Australia where he has significant mining interests. One of his companies has offices and staff in both Brisbane and Perth, deriving the majority of its income from Western Australia, also being involved in high value litigation and arbitration in Perth.

He was unsuccessful in his first bid in 2020 when he argued in the High Court that the Western Australian legislation authorising border closures by state officials was contrary to section 92 of the Australian Constitution which provides that “trade, commerce and intercourse among the states … shall be absolutely free”.  Rejecting Palmer’s bid, Justice Gageler observed, “The ‘riddle of s 92′ lies in the question begged by the constitutional text: absolutely free from what?” The pre-eminent legal historian Professor John La Nauze once observed that the Founding Fathers at the constitutional conventions at the end of the nineteenth century ultimately agreed to section 92 without discussion and “’absolutely free’ was, to coin a phrase, absolutely free of legal criticism in open Convention.”

There has been a lot of complex judicial writing about how to apply section 92. Three of the present High Court judges think there is a need for an analysis called “structured proportionality”. Two other judges think there is a need only to ask whether the law which limits open border access has a non-discriminatory purpose, imposing no limits greater than are “reasonably necessary to achieve a legitimate object”. There are now two new untested judges on section 92. Last time, all five justices were agreed that Palmer did not get to first base. Whatever test is adopted by the two new judges and whatever test is to be applied by the majority of judges in his next challenge, Palmer is still unlikely to get any satisfaction from the High Court.

Under the national plan, there is supposed to be a loosening of restrictions at the very latest once 80 per cent of the eligible population are vaccinated. There are indications that states like Western Australia and Queensland might still close their borders. That’s when there will be further debate about free trade and intercourse among the states. But neither Palmer nor any other disaffected citizen is likely to cause much grief to state governments in the High Court. These will be matters for political agitation between the Commonwealth and state governments, not for constitutional determination by the High Court.

Once we reach 80 per cent, the Commonwealth is likely to reduce financial assistance to those being impacted by the effects of lockdowns including border closures. This will create a fiscal incentive for the opening of borders. Also there is growing pressure on all governments to factor in the full human costs of lockdowns and border closures, including the collapse of small business, the educational and social deprivation of children unable to attend school, the long term separation of families, the loss of employment, the impact on mental health, and the unavailability of routine health care for conditions other than Covid.

Those who find the language or rhetoric of “rights” useful need to consider not just the rights of the vulnerable to be protected from the virus because of their advanced age or co-morbidities, but also the rights of others to live a productive life, achieving their full human flourishing in community. There are always limits on rights. There is always a need to balance conflicting rights. There is also a need to set limits on rights so as to serve the common good or the public interest.

We Australians are not used to the complex public discussion about the limits on rights because, unlike most equivalent countries, we do not have a national bill of rights in legislative or constitutional form. What we do have is a whole panoply of anti-discrimination laws which provide that you cannot discriminate against persons with a particular attribute (race, gender, age, disability). You have to treat those persons as well as you would treat others. Our High Court is fond of saying that the essential notion of unacceptable discrimination is “the unequal treatment of equals, and, conversely, in the equal treatment of unequals”. But it’s a much more complex discussion deciding what limits to set on everyone for the sake of everyone.

Our High Court has not only developed a complex jurisprudence of freedom of trade, commerce, and intercourse. It has also found in our Constitution an implied freedom of political communication which intersects with other rights and freedoms such as the right to reputation. In both fields, the court has authorised limits on freedom or rights which are reasonably necessary to achieve a legitimate objective.

For example, in 1988 the court was asked to determine whether a Tasmanian law restricting the importation of under-sized crayfish was a valid law given that it placed a limitation on interstate importation of the under-sized crayfish, even though crayfish of that size could lawfully be sold back in their home state South Australia. Tasmania successfully argued that their state officials could only conduct sporadic investigations of crayfish stock in Tasmanian waters and stores, ensuring compliance with the size requirements. There was no way that the officials would be able to distinguish young crayfish imported from interstate which were mixed with crayfish born and bred in Tasmanian waters. The High Court acknowledged that the law was “unquestionably a burden on the interstate trade and commerce in crayfish caught in South Australian waters and sold in Tasmania”. But the law did not discriminate between crayfish from South Australia and crayfish from Tasmania. There was “no discriminatory protectionist purpose” appearing on the face of the law. The object of the law was “to assist in the protection and conservation of an important and valuable natural resource, the stock of Tasmanian crayfish”.

Provided WA restricts its border closures to what is reasonably necessary to keep the virus out or suppressed inside the WA border, the High Court will leave well alone. The pressures on McGowan will come both from Frydenberg in Canberra turning off the money tap to those governments wanting special assistance for lost economic activity on account of their lockdowns, and from WA citizens anxious to return to a more normal life, living with the virus. This will become a growing pressure as evidenced by the WA farmers last week expressing dissatisfaction that they could not import sufficient labour to help with their bumper crops.

The High Court won’t be breaking the logjam. The court won’t be forcing borders to open more quickly than premiers wisely responding to all political and financial pressures from their constituents and from Canberra.  Meanwhile, McGowan will be able to call Palmer’s bluff.

This article first appeared in Eureka Street on 10 September 2021.