Easter Homily: women have witnessed to the truth. 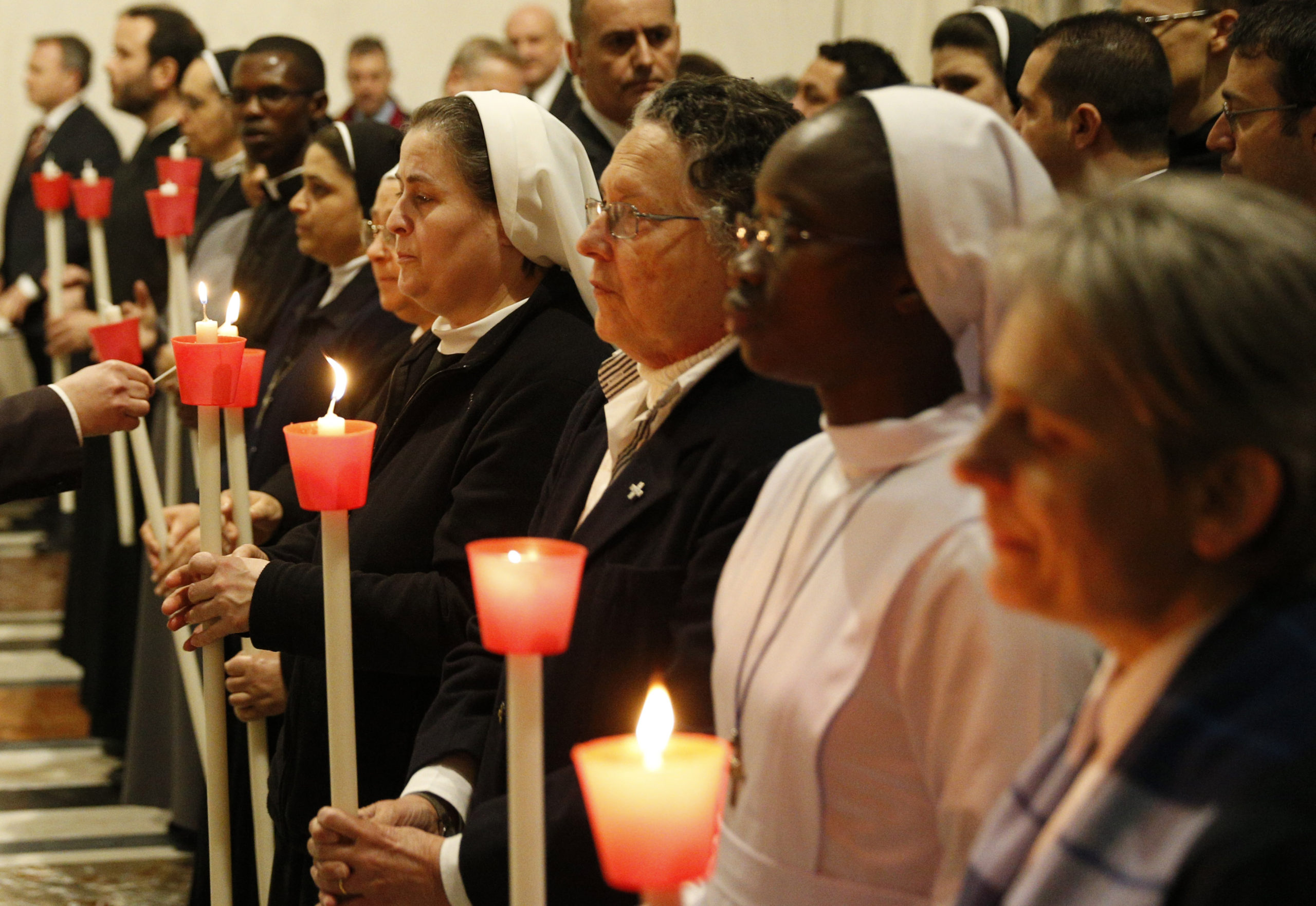 Women religious hold candles as they attend Mass marking the feast of the Presentation of the Lord in St. Peter's Basilica at the Vatican in this Feb. 2, 2017, file photo. (CNS photo/Paul Haring) See VATICAN-LETTER-SISTERS Jan. 30, 2020.

Women have been commissioned to lead the way as our society makes its way out of the present commotion of disrespect, discrimination and violence.

Happy Easter! As the young man in the white robe in tonight’s gospel (Mark 16:1-7) says, ‘There is no need for alarm’. All that the three women have seen so far in this gospel passage is an unexpectedly empty tomb. They came expecting to find Jesus’ body. They brought spices to anoint the corpse. These three women witnessed the crucifixion. So they knew Jesus was dead. Two of them saw the body being put in the tomb. They saw the stone being rolled in front of the tomb. So they knew precisely where the body was laid. Presumably the author of Mark’s gospel intends us, the readers, to understand that these three women were well familiar with the three predictions of the passion in three movements earlier in the gospel: that Jesus was to suffer, and that he did; that he would be put to death, and that he was – he was crucified; and that he would rise to new life after three days, whatever that might mean.

An angel tells them that Jesus has risen, he is not here. He has gone ahead to Galilee where he first called the disciples. The angel tells the women to go and tell the disciples ‘and Peter’. Peter is not singled out as the once and future pope. Remember, he is the one who pledged that he would follow Jesus all the way, only to betray him three times before hearing the predicted cock crow. He is singled out because he, the great betrayer who promised most and delivered nothing, will need the greatest reassurance that he is expected back on board with the risen One.

The planners of this Easter liturgy end our gospel reading just one verse before what many commentators take to be the last verse of the original version of Mark’s gospel. That verse is truly alarming. The women don’t go and tell the disciples as they were instructed. Rather they run away from the tomb, frightened out of their wits and telling no one about their experience because they are afraid.

During our Lent, we have witnessed groups of women in the public square joining together belatedly to anoint the already decaying body politic with spices. Women have witnessed to the truth. Women have been commissioned to lead the way as our society makes its way out of the present commotion of disrespect, discrimination and violence. Understandably many women remain frightened and afraid, telling no one about their experiences. But there is hope of new life. The message is getting out.

Many of those involved in the commotion of the public square have no specific religious affiliation. Many of those suffering the effects of the COVID pandemic and economic downturn have no religion. Some of our more inspiring atheists write in papers like The Guardian. This week, The Guardian’s regular columnist John Harris asked, ‘How do faithless people like me make sense of this past year of COVID?’(29/3/21) He acknowledged, ‘Like millions of other faithless people, I have not even the flimsiest of narratives to project on to what has happened, nor any real vocabulary with which to talk about the profundities of life and death.’ He concluded: ‘For many of us, life without God has turned out to be life without fellowship and shared meaning – and in the midst of the most disorientating, debilitating crisis most of us have ever known, that social tragedy now cries out for action.’ As Easter people gathered at the table of the Risen Lord, we have both fellowship and shared meaning. We have a paschal narrative of passion, death and resurrection – life in the midst of death, hope in the midst of despair, the possibility of forgiveness in the midst of depravity, and joy in the midst of human foibles and failings.

The recently deceased Jonathan Sacks who was Chief Rabbi of the Orthodox synagogues in the United Kingdom published his last book Morality: Restoring the Common Good in Divided Times in 2020. He reminded us that ‘a free society is a moral achievement’. He insisted: ‘Societal freedom cannot be sustained by market economics and liberal democratic politics alone. It needs a third element: morality, a concern for the welfare of others, an active commitment to justice and compassion, a willingness to ask not just what is good for me but what is good for all of us together. It is about “Us”, not “Me”; about “We”, not “I”.’

Sacks argues that there are at least three areas where the contribution of religion to the moral basis of society is a continuing and essential one: ‘religion creates community, community creates altruism, and altruism turns us away from self and towards the common good.’ Sacks asserts that ‘when morality is outsourced to either the market or the state, society has no substance, only systems. And systems are not enough. The market and the state are about wealth and power and they are hugely beneficial to the wealthy and the powerful but not always to the poor and the powerless ….When there is no shared morality, there is no society.’

Too many people think that we can outsource morality either to the state or to the market. We can’t. Life together in community is about much more than letting the market decide or following only the dictates of the state.

At Easter, we Christians celebrate all that allows us to contribute to a better state and to a better market so that the common good might be realised for all, including those without market power or state power. At Easter, we, like the women in tonight’s gospel, hear the message, admit our fears, and commit ourselves afresh to anointing the body politic with spices and to proclaiming the good news that the Lord is risen, that there is life beyond death, that there is meaning beyond suffering, that there is hope beyond betrayal like Peter’s threefold denial of Jesus, that there is a mission to be fulfilled beyond the confines of Rome or Jerusalem, and that fellowship and meaning are offered us in abundance at the empty tomb and here at the table of the Eucharistic banquet. Let’s celebrate ‘that as Christ was raised from the dead by the Father’s glory, we too might live a new life’ (Romans 6:4).