Public servant to the First Australians.

In Australia, there have been many children of the manse who have gone on to be great contributors to Australian society, regardless of their own religious faith or practice. Barrie Dexter was one of them.

Barrie often heard his father repeating Jesus’ own proclamation of Isaiah’s plea for justice in a broken world:

‘The Spirit of the Lord is on me,
because he has anointed me
to proclaim good news to the poor.
He has sent me to proclaim freedom for the prisoners
and recovery of sight for the blind,
to set the oppressed free,
to proclaim the year of the Lord’s favour.’

Barrie’s father Walter was one of the great Anglican chaplains in World War I before then ministering at Geelong Grammar and in Victorian rural parishes. Barrie recalls often attending the Anzac dawn service with his father in Geelong and in Melbourne. Jocelyn and Brigid have similar memories as children being accompanied by their father Barrie here in Canberra. 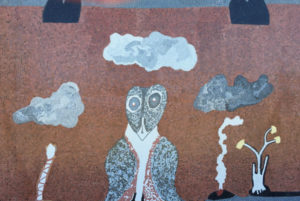 When being interviewed for his oral history at the National Library, Barrie said, ‘I think my father retained his beliefs right through, although perhaps after the first world war these beliefs were a little bit shaken. What was God doing allowing such an appalling thing as the first world war to happen?’ Reflecting on his father’s faith journey and his own, Barrie said, ‘But I don’t think it affected his faith ultimately. I guess that all of us became less than faithful after we left school and probably it was the effect of the war as much as anything on us that did this, when we were seeing people killed around us and so on and you wonder about the logic of life.’ Barrie was not a regular church goer. When asked, he would describe himself as an Anglican. He told his National Library interviewer:

‘I believe quite fiercely in the principles of Christianity. I guess what has had an impact on me as well as the war years … there have been two things. One has been the amount of work I have had to do at various times in my life what has not left me time for anything. You know, it’s been seven days a week grind, long hours. (Brigid and Jocelyn could attest to that, as did Judith and Tim.) And the other thing is that I’ve lived in so many different societies that perhaps I have some doubts about the dogma of the church. I’m very much impressed with Buddhism, for instance. I’m not a Buddhist by any stretch of the imagination. I’m very much impressed with Confucianism, Daoism and so on. But I would describe myself as a Christian even though I’m not a churchgoer except on particular occasions.’

Jocelyn and Brigid are right to think that Barrie would have been very home here at the Australian Centre for Christianity and Culture as a venue for his last earthly farewell — here in the chapel beside the splendid mural (pictured above) of the Holy Spirit in Our Land by the late renowned Elder, Lawman and painter of the Gija People (East Kimberly), Hector Jandany. The mural wonderfully bridges Indigenous and Christian spirituality through an interpretation of life of the Spirit in the land and the lives of its people. The original painting was commissioned by Sir William Deane when he was governor general.

We recall that Sir William delivered the eulogy at the funeral of Barrie’s colleague on the Council for Aboriginal Affairs, Dr Nugget Coombs. Deane highlighted Coombs’ capacity to argue passionately for the welfare of Aboriginal Australians and their right to be different: ‘different in their human, material and spiritual relationships — to each other and to the land and its resources’. Barrie had the same vision, capacity and passion. Coombs had delivered the eulogy at their colleague Professor Bill Stanner’s funeral when he spoke of Stanner’s ‘comprehension of the spiritual and poetic qualities which lent [Aboriginal society] coherence and gave meaning to the universe of which it was a part’. Dexter shared that comprehension with Stanner and Coombs.

Barrie had issues with church dogma and ‘what you might call the political performance of the church over the last two thousand years that it leaves a rather sour taste’. But like the suffering servant in Isaiah, he did not shout or cry out, or raise his voice in the streets. A bruised reed he did not break, and a smouldering wick he did not snuff out. In faithfulness he brought forth justice; he did not falter nor was he too discouraged — though Billy Wentworth and Gordon Bryant provided their challenges, to say nothing of the Department of Interior. He persevered until he saw land rights legislated in the Northern Territory — the establishment of some justice on this part of the earth. 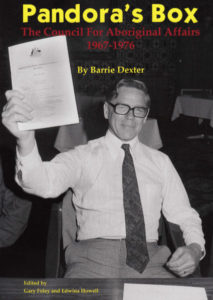 In his delightful self-deprecating mode, Dexter says that after the 1967 referendum Prime Minister Harold Holt was looking for someone who was ‘honest, just, sympathetic with underdeveloped or deprived peoples, knows his way backwards through the public service and [would] not squeal when he was kicked.’ When asked by Holt to join the three-member Council for Aboriginal Affairs with Coombs and Stanner, Dexter replied, ‘But I don’t know anything about Aboriginals.’ Holt said, ‘That’s why I asked you to take on the job. I’m frightened by the people who think they do know something!’ Dexter then said, ‘Mr Prime Minister, you are asking me to open Pandora’s box!’ Holt replied, ‘That is precisely what I am asking you to do, Barrie.’

Years later when the job was done, Barrie wrote an account of his stewardship to his minister Ian Viner who with Jim Cavanagh enjoyed Barrie’s highest adulation. Viner replied, thanking Dexter for his insights and assistance, having come to his position ‘as a “new chum” in Aboriginal Affairs as well as to the Ministry.’ He confided:

‘It seemed to me that we had a common approach through a simple philosophy and fundamental truth — all men and women are equal in the sight of God and deserve to be accorded the dignity of that status within the Australian community. Where it has been diminished by disadvantage or discrimination or inadequacy on the part of Govern­ments, then that is where the resources of the Department of Aboriginal Affairs should be directed.’

With Brigid and Jocelyn, we thank God for the life of Barrie — their father and father of Tim, husband of Judith, and public servant to the nation, especially to the First Australians. We pray in thanks that the Lord is Barrie’s shepherd; he shall not want. The Lord now maketh Barrie to lie down in green pastures, leading him beside the still waters.

How fitting that the formal eulogy will now be delivered by Patricia Turner one-time CEO of the Aboriginal and Torres Strait Islander Commission, and deputy secretary of the department of Prime Minister and Cabinet. Nothing gave Barrie greater pleasure than to see Aboriginal Australians replacing him and taking their rightful place in the administration of the nation, determining the best use of Pandora’s box.

This article was first published in Eureka Street on the 15th of April, 2018.