FRANK BRENNAN SJ. Timorese have had a win but could still lose big-time

Without any media fanfare, Foreign Minister Julie Bishop published a statement on 9 January 2017 announcing that Australia and Timor Leste had agreed to terminate the 2006 Treaty on Certain Maritime Arrangements in the Timor Sea (CMATS). 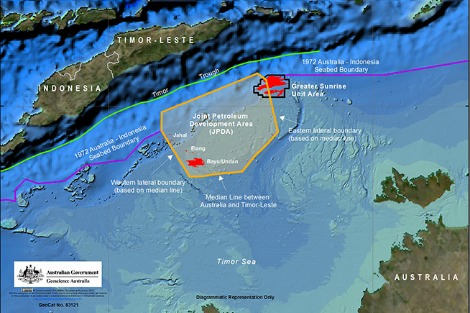 This news is more welcome to the Timorese government than to the Australian government. But the uncertainty created by this Timorese win might in time impact more adversely on Timor than on Australia. Only time will tell.

The starting point of any moral and prudential assessment of the announcement must be an acknowledgment that the self-determining, sovereign government of Timor Leste has achieved its objective of forcing Australia to the table to negotiate maritime boundaries in the Timor Sea.

Australia had not always been the unwilling party when it came to the negotiation of maritime boundaries. Back in 2004, Australia was keen to commence the protracted negotiations, knowing that ultimately Australia and Timor would need to be joined by Indonesia at the table to finalise boundaries delimiting the maritime jurisdiction of all three countries in the Timor Sea.

In 2004, Timor was already reaping the benefits from the Bayu Undan oil and gas deposit which was being extracted north of the median line between Australia and Timor Leste. Under the 2002 Timor Sea Treaty, Timor was entitled to 90 per cent of the upstream revenue from any deposits within the Joint Petroleum Development Area (JPDA) covering the area in dispute between Australia and Timor.

The next major deposit to come on line after Bayu Undan was Greater Sunrise which straddles the eastern lateral line between the JPDA and the area clearly within Australia’s jurisdiction.

Under the 2002 Treaty, Timor would have been eligible only for 18 per cent of the upstream revenue (90 per cent of 20 per cent) because 80 per cent of the Greater Sunrise deposit lay within the Australian jurisdiction if the eastern lateral line remained in place.

“Timor has, at least for the moment, taken a huge gamble.”

It was the Timorese leaders, not the Australians, who proposed in 2004 that boundary negotiations be put on hold and that a more creative solution for the development of Greater Sunrise be found. The Timorese were confident that Sunrise could be developed promptly. The Timorese leaders were delighted when they convinced the Australians to agree to a 50-50 upstream revenue share for Sunrise. Also, the Timorese were given the exclusive right to manage the water column inside the JPDA which meant that they could issue fishing licences there.

The parties agreed to extend the delay in negotiation of a maritime boundary from 30 years to 50 years, thinking this would provide ample time for the exploitation of Sunrise and any other petro carbons discovered in the JPDA. Such a delay suited Australian officials, who were getting worried that the Indonesians might want to revisit their earlier boundary determinations which could look disadvantageous to Indonesia considering what the Timorese might manage to negotiate, given recent developments in the international law of boundary delimitations.

In January 2006, the Australian and Timorese governments signed CMATS but the violence and political disruption in Timor meant a one year delay on ratification by the Timor parliament and president. During 2006, Australia once again despatched peacekeepers to Timor at the request of the Timor government.

Despite the upheavals in Timor as well as the complexity of some of the provisions in CMATS, (including a novel proposal that some of the treaty provisions would be resurrected if mining occurred even after one of the parties had terminated the treaty), Australian Foreign Minister Alexander Downer insisted on Australian parliamentary approval of the treaty without the usual time allowed for scrutiny by the Joint Standing Committee on Treaties (JSCOT). In a very non-partisan stance, JSCOT reported:

‘The CMATS Treaty contains new and important obligations and raises different issues which should have been subject to the usual process of scrutiny and review. In this instance the national interest exemption should not have been invoked before the Committee was given a reasonable opportunity to consider and report on the Treaty within the Government’s timeframe.’

Things started to turn sour when the joint venturers for Sunrise informed both governments in 2010 that their preferred development options were FLNG (floating liquid natural gas) or piping the gas to Darwin for processing. The Timorese were hoping that the joint venturers could be convinced to pipe the gas to Timor across the Timor Trough so that industry might be developed on the south side of Timor. The joint venturers insisted that any development plan had to provide the ‘best commercial advantage consistent with good oilfield practice’. They were adamant that a pipeline to Timor with subsequent processing in Timor was a third option, and never likely to be first.

“The Timorese will need to convince the Indonesians to give less weight to their own islands when it comes to drawing the lateral line. This could take many, many years. After all, Timor and Indonesia have not yet succeeded in finalising their land borders.”

Being flush with funds from Bayu Undan, the Timor Government could by this time afford very good legal advisers, including Sir Michael Wood and Vaughan Lowe from the United Kingdom. They advised that if a boundary negotiation were complete, there was every chance that the whole of Greater Sunrise would fall within Timor’s jurisdiction. Timor would then be able to dismiss the joint venturers who were unwilling to contemplate development in Timor and to enlist a developer sympathetic to Timor’s nationalist development goals.

The significance of the 9 January announcement is that Timor has, at least for the moment, taken a huge gamble. Timor has forfeited the right to manage the water column inside the JPDA and it has agreed to a reduced share in the upstream Sunrise revenue from 50 per cent to 18 per cent should it be developed before the finalisation of maritime boundaries. Were the eastern lateral to remain where it presently is, Timor would then be entitled to no more than 20 per cent of the upstream revenue flow.

Timor’s legal advisers are arguing that the eastern lateral should be drawn more favourably for Timor so that the whole of Sunrise then falls within Timor’s jurisdiction. But here is the big risk. The present eastern lateral has been used in the past by Australia, Portugal and Indonesia — all claiming that a line of equidistance giving equal weight to all islands is appropriate. Before the Timorese come to negotiate the eastern lateral determining the exclusive economic zones of Australia and Timor, they will need to negotiate that first part of the eastern lateral determining the territorial seas and the contiguous zones of Timor and Indonesia. The Timorese will need to convince the Indonesians to give less weight to their own islands when it comes to drawing the lateral line. This could take many, many years. After all, Timor and Indonesia have not yet succeeded in finalising their land borders. And Indonesia has already indicated that it would prefer to finalise its maritime borders north of Timor involving only the two countries before they come to consider boundaries south of Timor which will require all three countries to be at the table.

I applaud the Timorese leaders for their persistence in scrapping CMATS. CMATS was a good deal at the time, but it had reached its use-by date once the Timorese lost interest in the development of Sunrise without the prospect of onshore development in Timor. From here the stakes are high. The Timorese may get the whole of Sunrise but then they will need to find a developer willing to incur the added cost and uncertainty of a pipeline across the Timor Trough and subsequent development in Timor. Then again, they may be left with only a 20 per cent share in any future Sunrise development rather than the 50 per cent presently on the table, and in the meantime, they will have lost the exclusive right to manage the water column inside the JPDA. For Timor, the prospective gains are astronomical; for Australia, they’re peanuts. That’s the ongoing tragedy of this long running battle between David and Goliath in the Timor Sea. The Timorese have had a win, but they could still lose, big time.

Frank Brennan is a Jesuit priest and professor of law at Australian Catholic University. This article was first published in Eureka Street on 16 January 2017.