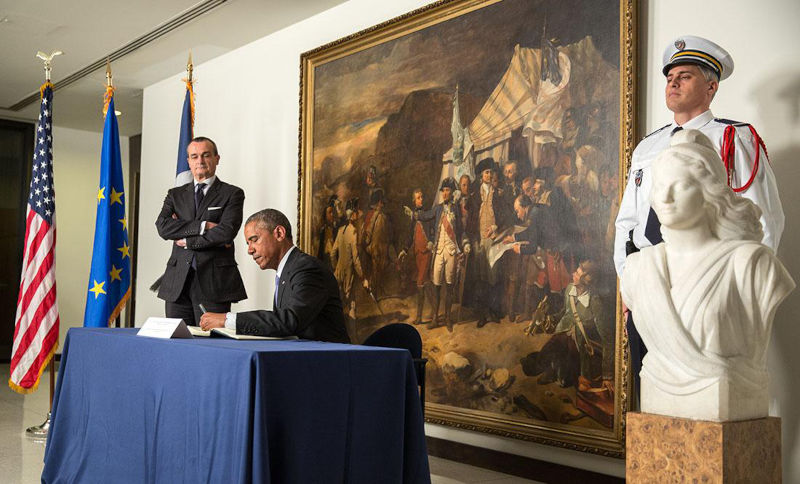 France’s ex US Ambassador Gérard Araud criticised Washington for frequently violating international law and said its so-called “rules-based order” is an unfair “Western order” based on “hegemony.” He condemned the new cold war on China, instead calling for mutual compromises.

The top French diplomat warned that the United States is engaged in “economic warfare” against China, and that Europe is concerned about Washington’s “containment policy,” because many European countries do not want to be forced to “choose a camp” in a new cold war.

Araud condemned US diplomats for insisting that Washington must always be the “leader” of the world, and stressed that the West should work with other countries in the Global South, “on an equal basis,” in order “to find a compromise with our own interests.”

He cautioned against making “maximalist” demands, “of simply trying to keep the Western hegemony.”

Araud made these remarks in a November 14 panel discussion titled “Is America Ready for a Multipolar World?“, hosted by the Quincy Institute for Responsible Statecraft, a think tank in Washington, DC that advocates for a more restrained, less bellicose foreign policy.

Gérard Araud’s credentials could hardly be any more elite. A retired senior French diplomat, he served as the country’s ambassador to the United States from 2014 to 2019. From 2009 to 2014, he was Paris’ representative to the United Nations.

Before that, Araud served as France’s ambassador to Israel, and he previously worked with NATO.

He was also appointed as a “senior distinguished fellow” at the Atlantic Council, NATO’s notoriously belligerent think tank in Washington.

This blue-blooded background makes Araud’s frank comments even more important, as they reflect the feelings of a segment of the French ruling class and European political class, which is uncomfortable with Washington’s unipolar domination and wants power to be more decentralised in the world.

The ‘rules-based order’ is actually just a ‘Western order’

In a shockingly blunt moment in the panel discussion, Gérard Araud explained that the so-called “rules-based order” is actually just a “Western order,” and that the United States and Europe unfairly dominate international organisations like the United Nations, World Bank, and International Monetary Fund (IMF):

To be frank, I’ve always been extremely skeptical about this idea of a ‘rules-based order.’

So that’s the first element: this order is our order.

And the second element is also that, actually, this order is reflecting the balance of power in 1945. You know, you look at the permanent members of the Security Council.

Really people forget that, if China and Russia are obliged to oppose [with] their veto, it is because frankly the Security Council is most of the time, 95% of the time, has a Western-oriented majority.

So this order frankly – and you can also be sarcastic, because, when the Americans basically want to do whatever they want, including when it’s against international law, as they define it, they do it.

And that’s the vision that the rest of the world has of this order.

You know really, when I was in – the United Nations is a fascinating spot, because you have ambassadors of all the countries, and you can have conversations with them, and the vision they project of the world, their vision of the world, is certainly not a ‘rules-based order’; it’s a Western order.

And they accuse us of double standards, hypocrisy, and so on and so on.

So I’m not sure that this question about the ‘rules’ is really the critical question.

I think the first assessment that we should do will be maybe, as we say in French, to put ourselves in the shoes of the other side, to try to understand how they see the world.

Araud argued that if the international community is serious about creating a “rules-based order,” it must entail “integrating all the major stakeholders into the managing of the world, you know really bringing the Chinese, the Indians, and really other countries, and trying to build with them, on an equal basis, the world of tomorrow.”

“That’s the only way,” he added. “We should really ask the Indians, ask the Chinese, the Brazilians, and other countries, really to work with us on an equal basis. And that’s something – it’s not only the Americans, also the Westerners, you know, really trying to get out of our moral high ground, and to understand that they have their own interests, that on some issues we should work together, on other issues we shouldn’t work together.”

“Let’s not try to rebuild the Fortress West,” he implored. “It shouldn’t be the future of our foreign policy.”

Gérard Araud revealed that, in Europe, there is “concern” that the United States has a “containment policy” against China.

“I think the international relationship will be largely dominated by the rivalry between China and the United States. And foreign policy I think in the coming years will be to find the modus vivendi … between the two powers,” he said.

He warned that Washington is engaged in “economic warfare” against Beijing, that the US is trying “basically to cut any relationship with China in the field of advanced chips, which is sending a message of, ‘We are going to try to prevent you from becoming an advanced economy.’ It’s really, it’s economic warfare.”

“Really on the American side is the development of economic warfare against China. It’s really cutting, making impossible cooperation in a very important, critical field, for the future of the Chinese economy,” he added.

Araud pointed out that China is not just “emerging”; it is in fact “re-emerging” to a prominent geopolitical position, like it had for hundreds of years, before the rise of European colonialism.

He stressed that many countries in Asia don’t want to be forced to pick a side in this new cold war, and are afraid of becoming a zone of proxy conflicts like Europe was in the first cold war:

So we need to have a flexible policy of talking to the Chinese, because talking is also a way of reassuring them, trying to understand their interests, also to define our interests not in a maximalist way, of simply trying to keep the Western hegemony.

Araud challenged the idea that the United States must be the unipolar “leader” of the world, stating:

The Americans entered the world, in a sense, being already the big boy on the block. In 1945, it was 40% of the world’s GDP.

Really, it’s always striking for foreigners, as soon as there is a debate about American foreign policy, immediately people say, ‘We have to restore our leadership.’ Leadership. And other countries may say, ‘Why leadership?’

West must ‘try to see the world from Beijing’

Gérard Araud similarly criticised Western media outlets for their cartoonishly negative coverage of China. The top French diplomat called on officials to “try to see the world from Beijing”:

When you look at the European or Western newspapers, you have the impression that China is a sort of a dark monster which is moving forward, never committing a mistake, never really facing any problem, and going to the domination of the world – you know, the Chinese work 20 hours a day, they don’t want a vacation, they don’t care, they want to dominate the world.

Maybe that if we will try to see the world from Beijing, really we will consider certainly that all the borders of China are more or less unstable, or threatened, or facing unfriendly countries, and that’s from the Chinese point of view.

Maybe they want to improve their situation. It doesn’t mean that we have to accept it, but maybe to see, to remember, that any defensive measure of one side is always seen as offensive by the other side.

So let’s understand that China has its own interests. You know, even dictatorships have legitimate interests. And so let’s look at these interests, and let’s try to find a compromise with our own interests.

Araud went on to point out that the US government is constantly militarily threatening China, sending warships across the planet to its coasts, but would never for a second tolerate Beijing doing the same to it:

And obviously my interlocutors didn’t understand what I meant. And that’s the question, you know, really trying to figure out what are the reasonable interests of the other side.

Araud stressed that China “is not a military threat” to the West.

French diplomat: Western sanctions on Russia are causing us to ‘inflict pain on ourselves’

With this new cold war between the United States and China, Gérard Araud explained, “in this context, Russia is a bit like Austria-Hungary with Germany before the First World War, is a bit doomed to be the ‘brilliant second’ of China.”

While Araud harshly denounced Russia’s February 2022 invasion of Ukraine, he also criticised the Western sanctions on Moscow, which he cautioned, “on the European side, it is inflicting to ourselves some pain.”

He warned that Europe is in a “dead end” with Russia, “because as long as the war in Ukraine will go on, and my bet unfortunately is that it may go on for a long time, it will be impossible for the Europeans, and the Americans in a sense, but also for the Europeans to end the sanctions on Russia, which means that our relationship with Russia may be frozen for an indefinite future.”

“And I think it’s very difficult to have diplomatic activity [with Russia] in this situation,” he added.

Ben Norton is a journalist, writer, and filmmaker. He is the founder and editor of Multipolarista, and is based in Latin America. (Publicaciones en español aquí.)