From our readers: Collaery trial an affront to democracy 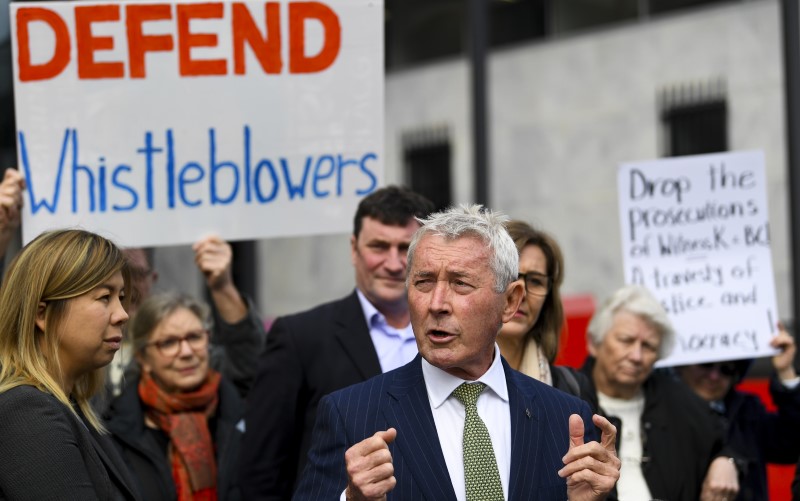 In letters to the editor: Australia and East Timor, climate action, and do we really need our own military?

Susan Connelly’s account of the government’s persecution of Bernard Collaery and Witness K this week inspired some passionate letters this week, as did Brian Martin’s question as to whether Australia really needs any submarines (or even a military). We also heard from readers on Australia’s lack of climate change action and the housing affordability crisis.

Australia shredded all decency in the persecution of Bernard Collaery.

Susan Connelly’s timely reminder of the political persecution of Bernard Collaery fails to mention another sordid and disturbing side to this “spy” saga, the manipulation that allowed Woodside to harvest helium from the Timor gas field without any cost in royalties to either Timor or Australia, an “oversight” that has already cost both countries an estimated $2 billion in lost revenue! To rub salt into the wound, Australia then had to buy back what was arguably our helium at a premium price after Woodside had exported it overseas from its Darwin facility.

These events are comprehensively documented in Collaery’s comprehensive expose of what Geoffrey Robertson describes as “Indonesian brutality, Australian chicanery and oil company greed” in his book Oil Under Troubled Waters, in spite of the significant legal and political “gagging” he still endures.

My already low opinion on the calibre of our politicians plummeted to new levels on reading this dissertation. Australians — and our friends the Timorese — definitely deserve better! — Dave Donald, Weipa, Queensland

A succinct appraisal of an affront to democratic norms: blatant spying for commercial advantage, secret trials, and persecution of innocent whistle-blowers. As this article argues, all of these devious legal proceedings only serve to protect John Howard and Alexander Downer. Another reason is to deter others from exposing government trickery and abuse of trust. Where is the justice when the government refuses to show Bernard Collaery the evidence it purports to have, which necessitates secrecy? And, where is “mainstream media” on this issue? Some may say this is only one case, just “a blip” on the legal “radar screen”. This is utterly wrong: secret trials have a way of becoming the norm; after all, we already have secret investigations enshrined in law don’t we! — Robert Harwood, West Hobart, Tasmania

Do we need a military? — Brian Martin

Submarine sideshow: Does Australia even need a military?

Defence strategy and capability is insurance against potential actions of an uncertain enemy. The Australian psyche wallowed in a siege mentality; apparently many have lusted after us. Newspapers heralded “The Russians Are Coming”. They have been quite tardy. Brian Martin challenges us to consider doing without this insurance policy. Given remote chances of actually needing to repel an attack, we could try self-insuring. The “chicken coup” defence posture tells us, while we spend so much on building walls around a diminished lifestyle, we miss opportunities to improve what’s inside the chicken coup. Have we done our due diligence as to where threats will come from and in what form they will arrive? The risk is minimal as Martin suggests. Is it not likely that a much more powerful nation than our own would come to our aid if armed conflict occurred? Let’s self-insure and spend the money on adding value instead. Negate the pugilistic combat mentality that delivers human rights violations and costs squillions. Self-insure. — David Muscio, Woonona, NSW

Climate emergency: Australia must come in from the cold

Climate action leader Ralph Evans’ statement is comprehensive and should convince more people to agree with climate action now. Despite the best efforts of brilliant leaders at COP26, our world’s trajectory is probably “2.4 degrees Celsius … by the century’s end”. Obviously, the world must try harder to be closer to the Paris-preferred, safer 1.5C. Evans is certain that the UN Framework Convention on Climate Change, with its IPCC reports and COP summits, is the best system and “the best hope we have of avoiding a climate change catastrophe”.

As a great grandmother keen on climate action for most of the past 20 years, I am certain that Australia needs a new, clean energy reforming government to lead with policies and actions during the rest of this last opportunity decade. Global warming is already deadly and could become unstoppable and existential. Our current fossil fuel fixated government is arrogant and defiant against the indisputable science and danger. Why? Why on Earth? Our future is invaluable….

During the coming federal election, opposition parties, plus any other wise colleagues, must run an almighty campaign for climate action including a fair transition to a jobs laden, profitable and safer clean energy future. — Barbara Fraser, Burwood, Victoria

The housing affordability problem in Australia is at its worst in the major cities where the average property value is near to or exceeds $1 million. I live in the regions where the average property value is less than half that value. It makes no sense for governments to be spending bloated property prices to accommodate those unable to find affordable accommodation in the big cities. There are adequate homes in the regions that could be purchased for $300,000 or rented for $250 per week. Why should I support any government to spend money on housing people in the big cities at costs that far exceed what housing could be provided for in the regions.

It is time policies were directed toward getting people to move to places where affordability was not the issue. The more people move the greater the jobs availability will become. Property values in the big cities are and always will grow exponentially faster than housing needs can be met. Investment in jobs in the regions not only provides better income potential and housing for people but it will provide a release valve on rising property values in the big cities.

It is time to accept we cannot choose to live in the most expensive cities dependent on the generosity of taxpayers, many if not most who live in more modestly priced accommodation. — Geoff Ellis, Smithfield, Queensland