Analyses of the economic effects of global warming by prominent economists are based on patently invalid arguments, profound ignorance of the global response to solar energy and basic misrepresentation of scientific sources. Their conclusion that the effects are minor is egregiously in error and use of their analyses to advise governments has placed the world in peril.

Economist Steve Keen has published a critique (and summary) of analyses by William Nordhaus and others of the effects of global warming on the global economy. Those analyses, incorporated into official IPCC reports, suggest the effects of global warming are minor. Keen’s critique reveals the analyses to be absurdly deficient, reflecting not only profound ignorance but patently invalid arguments and a lack of scholarly integrity.

Nordhaus is very prominent in his profession and is a recipient of a faux-Nobel prize. According to Keen, Nordhaus established a pattern for analysing the effects of global warming in a 1991 paper that many subsequent analyses have followed.

Briefly, Nordhaus and others conflate geography with time, they conflate climate with weather, and they conflate global climate with local temperature. They show no awareness of the complex responses of the atmosphere, oceans and biosphere to changes in the global energy budget. They exclude tipping points and other nonlinear effects for reasons that misrepresent current scientific understanding. Although claiming to have surveyed literature, they exclude for no clear reason studies and authors who predict larger effects.

Nordhaus and his ilk conclude that warming by 4°C would reduce global GDP by between 3% and 7% compared with business and climate as usual. Credible scientists, on the other hand, warn that any warming above 2°C risks potentially catastrophic consequences and 4°C of warming could collapse industrial civilisation and dramatically reduce the human population.

Nordhaus claims that many sectors of the economy, accounting for 87% of GDP, would not be affected at all by global warming, on the basis that they can be conducted in ‘controlled environments’, meaning essentially indoors. That includes all manufacturing, wholesale and retail trade, finance, communication, transportation, government services and underground mining.

Agriculture, forestry, fisheries and some mining are ‘exposed to the weather’, and therefore considered to be affected by global warming. Several approaches are used to estimate those effects.

One approach is to look for correlations of the geography of productivity with local average temperature at the present time. They note local temperature has only a weak relationship with, for example, Gross State Product in the USA. This weak spatial relationship is then used to estimate how production will be affected globally by temporal increases in global temperature.

Thus they conflate climate with weather and local temperature. The presumed equivalence of spatial and temporal temperature variations betrays a fundamental failure of critical scientific thinking. It betrays an obliviousness to the complex responses of the atmosphere, oceans and biosphere to changes in the global solar energy budget. These responses are evident even now, in the forms, for example, of increased intensity of storms and dramatic spikes in bushfire severity. Many people have already experienced substantial breakdowns in communication and transport as a result.

The claimed equivalence of space and time variations implies, for example, that the ecosystems of Ohio would just migrate, rapidly, to Hudsons Bay, or that the Great Barrier Reef would relocate to Tasmania. As it happens the topsoil of Hudsons Bay was scraped south to Ohio by the Laurentide ice sheet and warming will not reverse that process.

In truth some species can move, others cannot, and ecosystems are being torn apart. This results in some going extinct and others being released from controls and becoming plagues and epidemics.

Nordhaus and others use a ‘damage function’ to relate temperature changes to productivity changes. The chosen mathematical form of the function is a quadratic, which is a smoothly varying curve that cannot describe the effects of tipping points, which would cause sharp kinks in the relationship. This form is used for temperature increases up to 3°C or more on the alleged basis that there are no ‘critical tipping elements with a time horizon less than 300 years’ until at least 3°C of warming.

The studies claimed to justify this assertion, by Lenton and others in 2008 and 2019, in fact clearly state that the melting of Arctic sea ice is at risk of tipping with warming between 0.5 and 2°C, and note that at least five other system elements ‘could surprise by exhibiting a nearby tipping point’. Nordhaus and others thus fundamentally misrepresent the scientific studies they invoke.

Nordhaus also attempted surveys of ‘expert’ opinions in 1994 and 2017. In the former, out of 18 respondents 10 were some kind of economist. The estimates of climate effects by the non-economist respondents were 30 times larger than those of the economists, but this did not deter Nordhaus from concluding the effects would be minor. One respondent, an atmospheric scientist, explicitly refused to give an estimate, saying essentially that he marvelled at the naïvety of translating the complexities of atmospheric response into a single global number and thence into effects on economies. The later survey, by Nordhaus and Moffat in 2017, used search methodologies that excluded non-economists.

This is a telling comment, as it relates to the profound misdirection of the field of neoclassical economics, the form that currently dominates world policy. The accurate statement would be that natural scientists know little about the incredible adaptability of the models of human societies used by neoclassical economists. Historians and archaeologists might have a different view of the adaptability of human societies.

Neoclassical economists actually know as little about real human societies as they do about real ecosystems. They hold to an abstract vision of an economy (and society) that self-corrects and returns to a near-equilibrium state after any external shock. It is easy to show that real economies are in fact always far from equilibrium, as are ecosystems, and their behaviours are therefore radically different from the neoclassical vision. This is the topic of Part II.

Dr. Geoff Davies is a retired geophysicist who has explored economics for over two decades. He is the author of Dynamic Earth, Sack the Economists and Economy, Society, Nature; . 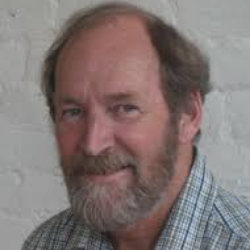