The Prime Minister’s intervention last week to take charge of China policy and begin to set out a clearer framework for managing the relationship was much too late and probably too little, but it was a welcome start nonetheless.

For some time, commentators across the spectrum from thinktanks, academics, business and universities have been urging the PM to show leadership on the management of one of Australia’s most important bilateral relationships, and to arrest its downward spiral, and end the vilification of Chinese living or studying in Australia by a cabal of conservative commentators.  Most recently, Linda Jakobson and former Australian Ambassador to China, and long-time China watcher, Stephen Fitzgerald, called on the Prime Minister to develop a “narrative” for managing the relationship.

It is telling that the Prime Minister chose to make his speech when his Foreign Minister was out of the country.   Management of the relationship was just too important to be left to the Foreign Minister to carry and whose department has, on China policy, been marginalized by Canberra’s security, defence and intelligence establishment.

Former Prime Minister Kevin Rudd’s attack on the PM’s initiative to try to get relations back on track is self-serving.  Far from kowtowing to China, the PM showed a rare streak of statesmanship.  Rudd may still be smarting at Turnbull’s refusal to back him for the UN Secretary General job.

As for kowtowing to China, nothing was perhaps more poorly judged than the decision to have then Foreign Minister Stephen Smith announce Australia’s withdrawl from the Quadrilateral Dialogue of Democracies while standing next to China’s Foreign Minister Yang Jiechi in the Australian Parliament House.

At difficult times in relations between nations, acts of statesmanship are needed to protect and advance the national interest.  When in 2009, under Rudd, the bilateral relationship had reached its lowest point in a decade, the Chinese, in an act of statesmanship, sent Executive Vice Premier, Li Keqiang, at short notice, to Canberra to help us get out of the hole we were intent on digging.

Rudd and Li agreed on a joint statement on managing the relationship.  The joint statement was up until then something that had been resisted by Canberra for fear the Chinese would take advantage of us.  In the event, a realistic and practical set of principles were crafted which would still be useful today in guiding management of the relationship.

Turnbull’s speech has done no more than to acknowledge the obvious, that China’s rise makes it a major force in regional affairs and that Australia, as a principal beneficiary of China’s growth, welcomes China as a responsible, active, participant in regional affairs (a far cry from the Foreign Minister’s speech in Singapore last year in which she declared that China could not provide regional leadership because it was not a democracy).  It also acknowledged other realities, such as Australia’s having an interest in China’s Belt and Road Initiative.

Most importantly, however, the speech sought to reassure Chinese living in Australia, especially those studying, and those who might be considering coming here, that they were welcome in the Australian community.  After the sino-phobic presentation of the case for the anti-foreign interference bill, and the populist cheering for it by sections of the media and some credentialed commentators, a correction was necessary.

Obviously, this was no casual speech.  The choice of the University of NSW, with a big Chinese student population and active collaborative research projects with China, and the presence of both the Chinese Ambassador and China’s Consul General in Sydney were telling.  It is most unusual for both the Ambassador and Consul General to be present at such an event.  Timing for all principal actors would have had to be carefully coordinated in advance.  In view of the poor state of the relationship, the Chinese Ambassador would have consulted Beijing about his attendance.

At the very least, the speech can be expected to have arrested the decline in the relationship.  Contrary to Rudd’s assertion in his Sydney Morning Herald column, the key phrases in the speech would not have been discussed in advance with the Chinese.  Australia simply does not work that way.  However, agreement, at least in principal, would most likely have been reached for the Foreign Minister to visit China, ending an embarrassing absence of some two years.  A date can be expected to be announced soon.  This will indicate that relations are moving back to a more normal business-like level.  The Foreign Minister’s visit will likely prepare for a Prime Ministerial visit and perhaps agreement to resume the suspended annual Australian business jamboree in China.

But there are risks to this return to normality.  Despite the PM’s speech, Canberra remains deeply conflicted over how Australia should view and deal with China.  In the past, the PM has stated that Australia did not see China as a strategic rival.  This did not prevent him or his Foreign Minister acting as if it were.

The Trump Administration has declared China is a strategic rival to the US.  It is already taking hostile actions under Section 3O1 of its Trade Act against China aimed at China’s 2025 Made in China which aims for China to be an advanced manufacturing nation in areas such as robotics and AI.   Having aligned Australia’s foreign policy and defence forces so closely to the US, Australia is in effect opting to frame its relations with China based on strategic mistrust not strategic cooperation.

A single speech does not make a foreign policy, but it will contribute to re-framing both policy and, importantly, public discussion about Australia’s relations with China.  The mess our China policy has been in since the election of Trump is attributable mainly the difficulty Canberra has had in coming to grips with the reality of the new global order in which it finds itself.

America First may be a suitable policy for Trump to pursue, but it is not for Australia.  In the new multipolar order Australia needs to begin to develop its own independent foreign policy.  This creates a unique opportunity for the Opposition as it looks to assuming power, something akin to what Whitlam understood before 1972.

This article first appeared in the Australian Financial Review

Geoff Raby is a former Australian Ambassador to China. 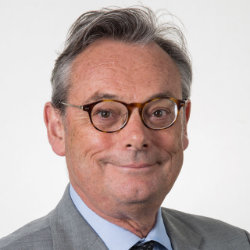