GIDEON RACHMAN. Revenge on the US is sweet for Vladimir Putin. 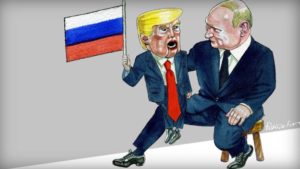 The Washington foreign policy establishment has experienced many emotions since the Trump-Putin summit in Helsinki: incredulity, fear, anger. But foremost among those emotions is a profound sense of humiliation. Here was the US president disgracing himself on an international stage, while the Russian president looked on, smirking.

For Vladimir Putin, inflicting this kind of embarrassment on America is deeply satisfying. The Russian president’s worldview is built around the idea that the west has deliberately weakened and humiliated Russia for decades. For Mr Putin, it is payback time.

To visit Moscow now is to enter a hall of mirrors in which every Russian act of aggression is reflected back, as a necessary response to supposed western aggression.

In the US and UK, Russia is seen as a violent state that has annexed Crimea and waged an undeclared war in eastern Ukraine. The Russian response is that the western allies have committed greater acts of aggression in Iraq and Libya and have threatened Russia directly, by expanding the Nato alliance up to its borders. Russia’s annexation of Crimea is portrayed as a defensive measure in Moscow, designed partly to ensure that the Russian navy’s base in Sevastopol never plays host to Nato ships.

What about the accusation that Russia has subverted American democracy? The Putinist response (beyond a pro forma denial) is that the US has long attempted to subvert the Russian political system. Hillary Clinton’s explicit support for the anti-Putin protests in Moscow in 2011-2012 was never forgiven by Mr Putin, and may have inspired him to work against the Democratic presidential candidate in the 2016 US election.

Viewed from London or Washington, one of the most chilling aspects of Mr Putin’s Russia is the way in which it backs violence, from Ukraine to the UK, and then systematically lies about it. Discussing this tactic with official Russia is difficult, since they will never acknowledge they are lying. But, between the lines, the Putinista defence is twofold: first, that the west lies as well; second, that Russia is under siege, and that deception and lies are a necessary defence mechanism.

In that sense, the official Russian line about world affairs is simultaneously completely cynical and utterly sincere. The Russian government is in the business of propagating lies about its own behaviour and the wider world.

But it sincerely believes that these lies are justified as part of a broader campaign against western dishonesty and aggression.

The same mixture of cynicism and sincerity applies to the personal conduct of officials. One view of Mr Putin and his inner circle is that their motives are utterly venal. As one Russian friend put it to me: “The only thing that really upsets them is if you get between them and the cash machine.”

Yet while corruption runs deep in Russia, that does not mean Mr Putin and his advisers are not also genuine nationalists.

As a result, Russia and the west can observe the same set of events and see different things happening. The way in which this plays out struck me while watching the England vs Colombia World Cup football match recently in a bar in Russia. When England were awarded a penalty and several Colombian players were booked, this seemed to me confirmation that England’s opponents were a dirty team who were being justly punished. To the Colombian fans sitting around me, the same set of events proved that the match was fixed and the referee was biased against them.

In a similar way, my view is that Russia has intervened violently in Ukraine, shot down a civilian aircraft and then poisoned people in Britain, and so has been hit with economic sanctions. The Russians look at the same events and conclude the economic sanctions are further proof of the ingrained Russophobia of the west. (It was never a penalty and the ref is biased!)

Acknowledging these differences of viewpoint should not mean succumbing to total relativism. Mr Putin and his acolytes are wrong to blame all the setbacks that the Russian state has experienced since 1991 on western plots. The countries that joined Nato after the end of the cold war did so of their own volition because they had a deep fear of Russia, based on their own recent history. The marchers who took to the streets of Moscow in 2011-12 were not American puppets. They were real Russians with real grievances. Similarly, the economic and political chaos in Russia in the 1990s was not “imposed on Russia by the west”, as the Putinist ideology would have it. It flowed from the collapse of the Soviet system and later mistakes by the Russian government.

But now the American democratic system — triumphant in 1989 — is itself in deep trouble. Russia, meanwhile, is once again treated by a US president as a peer superpower.

For Mr Putin, it is a moment of sweet revenge. For American liberals, it should be a cause for reflection. Much of what has gone wrong in Mr Putin’s Russia flows from its failure to deal with domestic problems in favour of an effort to blame the west for all the country’s woes. Now it is tempting for American liberals to blame Russia for their Donald Trump nightmare. But the real problems, in both countries, begin at home.

This article was published by the Financial Times on the 23rd of July 2018.

Gideon Rachman became chief foreign affairs columnist for the Financial Times in July 2006. He joined the FT after a 15-year career at The Economist, which included spells as a foreign correspondent in Brussels, Washington and Bangkok.

He also edited The Economist’s business and Asia sections. His particular interests include American foreign policy, the European Union and globalisation.