GILES PARKINSON. AGL bought Liddell for nothing – what will it cost Turnbull?

One of the late billionaire Kerry Packer’s famous quotes about business was that you only get one Alan Bond in your lifetime, a reference to his ability to sell the Nine Network to the late entrepreneur for a small fortune and then buy it back at a fraction of the price.

But for Australia’s big energy utilities, the procession of Alan Bonds keeps on coming … and coming and coming and coming – in the form of the nation’s politicians. Prime minister Malcolm Turnbull’s Coalition government is just the latest in a long series of political patsies to turn up at their doorstep.

The proposal to extend the life of Liddell in increasingly looking like a proposal of breath-taking stupidity – a decision that would do the exact opposite to its stated purpose of boosting reliability and lowering costs. It would kill innovation and new investment, and lead to huge questions about probity and markets.

AGL has made a big deal about its decision to get out of coal, but the reality is that it only just got into this dirty but profitable business.

The giant Loy Yang A brown coal generator in Victoria was bought in 2012 and the Bayswater and Liddell coal generators in NSW in 2014. And while it plans to close Liddell in 2022, when it turns 50, Bayswater won’t be closed until 2035 and Loy Yang in 2048.

It’s not exactly a rush to the exit, and as Turnbull and now the Murdoch press are pointing out in their confected horror, AGL is making a lot of money out of the coal business.

But they are able to do so largely by the actions of the Coalition government – the killing of the carbon price, the investment freeze as it sought to do the same to the RET, and its refusal to address market failures where the incumbents are able to charge $6 million for a single megawatt of capacity.

Now that there is a market signal – because of the high prices caused by Coalition policy – for innovative solutions, Turnbull and Co are trying to kill those with a crude intervention driven only by the fossil fuel ideologues in the party.

But here’s the thing. AGL bought Liddell for an effective price of zero from the NSW Coalition government. Thats right: zero. The total price for 4,600MW of Liddell and Bayswater was a knock down $1.5 billion.

Given AGL valued Bayswater at $780 million and the cheap coal supply (just $1.50/gigajoule) arranged by the NSW government at $768 million (Subsidy? What fossil fuel subsidy), AGL’s valuation of Liddell started and finished with a big fat O (see table below).

As we noted in this story The 2,000MW coal generator that the NSW government sold for $0, AGL were quickly boasting about this table below: 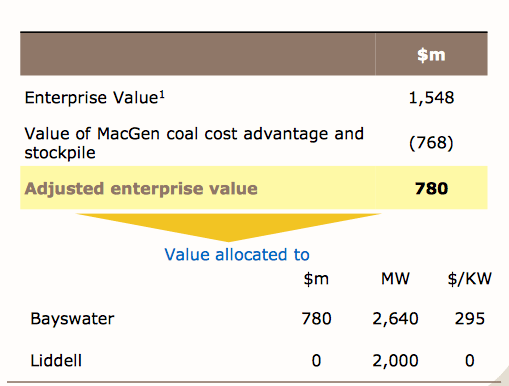 But what if someone wanted to buy it now? Estimates of how much it would cost a buyer to upgrade the decrepit Liddell to keep it running for another 5 years vary between $500 million and a $1 billion.

In its current state it hardly meets AEMO’s definition of a reliable generator and would probably be the last thing it would turn to in the case of a power emergency. 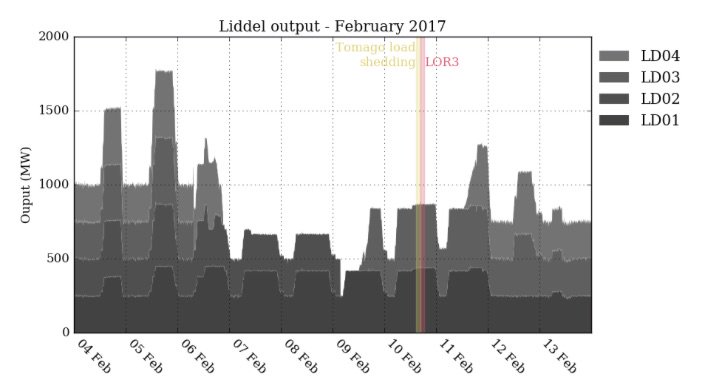 In fact, Liddell is more likely to be the cause of a power emergency because of what AEMO describes as the potential for ageing coal generators to fail in the heat – and in last summer’s heatwave, Liddell was missing 1,000MW of its capacity due to problems with boiler tube leaks.

(See graph above, the red vertical line shows the day in question – only two units were operating and had been operating in the previous days. 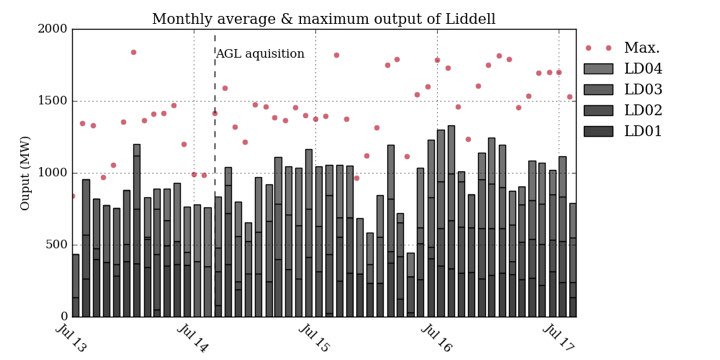 Here’s some more facts about Liddell. On average it only operates at around half of its capacity, as this graph above shows. Sometime it is a lot less.

But here is a particularly damming statistic, on the table below. Liddell rarely operates with all four units running – just 18.5 per cent of the time (this average from 2013 calculated by Dylan McConnell from the Climate and Energy College in Melbourne) 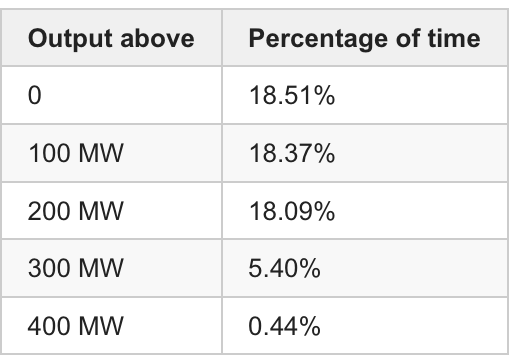 When Liddell’s four units operate at the same time.

Even more striking, the amount of time it operates all four units at levels of 400MW (their capacity is actually 500MW) is just 0.44 per cent of the time. It probably makes Liddell less useful to the market operator than the solar panels on Turnbull’s Point Piper mansion.

Local Labor MP Joel Fitzgibbon is not kidding when he says of Liddell: “It’s 45 years old … it’s clapped out. It’s now the most inefficient and dirtiest power generator in the country.” And yet Turnbull and the Coalition is citing this a solution.

On top of the refurbishments, there are also the rehabilitation costs – AGL recently estimated these at a total of $898 million, for both Liddell and Bayswater, so let’s consider half for Liddell.

It’s unlikely that any sort of buyer – such as Delta’s Trevor St Baker, who picked up Vales Point from the NSW government for $1 million – would want to be lumped with a half billion rehabilitation costs. So that’s where the  Turnbull government may have to step in.

That money is used to try and return the site as close as normal to its original state, and removing building and infrastructure, and remediating disturbed land.

But AGL is also looking to have a tender for what could follow at Liddell, and there is no reason something like a solar plant could not be built, as has occurred around the now closed Collinsville and Northern power stations. AGL has said that Liddell’s output could be replaced by wind, solar, battery storage and pumped hydro.

But that whole process is now put at risk by Turnbull’s extraordinary intervention.

Apart from delivering all the selling power to AGL – and any other coal-fired operator who might sniff an opportunity to announce an early closure – he is effectively killing off planned investment in the technologies that might have replaced it.

The very idea that there would be a one on one negotiation on this would appear to be a breach of probity rules. Why not have an auction? Oh, but isn’t that what AEMO has actually proposed.

As one senior developer told RenewEconomy: “This is throwing the energy market into chaos. Forward markets and prices are constructed on the planned forward closures… the government has again just sent the market into  chaos making investment decisions impossible again.”

“This is being done for totally political reasons and there is no logic whatsoever in this.  If the government is seriously concerned about future supply run a reverse auction for new capacity starting 2022… they won’t as they know that the new capacity won’t be coal capacity.”

It’s so true. Turnbull and the Murdoch media have mocked the idea of using things like demand management, and battery storage. But here’s the rub. Such technologies would not just be cheaper and cleaner, but faster and more reliable. It’s a quadruple bottom line that appears to be beyond this government.

This article first appeared in RenewEconomy on 7 September 2917