GILES PARKINSON. Coal on limited lifespan as CCS hopes go up in smoke

The coal industry is facing a new crisis point as a group of leading scientists call for the construction of new coal generators to cease within three years, and as the industry’s flagship “clean coal” and carbon capture and storage project went up in smoke in the US.

As reported elsewhere on this web site, the US energy utility Southern Co finally gave up on its much-vaunted Kemper coal gasification and CCS project, after costs soared from $US1.8 billion to more than $US7.5 billion ($A10 billion), and it realised it wasn’t going to work.

On Wednesday, US time, it announced it would cease operations immediately on the coal component of the project, and just use the asset as a gas generator. Shareholders already saddled with $US3.1 billion of losses face a further $US3.4 billion write down if Southern Co can’t convince regulators to pass those costs on to consumers bills.

In an article in Nature magazine, more than 60 scientists and prominent leaders, including the former UNFCCC secretary Christiana Figures, and former ACTU president Sharan Burrow, now general secretary of the International Trade Union Confederation, say the world has three years to set emissions on the right course. 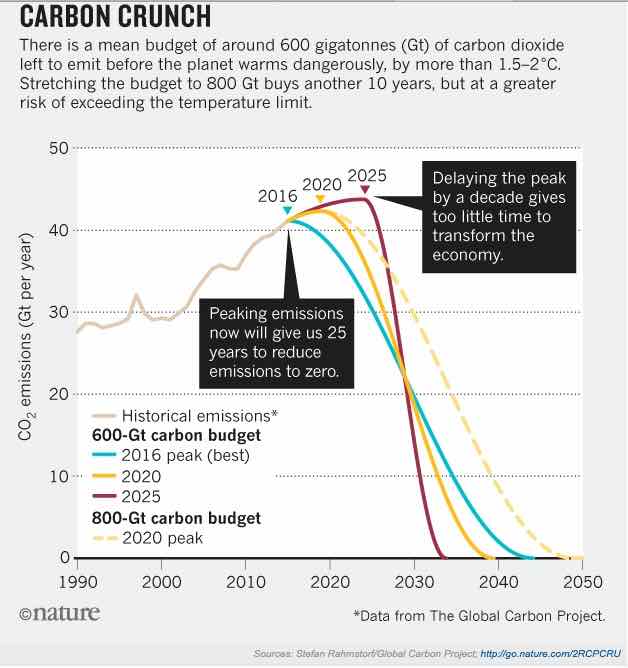 It recommends a six-point plan, including no new coal generators post 2020, accelerating wind and solar and other renewables, retiring all coal-fired generators and boosting electric vehicles.

“The climate math is brutally clear: While the world can’t be healed within the next few years, it may be fatally wounded by negligence until 2020,” writes co-author Hans Joachim Schellnhuber from the Potsdam Institute for Climate Impact Research.

“Action by 2020 is necessary, but clearly not sufficient – it needs to set the course for halving CO2 emissions every other decade.”

He drew an analogy to Moore’s Law, which states that computer processors double in power about every two years, by saying that the ‘carbon law’ can become a self-fulfilling prophecy to mobilise innovation and market forces. “This will be unstoppable – yet only if we propel the world into action now.”

The call by the group echoes a similar, if slightly more cautious warning by the International Energy Agency last month. But even the conservative IEA said that coal generation – if continued at current rates – could only have a life-span of 14 years if climate targets were to be reached.

Yet in Australia, conservative forces are pushing for more coal-fired generators to be built, and to be funded by government because the private sector has made it clear that they are not interested in such adventures.

They want them to be built in Queensland and Victoria. Prime minister Malcolm Turnbull has said it “would be nice” to see a new “state-of-the-art” coal generator in Australia.

The Coalition has also threatened to impose financial penalties on states than ban “fracking” by reducing their share of the GST take. “I think it needs a fair dinkum look,” Morrison told the Australian.

The scientists writing in Nature said that “all countries should adopt plans for achieving 100 per cent renewable electricity production, while ensuring that markets can be designed to enable renewable-energy expansion.”

They said “those in power must also stand up for science”, and saw the upcoming G20 summit as a moment to do just that, despite the attempts by the Trump administration to keep climate off the agenda.

“There will always be those who hide their heads in the sand and ignore the global risks of climate change,” the scientists write. “But there are many more of us committed to overcoming this inertia. Let us stay optimistic and act boldly together.”

Ironically, the Kemper failure came on the same day as the coal industry was effectively abandoned by a leading climate denier group, which suggested that CCS was little more than a “utopian dream” and would never be competitive.

The Global Warming Policy Foundation, led by former UK Chancellor of the Exchequer Lord Lawson, and whose advisory board includes Australian geologist and climate denier Ian Plimer, said CCS had been promoted for too long on the basis of wishful thinking.

“Successive governments haven’t thought their policies through. The focus on renewables is making CCS – already a marginal technology – even less viable. A coherent strategy could reduce carbon emissions at a fraction of the current cost by switching to gas with the option to install CCS if/when it makes economic sense.”

In other words, it suggests that coal plants be abandoned in favour of gas, because it would be cheaper to reduce emissions. The GWPF is no fan of renewables, but it accepts it has put CCS, and coal, out of business.

And in even more depressing news for the Australian coal industry, the GWPF acknowledged that major markets like India are likely to wind down coal imports in favour of gas (and we would suggest renewable energy).

The Climate Council’s Andrew Stock, who oversaw the construction of the last three large gas power stations on Australia’s east coast, said the news about Kemper should serve as a serious warning as the Federal Government continues to flag potential plans for “clean coal” in Australia.

“Coal is always polluting, regardless of whether the technology is “ultra super critical”, “high efficiency low emissions” or “carbon capture and storage. The Federal Government’s must instead urgently transition to clean, affordable and secure renewable energy and storage technology.”

Giles Parkinson is the publisher of reneweconomy.com. This article was first posted on that site on 29 June 2017.