GILES PARKINSON. Finkel decoded: The good, the bad, and the very disappointing

The Finkel Report on the future of the national electricity market falls short of its opportunity to redefine energy markets. It has been focused on trying to find a pathway through the toxic energy politics in Australia, and accommodating the Coalition’s modest climate targets, rather than seizing the moment and outlining what can and should happen, and what Australia would need to do to meet the Paris climate targets.

Here is our initial take on what the final Finkel Review all means.

In the first draft of the Finkel Review, chief scientist Dr Alan Finkel spoke of an “unstoppable” energy transition, driven by new technologies and the role of the consumer.

But but he may just have found a way for skittish politicians and incumbent utilities to throw a spanner in the works and slow it down. This report had the opportunity to redefine the energy markets. But, to borrow an expression, it reads more like history, at best, rather than Grid 2.0.

That’s because Finkel has been focused on trying to find a pathway through the toxic energy politics in Australia, and accommodating the Coalition’s modest climate targets, rather than seizing the moment and outlining what can and should happen, and what Australia would need to do to meet the Paris climate targets.

That is, it only modeled the Coalition’s initial down-payment for the Paris climate deal. It shows it a path to reach that, but not its likely obligations in a world that vowed to cap average global warming at “well below 2°C” and so can be seen as a huge victory for the incumbents.

We need a plan

Finkel emphasises there is no plan right now, and one is needed to manage the scale of the transition. “We need a plan,” he says.

So he has recommended a whole series of actions, including the Clean Energy Target (CET) and only because of opposition to the emissions intensity target. Other options such as a high renewable energy target were not considered, even though its is clear that wind and solar are the cheapest forms of new energy.

Finkel suggests a wave of market and regulatory reforms, but appears to rely heavily on the Australian Energy Market Commission (AEMC), whose snail-pace approach to reform and new technologies has driven most players crazy with frustration (apart from the incumbents, of course).

The suggestions include new market rules, particularly for distributed generation (household solar and storage), but it also demands AEMO set up a planning regime and review its own management practices, particularly on short-term forecasting. He proposes a new energy security board.

Wind and solar are cheaper

The report does acknowledge that wind and solar are the cheapest forms of electricity, even with storage (or the costs of firming– i.e. signing a contract with a gas generator) added. But we might have to wait a while for that fact to sink in for the government to truly absorb it.

Finkel insists the Clean Energy Target is the cheapest option. He wants the renewable energy target to end in 2020 and not be extended.

But despite the lower costs of wind and solar, he only sees the share of large-scale renewables creeping up to just 33 per cent by 2030, from 23.5 per cent in 2020.

The report predicts rooftop solar will only account for 11 per cent of total generation by 2050, which is more akin to AGL’s vision of the future, than the CSIRO report which credited nearly 50 per cent. This is hardly the Grid 2.0 he talked of in the draft.

The Coalition may be mollified by Finkel’s modeling that suggests some existing power stations will last longer, and cannot close without three years’ notice. The reasoning for allowing coal-fired power stations to stay longer in the system seems to be that this is a better outcome than having new fossil fuel generation.

Recommending a system that generates credits, and obligations on retailers, means that this powerful oligopoly reigns supreme.

Over the past few years we have seen how the all-powerful gen-tailers have been able to manipulate the renewable energy targets, first going on an investment strike, forcing policy changes, and then pocketing the benefits of the high LGC (Large scale Generation Certificates) price they created when they finally started signing contracts.

They have fought elements of carbon pricing, pushed back on energy efficiency and demand management schemes, and rule changes such as the 5-minute rule. By creating a new certificate scheme that puts the obligation on retailers, they again get to sit in the driver’s seat and protect their generation and retailing interests.

States will have to lead the way

It will again be up to the states to go it alone if they want a quicker transition and greater ambition. According to Finkel’s numbers, Australia will get to 42 per cent renewables by 2030, and just 33 per cent large-scale renewables). A cynic would say that was deliberately calibrated to fit in with the Coalition, given the way it criticised Labor’s 50 per cent renewable policy.

The states, however, have far higher ambitions – the ACT 100% by 2020, Queensland and the Northern Territory 50 per cent by 2030, and Victoria 45 per cent by 2025. South Australia is already well past its 50 per cent target for 2025. Finkel does not recommend that the states be forced to abandon their own targets (they can’t), and one can see why, although they will remain subject to partisan politics and the electoral cycle.

The most controversy among the industry will be around the storage issue and system reliability. The report recognises that battery and pumped hydro storage can give the grid the reliability and security it needs, but notes that in the short term, higher levels of flexible, gas-fired generation will be needed to support “variable” renewables.

Finkel suggests that new wind and solar plants, beyond 2020, be required to be paired with a certain amount of storage or contracts with “firm capacity”. The renewable energy industry might well ask, and they will: Why are renewable energy generators obliged to sign up for “dispatchable” generation and the coal and gas fires stations are not?

It was the failure of coal and gas plants last summer that put the grid at risk on most occasions. Yet under this recommendation, any new solar and wind plant built after 2020 will have to come with some measure of dispatchability or its own storage attached.

This is despite CSIRO and the networks saying repeatedly that any penetration of wind and solar below 40 per cent can be considered “trivial” and this target will not be met by 2030. AEMO will have some discretion over where and how much storage will be needed.

“This makes no sense and there are likely to be far cheaper and easier ways to manage the fact that output from wind and solar farms varies,” says Tristan Edis from Green Energy Markets. “Reliability isn’t a function of each individual power station, but all of them.” The Clean Energy Council is also concerned.

Coal gets to write the rules of its own exit

Another controversy is over the requirement for coal fired power stations to give three years notice on their retirement, but the rejection of any idea of a staged exit. This, more than anything, is designed to salve the far right, but NGOs say it makes no sense.

“Expecting coal-burning power stations to voluntarily nominate their closure date 3 years in advance is wildly unrealistic. In the absence of a government plan for orderly retirement of coal power stations, generators have been reluctant to signal their intentions and give their competitors a leg-up and that’s unlikely to change,” said Nick Aberle from Environment Victoria.

Tougher rules on all generators

Wind and solar plants might have to add their own storage, and they will also be required to provide voltage and frequency control, which should not be an issue. However, Finkel said an FCAS (Frequency Control Ancillary Services) market should only occur if there is a demonstrated benefit.

But Finkel has also identified a significant security issue with existing coal and gas generators, and has ordered AEMO to decide on a requirement for all synchronous generators to change their governor settings. This would provide a more continuous control of frequency and fall in line with international practice, and avoid some of the dramatic voltage swings that threatened more major blackouts last summer.

Will there be bipartisan political agreement? It’s not clear. It is neutral enough for both mainstream parties to find common ground, but might really be designed to soothe the coal-protecting, climate deniers in the Coalition back-room, and conservative voices in the media.

But the conservatives will protest anyway, and it is difficult to see how Labor can endorse a plan that undercuts renewable energy so comprehensively, and completely ignores the Paris climate agreement.

Even if bipartisan agreement on the design of a CET is agreed, there still needs to be a clear path to ramp up ambition and accelerate this transition. And there isn’t one.

As Finkel notes: The Australian, State and Territory governments must agree to a national emissions reduction trajectory. That is going to be hard to achieve, despite the fact that Australia has signed on to Paris.

The Coalition envisages a zero carbon grid in 50 years, climate experts says it needs to happen at least 20 years before that, and the CSIRO at least says that is eminently possible. 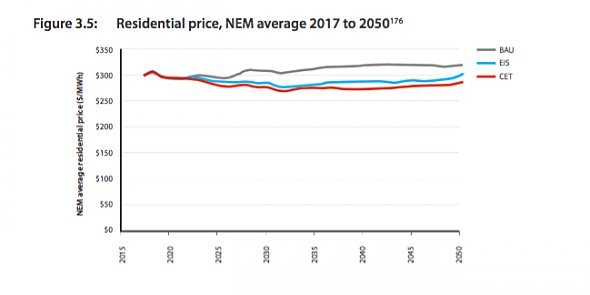 Cheaper prices? Will the consumer be king or not?

Will it reduce prices? Finkel says yes, the Clean Energy Target gives that indication in the graph above.

The key to wholesale prices will be in how it reduces the ability of the gas generators to impose high fuel costs and the way they control the market. Rule changes like the 5-minute settlement could help that, and so will increased competition from battery storage and demand-side initiatives, such as voluntary load shedding and energy efficiency.

But these are not big savings, and it seems to ignore the impact and the opportunity that the plunging cost of solar and storage will have for households and businesses. Why stay with the grid for a measly saving of less than $2 a week when solar and battery storage costs are likely to be one half of the cost of the grid? In 35 years time?

The question needs to asked: despite all the rhetoric, will the consumer still be king? The report talks of the need to reward consumers for the benefits they may offer in demand management and reducing network spending, but there is no talk of the substantial savings they could obtain from their own generation.

Finkel says it does not really matter whether the benchmark is set at 600kg of CO2 equivalent of every megawatt-hour, or 700, or even 800 or higher.

It will depend on what the actual carbon intensity target of the government is, and this will relate to the government’s climate policy and abatement targets. Given that these targets are so modest, that results in more coal generation in the system than would otherwise be the case.

Our coverage of the main Finkel findings can be found here, along with the reaction, and a look at his modelling.

Giles Parkinson is a journalist – a former business editor and deputy editor of the Financial Review, a columnist for The Bulletin and The Australian, and the former editor of Climate Spectator.

This article was originally posted on Renew Economy on 9 June 2017.

This entry was posted in Climate, Economy. Bookmark the permalink.