Leading economist professor Ross Garnaut says the clean energy target recommended by the Finkel Review could be useless in meeting current emission reduction targets, because technology change and coal retirements will get us there in any case.

Instead, Garnaut recommends a two-path strategy that he says could resolve the political impasse. One is a lowest-common denominator that leads to the current target, while the second is a higher-ambition Paris target that is adopted if the first pathway demonstrates that wholesale prices will fall.

And Garnaut is convinced they will fall, because of the growing impact of wind and solar power, and on the falling cost of renewable energy, and of battery storage and other technologies necessary to “firm” their output.

“Is the Clean Energy target, or some alternative means promoting energy necessary at all. Is it likely to have any effect at all? Is the debate much ado about nothing?” Garnaut asked in a public lecture on Monday ttitled Energy Security, Reducing Energy Costs and Mitigating Climate Change: Does Finkel Solve the Trilemma?,

“It is possible that continued cost reductions would cause the emissions reduction target modelled for the Review to be met without assistance from the CET,” he said.

“If that were to eventuate, the clean energy certificates would have no value, and the Clean Energy Certificates no role.”

Garnaut says Australia’s rich renewable energy resources could mean that Australia will emerge as the developed country with the lowest electricity costs, rather than the highest than it has now.

“We have the opportunity to be the energy superpower of the low-carbon world economy,” Garnaut says. “Wholesale electricity prices could be lowered not just from current levels, “but to prices that are notably low by global standards.”

Garnaut says it is clear that new build renewable energy in cheaper and new build coal, and much cheaper than gas, and thatstorage costs would likely also fall much further than modelled by the Finkel Review.

He also noted that the increasing intensity of extreme weather events and cyber insecurity are making the old centralised systems more vulnerable.

And while Garnaut says the Finkel Review  deserves much praise, particularly in its focus on energy security issues and its decision to leave the implementation in the hands of the Australian Energy Market Operator – its weakness was the failure to take into account the Paris climate targets.

That meant that its proposed baseline for emissions intensity did not differentiate between brown coal and black coal.

So instead Garnaut suggests that rather than trying to find away across the impossible divide to ideological and vested interests – which he says is a small proportion of the Australian community – support should be sought around two alternative trajectories for emission cuts, and allow the cost of electricity to determine which is followed.

“The first could be a Lowest Common Denominator trajectory, embodying a low level of ambition,” Garnaut says, adding nevertheless that it should be stronger than the current target of a 26-28 per cent reduction by 2030.

“The second could be called a Paris Trajectory, embodying a reasonable contribution to the global effort to hold temperature increases below 2 degrees and as close as possible to 1.5 degrees.” 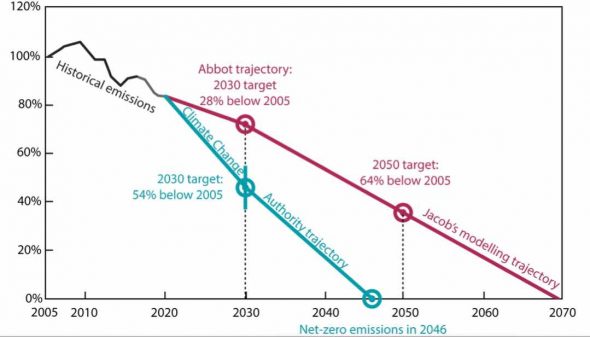 He suggests starting with the Lowest Common Denominator path, and should real wholesale prices fall, we would automatically shift to a Paris trajectory.

“What level of wholesale electricity price reductions, measured year by year and averaged over the major Australian markets, would trigger a shift from one trajectory to the other?

“I suggest that we take the average price for 2017 as a base, and shift to the “Paris” trajectory if and when the accumulated fall in real prices from the base year exceeds one percent per annum. The new arrangements would come into effect in 2021, so we would operate on the “Lowest Common Denominator” trajectory in that year unless the accumulated fall in prices from 2017 until 2020 exceeds three percent in real terms.

“It would be the cumulative reduction in prices from the base year that triggers change. There would be arrangements for smoothing transition from one trajectory to the other if these were so large as to be disruptive in some later year.

“We would stay on the steeper trajectory to 2050 if the fall in real prices until then had accumulated to one third. Most Australians who worry about increasing prices would take reassurance from that outcome.

Garnaut also made it clear that government investment in new generators, such as the new coal plant being promoted by the Minerals Council and Coalition MPs led by former prime minister Tony Abbott, would be a bad idea.

“Let’s embrace the new technologies, provide a more certain policy environment for their application, and accept some variation on the theme of the Clean Energy Target to drive faster expansion of the renewable energy that will force prices down.

“Let’s keep arbitrary interventions of government out of generation, to avoid unnecessary increases in the supply price of private investment. And let’s have our regulatory authorities ensure that there is genuine competition in all parts of the wholesale power market.”

This entry was posted in Climate, Economy. Bookmark the permalink.