A new analysis of the energy policies presented by the major and smaller parties contesting the Queensland state election shows that the Greens would deliver the biggest electricity savings, Labor would also push prices down, while One Nation and the LNP policies would force prices to rise. 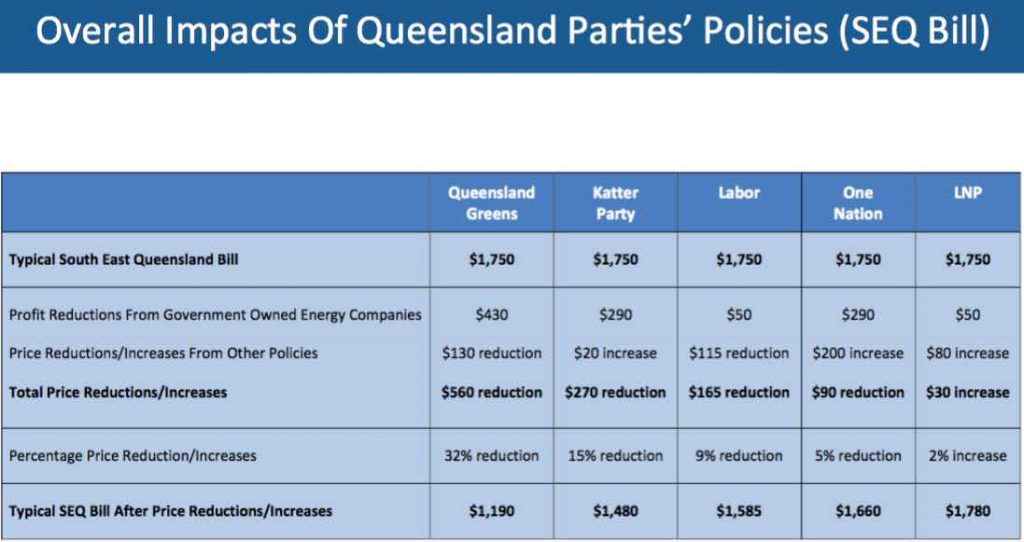 Energy has emerged as one of the key factors in the Queensland poll, which is proving impossible to predict because of the rise of One Nation, and the potential of both the Katter Party and The Greens to grab some seats.

The energy war is being fought on two levels: the LNP and One Nation are pushing for coal, and a new coal-fired generators, while the ALP and the Greens are focused on clean energy, and targets of at least 50 per cent renewables by 2030.

Policies are also being marked by potential write-downs of network assets, rebates, the creation of a third government generator, and the transformation of for profit utilities to non-profit institutions. Think electricity as a public service.

The analysis by Queensland-based energy expert Hugh Grant concludes that there would be a wide range of price impacts arising from the various policies, ranging from a price reduction of around $600 a year from the Queensland Greens’ policies, to a price increase of around $30 from the LNP’s policies.

The full report can be found here.

Grant says there are a number of factors driving the differing price impacts, but the key outcomes are the treatment of carbon and renewable policies, and how much profit from the government-owned energy companies the parties are willing to forego.

Out of an average bill of $1,750, around $500 are profits extracted by the Queensland government from the state-owned energy businesses.

Labor and the LNP are only willing to forego about $50 a year from that profit pool, while the smaller parties would give up a lot more: the Greens the full $500, and the Katter and One Nation parties around $300.

On carbon and renewables, Grant says that the Labor and Greens policies are broadly consistent with Australia’s international emissions reduction commitments, and recognise that renewable generation is now the lowest cost of new capacity.

“By contrast, One Nation and LNP are proposing policies that are inconsistent with Australia’s international emissions reduction commitments and are in denial of the economics of renewable generation,” Grant says.

“By scrapping the existing renewable energy targets, the LNP and One Nation are proposing to remove the only policies that are putting downward pressure on generation prices.”

Both LNP and One Nation want to support a new and “unwarranted and uneconomic” coal-fired power station in North Queensland, which Grant says would not only increase prices, it would also add to system security risks.

“The One Nation and LNP policies would result in ongoing policy chaos, driving further unnecessary increases to Queensland’s wholesale electricity prices and to the wholesale prices in the other states,” Grant says.

“They would also increase system security risks in Queensland and interstate.”

This article first appeared in RenewEconomy on 21 November 2017