NEG in the air as Nationals go for coal, and Barnaby goes nuts

The timetable for a final decision on the controversial National Energy Guarantee has been thrown into the air amid a renewed push for coal generation by the National Party following the Coalition’s “super-Saturday” by-election defeats last weekend.

Energy and environment minister Josh Frydenberg, trying to get Labor states to sign up to a hopelessly inadequate emissions target on one hand, and dealing with climate deniers in his own party on the other, said on Tuesday it could be another month before any final agreement is reached.

Frydenberg acknowledged that he won’t get final agreement from the states on August 10 at the next scheduled CoAG meeting, because of their refusal to sign a blank cheque to the Coalition on emissions.

Instead, Frydenberg will take the emissions component to an increasingly skeptical party room on Tuesday August 14, before having a hook up with CoAG energy ministers later that day, assuming they had made progress on the contested framework.

“What we have been talking about is to agree to the detailed design subject to a phone hook up after it’s gone through the party room, I hope,” Frydenberg said during an appearance at the Clean Energy Summit dinner in Sydney on Tuesday night.

“… And the legislation then goes out in exposure draft for a month and then any changes will then need to be made by the ESB, if necessary, and then it comes back to another agreement from the CoAG energy council,” Frydenberg said. 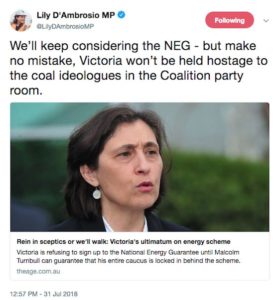 Victoria, Queensland and the ACT have indicated they will not sign up to the NEG without knowing that the Coalition party room is locked in behind it, and will not then re-neg on any emissions guarantee.

Their fears are being compounded by the actions of the Nationals and LNP, with Resources Minister Matt Canavan taking the extraordinary step of “dispatching” MP George Christensen to Japan to visit new coal generators and to try to drum up financing for a new facility in Australia.

That is a red line for the Labor states, and for most observers, simply because it’s a nonsense to suggest that a new coal-fired generator could do anything to address high electricity prices. All the modelling suggests that it would do the opposite, not to mention its impact on emissions.

Former Nationals leader Barnaby Joyce is also back on the war path, suggesting that if the emissions reduction burden falls on the agriculture sector – as it must do with such a weak target in electricity and if Australia is to meet its Paris targets – then that is “nutcase” stuff.

“If we go down that path then forget it, I’m out, see you later, goodbye,” Joyce told Sky News on Tuesday evening.

Interestingly, Frydenberg said it was a fact that “we are living in a carbon-constrained environment”. He talked of companies and banks who are factoring such things into their investment and financing decisions.

Meanwhile, the next step of the NEG was looking to the modelling done for the Energy security Board by ACIL-Allen, which, extraordinary, was not released or distributed to governments.

After pressure from governments, and from independent analysts earlier this week, the modelling is expected to be released on Wednesday.

Asked about this on Tuesday, Frydenberg questioned the “bona fides” of many of the 23 energy analysts saying that “these academics – a vast number have been openly critical on day one, so I do question their bona fides.”

Their opposition to the NEG is true enough, however, and focused mostly on the weak emissions targets – something which has been confirmed by the ESB in their final document.

The ESB admits that the emissions target will effectively be met before the proposed emissions obligation comes into effect. That means it will provide no incentive for new low-carbon generation investment.

Even ACIL Allen had pointed out – as far back as April – that it the electricity sector will account for less than 5 per cent of the target that Australia signed up for at Paris, despite accounting for one-third of total emissions and having the cheapest abatement opportunities.

Caught in the middle is the clean energy industry, with divisions running deep over whether it is best to sign up to a platform which may or may not be upgraded with a change of government, or to have no platform at all.

This article was published by RENewEconomy on the 1st of August 2018.

Giles Parkinson is a journalist of 30 years experience, a former Business Editor and Deputy Editor of the Financial Review, a columnist for The Bulletin magazine and The Australian, and the former editor of Climate Spectator.