South Australia is already being hailed – or in some quarters demonised – for its leadership on renewable energy technology.  A new report from the Australian Energy Market Operator highlights how far out in front it is in the transition to a consumer-powered grid.The earlier comments by Turnbull and Frydenberg are now looking even more petty and ill informed. 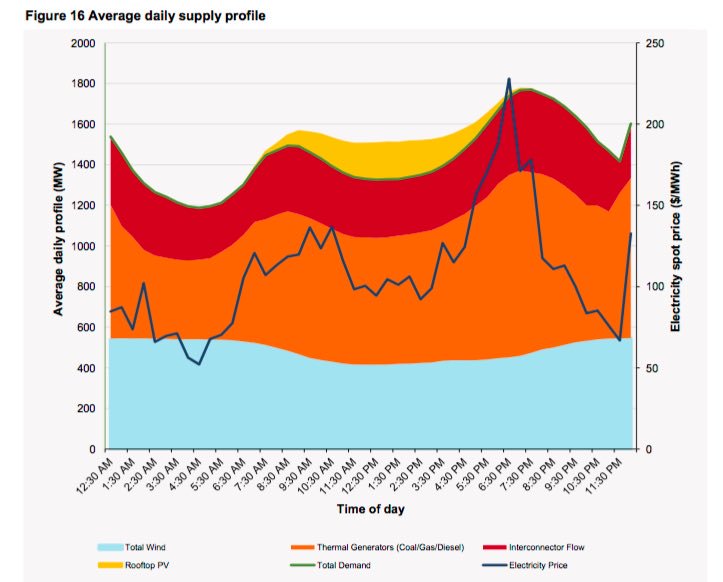 The new AEMO report highlights that 9.2 per cent of the electricity generated in the state over the last financial year came from small-scale (sub 100kW) of solar PV on the rooftops of households and businesses in the state.

(The graph above illustrates an average day in South Australia over the last year).

The total will likely at least double over the next 10 years – according to AEMO forecasts – to more than 20 per cent, at which time rooftop solar will be pushing “minimum demand” from the grid to zero on occasions.

It’s already having an impact. As we report here, rooftop PV sent grid demand to a new record low of 554MW on Sunday, just six weeks after a previous low – which had in turn beaten the earlier low set a week earlier than that by nearly 25 per cent.

It’s a taste of what is to come. Major studies by the likes of the CSIRO and the networks association predict that by 2050, half of all demand will be met by what they describe as “distributed generation” – a mix of rooftop solar, battery storage, and “localised” generation.

This represents a major shift from the recent and current state of the industry from centralised energy controlled by major corporations, to local supply and demand – leading to new players and new business models.

But in South Australia – as is the case with so much of the energy transition – it could come quicker than that. By 2025/26, AEMO says rooftop solar could generate 2,500GWh a year. That would be around 22 per cent of total demand in the state.

Add in the proposals by the Liberty OneSteel, the new owners of the Whyalla steelworks, and more than one third of the state’s demand could be met by such distributed solar, and possibly up to half if its plans for 600MW of solar – for itself and other business users – comes to fruition.

The low levels of grid demand on both Sunday and Saturday in South Australia pushed prices firmly into negative territory. Prices were as low as minus $1,000/MWh on some occasions and averaged minus $120/MWh for two hours on Saturday. It also created record low demand on the grid. 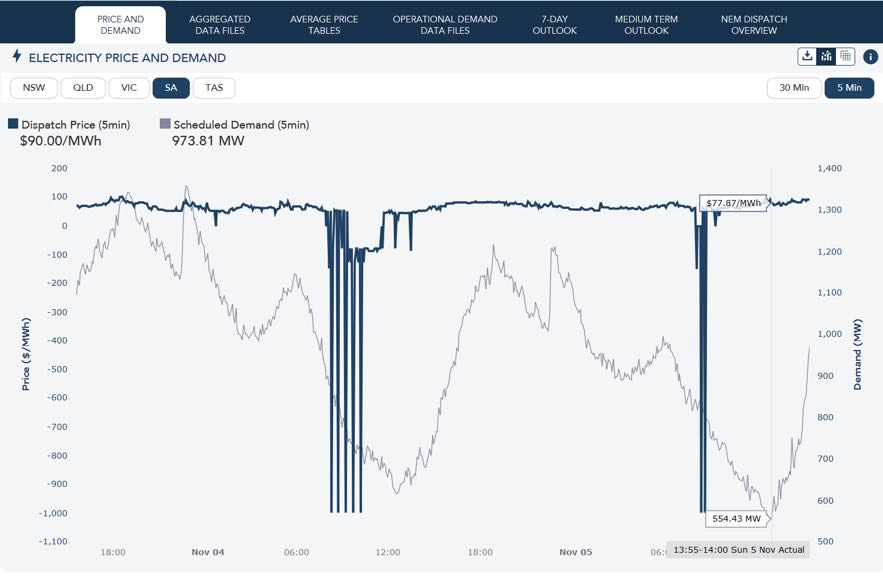 Indeed, average South Australia wholesale prices in the first four months of 2017/18 are lower than the coal-dependent states of Victoria and NSW.

It would have been cheaper than coal dependent Queensland too had not the state government instructed the state-owned generator to lower their prices.

Professor Ross Garnaut, the eminent professor whose solar and storage company Zen Energy is at the heart of the Liberty Onesteel proposal, describes this as an “historic re-ordering of South Australia’s position in the National Electricity Market”.

In a speech in Perth on Friday, Garnaut noted that the S.A. had always had higher prices than other states – in 2000 they were twice the price of other states due to the small number of powerful generators that could set the price in the market. 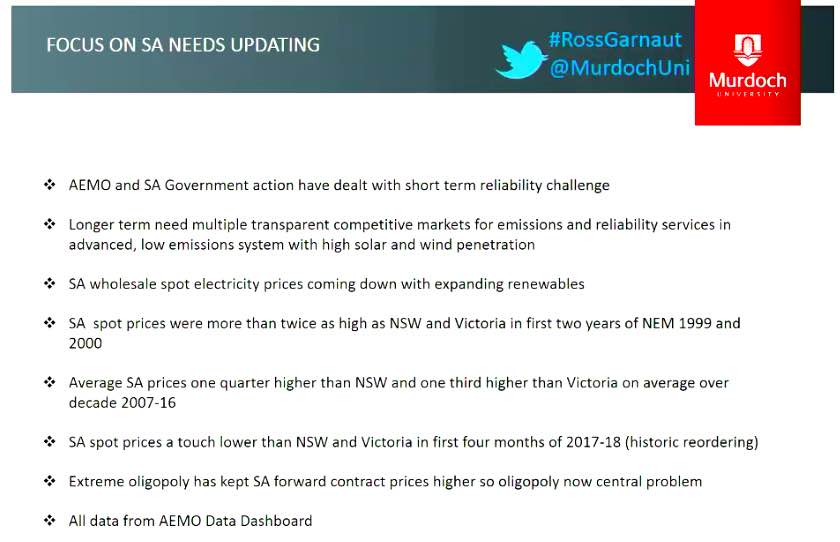 This was now changing as more renewables came into the market, and he said concerns about the reliability of the grid in S.A. were also overblown. (See this slide from his speech above).

“I think perceptions are a bit out of date,” Garnaut said.

Garnaut said the politicisation of the state’s system black last year – from a unique cyclonic event in a non cyclonic state – did focus attention on the need to run the grid in a different way. But it was clear that this was now being managed.

“South Australia gets half of its electricity from wind and solar …. and they are in the process of overcoming their problems and making systems of high penetration of renewables work,” Garnaut said. That is of  international interest.”

Indeed, the AEMO report notes that more than 48 per cent of South Australia’s generation in 2016/17 came from wind and solar.

And apart from the likelihood of adding another 12 per cent from rooftop solar over the next 10 years, there were significant new large-scale solar projects and wind projects, which would likely take the state to 70 per cent by 2020 and beyond in the years that follow.

These included the 220MW Bungala solar farm now being built, plus two other solar farms totalling more than 200MW near Whyalla, another 100MW solar farm at Tailem Bend, the 150MW solar tower and storage project near Port Augusta, and the Spencer Gulf pumped hydro storage.

All told, AEMO noted there were some 3,178MW of new wind and 1,515MW of solar projects in the pipeline, although it is not clear that this includes all of the 600MW of solar projects unveiled by Liberty OneSteel, or its battery and pumped hydro storage.

While contemplating these new additions, the AEMO did not sound the alarm bells, or suggest that this development should be stopped.

It did point to the need to find different sources of synchronous generation – saying it was no longer appropriate to rely on traditional thermal generation for non energy services such as voltage control, frequency control, inertia, and system strength.

This could either be sourced from technologies such as wind, solar and storage, or from other sources such as demand response and synchronous condensers. It noted rooftop solar and energy efficiency was likely to cause residential demand to fall by 2 per cent a year, despite population growth.

AEMO noted that the risk of “unserved energy” in South Australia this year – the subject of so much political posturing – is forecast to reduce substantially from 2018–19.

This is because peak demand will be moderated by increasing rooftop PV uptake and energy efficiency, and the addition of more large-scale renewable generation.

“Renewable generation can help meet peak demand, even without significant firm capacity (which can supply electricity at specific times), and continued development of renewable generators can lower the risk of USE (unserved energy),” it said.

“However, if this renewable development was to lead to earlier retirement of existing thermal generation, the risk of USE would increase without additional firm capacity.

Worryingly, it suggested the biggest risk was from the lack of availability of large thermal units, and it noted that 240MW of gas and diesel generation has been made unavailable since AEMO’s main forecasting report released in September.”

“The balance of supply and demand in Victoria and South Australia is sufficiently tight that the extended unavailability of any further capacity, delays in connection of renewable generation, or failures in generator fuel supplies over the peak summer months would likely lead to further supply shortfalls, well above the reliability standard.”

Battery storage will also play an interesting role. South Australia has the Tesla big battery under construction – and due to be in operation in three weeks – as well as two other grid-scale batteries at Wattle Point wind farm, and proposed for Whyalla.

Homes and businesses are also expected to install solar, although AEMO forecasts varied considerably from a slow take up of 120MWh by 2026 to a fast take up of 600MWh.

Bizarrely, the estimates did not include the retrofit market. Apparently the modeller it uses, Jacobs, doesn’t think that battery storage will be attractive to households already with solar.

Given that South Australia grid prices are extremely high and even the local grid operator considers that the combination of solar and storage will be around 15c/kWh – half the cost of the grid within a few years – this appears an heroic assumption, or just plain wrong.

This article first appeared on RenewEconomy on 6 November 2017