Infrastructure Australia’s latest infrastructure priority list has been criticised for being “too Sydney-centric” and for giving Melbourne’s East West Link, cancelled in 2014, “high priority” status. The cancelled Roe 8project in Perth was removed from the list.

So how does a project get onto Infrastructure Australia’s list? This requires submission of a full business case, which then needs to be “positively assessed” to be given priority status.

But our research, yet to be published, has found these business cases leave out highly significant costs. This article looks at three prominent projects – the WestConnex and East-West Link motorways in Sydney and Melbourne respectively, and Cross River Rail in Brisbane – to illustrate how business cases submitted to Infrastructure Australia do not follow its requirements in key respects. This casts serious doubt on the business cases used to justify major motorway projects, as well as on how priority projects are selected.

What do business cases assess?

Ensuring business cases are completed before investment decisions are finalised is critical to “good planning”. Part of Infrastructure Australia’s remit is to head off concerns that projects are committed to before business cases are fully evaluated. This can help minimise “optimism bias” and ensure investments deliver community benefit.

But we must also examine what the business case is actually showing us. The main part of each business case is the cost-benefit analysis. This compares the money value of project benefits and project costs. Economically viable projects should have a benefit-to-cost ratio above 1:1.

Infrastructure Australia requires project business cases to consider non-monetised benefits and costs, including community impacts. These benefits and costs are required to be quantified in some other way, or at least described. The basis used to estimate “external costs” must also be provided.

Social impacts to be covered include equity or the distribution of benefits (which Infrastructure Australia says need to be identified since cost-benefit analysis does not explicitly take these into account), and affected local communities and other individuals/groups. The non-monetised benefit and cost categories listed as relevant are: social impacts, cultural impacts, visual amenity/landscape, biodiversity and heritage impacts.

In support of monetary estimates, proponents must “describe and provide supporting material that demonstrates how land use, population and employment projections are modelled”.

The guidelines stress that the supporting conditions for expected land use impacts will be in place – for instance, necessary infrastructure investment where densification is assumed. Factors that can hinder the realisation of such benefits (such as local opposition to increasing density) must also be included.

This process would seem to produce a rational prioritisation of national infrastructure projects. The problem is that the business cases submitted to Infrastructure Australia do not follow its requirements. 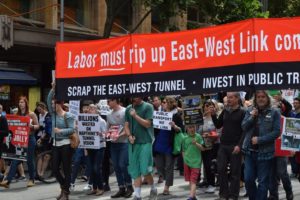 (After the new government cancelled East West Link, the Victorian Auditor-General found the ‘business case did not provide a sound basis for the [previous] government’s decision to commit to the investment’. Courtney Biggs/AAP)\\

To illustrate this, we analysed the business cases of three projects designated as “high priority” for Commonwealth funding:

A key problem in these business cases is that significant project cost items have not been monetised. These include costs relating to environmental effects such as noise and visual amenity and to other impacts on businesses, households and property values.

For example, none of the three cases includes a valuation of the costs of lost business and disruption to household travel and amenity during construction. (This is a big issue with Sydney’s southeast light rail project.)

There is also no costing of the loss of property values along motorways, especially around exhaust emission vents. The East West Link and Cross River Rail business cases make some allowance for this by including the value of general changes in amenity from noise, urban landscape and visual amenity. None of these are costed in the WestConnex case.

Another significant omission relates to the costing of land use impacts. The WestConnex and East West Link business cases both forecast more, and longer, road trips across the network as a result of the projects.

The WestConnex scheme will increase vehicle kilometres by 600,000 per day and make outer suburbs more accessible relative to the inner city. The potential extra costs from greater sprawl are high, estimated at A$4.99 billion for Sydney over 25 years from 2011 if greenfield housing was 50% of new dwellings rather than 30%.

The opposite is the case for Cross River Rail. Increased higher-density development around rail stations would produce infrastructure savings, but the business case does not give these a value.

Furthermore, the valuation of changes in transport mode resulting from each project is inconsistent.

The Cross River Rail business case includes savings resulting from motorists switching from road to rail after the line is built.

The WestConnex project will have the reverse effect, with 45,000 public transport trips per day being switched to the motorway. But the business case does not put a value on the costs of this. These include bus and train revenue losses, or reduced service frequency and increased waiting time to reduce losses. 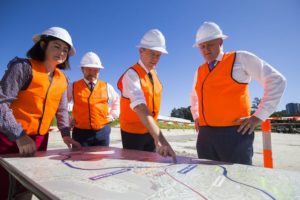 The most contentious business case component is wider economic benefits. These are productivity improvements arising from increased central city job density as a result of the projects improving access.

These benefits needed to be included to lift the East West Link benefit-cost ratio above one. But this is only achieved through sleight of hand – public transport improvements into central Melbourne are included as part of the full project cost. As the public transport component of the business case had low costs compared to its benefits, including these wider economic benefits was enough to push the overall ratio above 1.

Similar benefits are part of the WestConnex cost-benefit analysis. However, these benefits are to be achieved from extra car trips to the centre. This takes no account of the disincentives of road congestion and lack of parking.

Current central Sydney planning controls allow a maximum of one new parking space per 75 square metres of floor area for not-so-tall offices – or one space for about five new workers – and even fewer spaces relative to floor area for higher buildings. This means most increased job density will not come from people driving to work.

By contrast, the wider economic benefits of the Cross River Rail resulting from increased job density in central Brisbane are not valued for inclusion in the cost-benefit analysis.

We need more holistic and integrated analysis of projects. This will take into account not only the “nation-building” aspects – the jobs and growth projects might inspire – but also the disrupting and displacing effects they produce across transport modes, land uses and people’s experiences of the city.

Article first published in The Conversation on the 19th of April, 2018.