Stan Grant’s reflection on the year is an essay We haven’t seen the End of History. We are witnessing its bloody return. He rebuts Francis Fukuyama’s “end of history” notion that western liberal democracy is the endpoint of mankind’s ideological evolution. Grant reminds readers of the conditions leading to the European wars last century “In 1914, the world was enjoying a great peace: economies were booming and trade connected the world. Just like today”.

While Stan Grant warns of the Thucydides Trap – the conflict that arises when a rising power competes with a waning power in a battle for supremacy – Eliot Cohen of Johns Hopkins University, writing in Foreign Affairs,warns of a different risk. That is the risk of America’s failure to lead. Trump’s “America first” isolationism is simply a more blunt and crudely expressed manifestation of a trend that has been developing in America for some years. The generation of American statespeople who engaged with the world and shaped the postwar order has passed away. These were the people who learned from the horrors of the 1914-1945 period that the world’s and America’s interests in standing against totalitarianism are aligned.

Can people live together?

On the ABC Religion and Ethics Report, Andrew West interviews Michael Ignatieff, whom he describes as a “career liberal”. They discuss the value and fragility of social institutions that allow people of differing cultures, ethnicities and religions to live side-by-side, and the consequences when these institutions are destroyed or stripped bare. Ignatieff outlines the “everyday virtues” of tolerance, forgiveness, trust, and resilience, covered in his book The Ordinary Virtues. The broadcast was recorded in Budapest, where Ignatieff is Rector of the Central European University, which he described as “one of the last remaining free institutions” in Orbán’s increasingly authoritarian Hungary.

The program was recorded in January last year. In spite of 80,000 people having turned out on the streets to defend the university, Orbán’s government has booted it out of Hungary and it will be re-established in Vienna later this year.

In the postwar era international leadership was about liberalisation in trade and defending political freedoms. Now it’s also about stewardship of the global commons. Trump Imperils the Planet is the title of the New York Times editorial of 26 December, referring to Trump’s winding back of Obama-era regulations that were designed to reduce the nation’s and the world’s greenhouse gas emissions. (Australia gets a dishonourable mention in the editorial.)

As does Australia’s Energy Minister

The Coalition’s idiocy on climate change is not confined to Parliament. The ABC’s Casey Briggs reports that at the COAG meeting of energy ministers just before Christmas Angus Taylor overrode the agenda set by states and territories, and refused even to discuss emission reductions. He even managed to incur the public displeasure of his party colleague, NSW Energy Minister Don Harwin who publicly accused the Commonwealth of being “out of touch”.

While others try to save the planet

On a more optimistic note, writing in The Guardian Simon Holmes à Court points out that state governments and corporations, fed up with the Commonwealth, are going it alone on making a transition to clean energy. Victoria, for example, has increased its renewable energy target to 50 per cent by 2030 and has written contracts for six large solar and wind projects. The graph below, derived from data held by the Australian Energy Market Operator, shows the least-cost outcome for electricity generation in the absence of policy intervention. 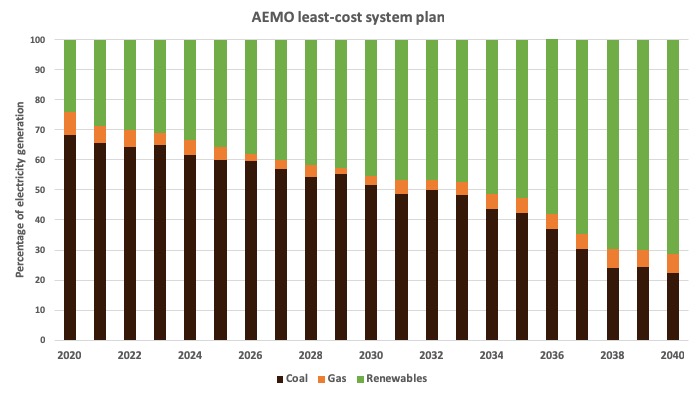 Last Tuesday Jair Bolsonaro was sworn in as Brazil’s new President. Writing in the Washington Post  Marina Lopespoints to his ideological alignment with Donald Trump. His foreign policy to-do list includes “moving the country’s embassy in Israel to Jerusalem, pulling out of the Paris climate accords and continuing the political battle with Venezuela’s leftist president”.

In a separate article she reports that his first move has been to pass responsibility for management of the Amazon region to the Agriculture Ministry. The country’s rural lobby has sought access to these lands for logging and farming, which up to now have been protected in the interests of their traditional owners and for environmental conservation.

Who’s who in Moscow and Washington

Between May and December 2018 Matt Bevan of the ABC put together 31 episodes of about 25 minutes each of a series Russia, if You’re Listening. It’s a series of backgrounds on the actors who have made their brief appearances on Trump’s stage: Michael Cohen, Paul Manafort, Jeff Sessions, Michael Flynn, Felix Sater, Roger Stone and many others. He covers their relationships with Trump, their relationships with Putin, their deeds, and who knew what when. In large part the message is that the law is slowly encircling a criminal enterprise that has taken over the White House. It’s also about the difficulty of removing Trump from office.

Linda Mottram has assembled a panel of in-house journalists in  a 25 minute special Will the Canberra chaos continue in 2019?, produced just a day before Dutton’s petulant attack on Malcolm Turnbull. Mottram’s program is a useful memory jogger, but it reflects an ABC obsession with “balance”, and tends to see the source of chaos in terms of a “general disenchantment with politics”, rather than the specific rightward drift of the Liberal Party that started with John Howard’s party leadership in 1995.

John Hewson, writing in Fairfax media, has an article Australia, as designed in the 1890s, is past its use-by date. It’s less far-reaching than its grand title suggests. Rather it’s a call for reform of fiscal responsibilities between the states and the Commonwealth – with a well-justified swipe at Howard along the way.

Perhaps the most comprehensive political coverage of 2018 is from First Dog on the Moon.