Humanity had a chance to avoid the class war now raging.  It might have come from The Harvard War that was fought and lost in the early 1930s. Hardly noticed at the time, it gets no mention today, yet it had the most profound impact on our civilization of any since the ructions in Judea of yon.

It sounds melodramatic but it’s true. The defeat sustained by Western civilization wasn’t—and still isn’t—recognised as a death knell, and a tragic one.  It was, and still is, embarrassing to talk about spiritual matters, the core of our conscious being.  The current social class war is, I submit, the result of the loss of the Harvard War.  It involved a Faustian transaction in which humanity sold its soul. To explain today’s malaise in society without emphasis on the rout at Harvard is to miss the essence of it.  Ignorance of the subject in Postmodernist academe is due to the difficulty hard-nosed Western man has in dealing with matters of the spirit.  He’s lost the poetic gift.  He suffers from a shonky education and CWS (chronic withered soul syndrome).

The Harvard war took place in the corridors of the Sociology Department set up by a profound Russian thinker, Pitirim Sorokin, a leading 20th century sociologist and social theorist. His basic message: “The organism of Western society and culture seems to be undergoing one of the deepest and most significant crises of its life.  The crisis is far greater than the ordinary; its depth is unfathomable, its end not yet in sight, and the whole of Western society is involved in it.  It is the crisis of a Sensate culture (materialistic; reliant on the human senses rather than intuition – Ed), now in its overripe stage, the culture that has dominated the Western world during the last five centuries.  (…)

“It is also the crisis of contractual (capitalistic) society associated with it. In this sense we are experiencing one of the sharpest turns in the historical road. Not a single compartment of our culture, or of the mind of contemporary man, shows itself to be free from the unmistakable symptoms.”  We chose what was easy, not what was right. And, suffering the consequences of that sell-out, we muddle on deeper into existential angst and loss of hope.  The crisis Sorokin described is in its final act in our time.  We’re going to experience traumatic change in the near future, or sink into the new Dark Age Jane Jacobs wrote about. So far, the latter seems the most likely. And it’s unfolding in a state of generalized ignorance about what’s actually happening.  Unless our leaders tell us what’s at stake in our lives, we’re likely to remain ignorant. In a nutshell, Capitalism is going the way of Communism, only with far more destructive consequences. Both models were defective because inauthentic, therefore destined to disintegrate. The GFC of 2008 sounded the death knell of our capitalistic system when we responded by pumping in more oxygen, ignoring the causes, knowing it was giving it more gas to augment the final explosion.

According to Sorokin, there are two fundamental cultural patterns: materialistic (Sensate) and spiritual (Ideational).  Societies tend to alternate between the two. Times of transition from one orientation to another are characterized by many wars and crises and social injustice of the type growing worse in our time. What’s being painfully replaced is the conviction that only the material world is real; that there is no other reality or source of values. Paradoxically, it’s science, not religion, now telling us that our material concept of reality is an empty illusion.  Things really exist at an invisible energy (spirit) level, including ourselves. They discovered this over a hundred years ago but we were too busy banging the fertilizer out of each other to notice and do something about it.

In 1901, quantum physicists discovered that we’re no more real materially than the Lone Ranger images flowing through the tube of an old HMV television set.  Sorokin expounded his view that we balance our material existence with matters spiritual or we go under.  That was the choice we bungled. Talcott Parsons, an arch-materialist colleague of Sorokin’s in the faculty created by Sorokin, led the charge against him and his message.  Parsons validated the money-runs-everything society we inherited from that period, spawning the likes of Milton Friedman and Thatcherism (what we in Oz know as economic rationalism). Talcott Parsons, with an inferior mind (read soul) and social theory, won the battle and the war by numbers, and the rest is history—proving yet again that the lowest common denominator is what rules human affairs and guides human destiny.

No man or woman gutted in spirit can have a genuine understanding and appreciation—or love—of the value of human society.  (Make no mistake: it’s about love, which we consider corny).  Yet the management of society is now in the hands of such loveless people.  Gutted of spirit, the only measure or standard available to them is the dictates of Mammon and the baser instincts.  The pertinence of this battle of the minds to the present world-wide class war lies in the fact that Australia at its best—under Curtin and Chifley—benefitted from a balance of matters material and spiritual. In the 1960s, if you suggested you play sport just for the money you’d have been thought mentally retarded.  Today, if you think the reverse you’d be considered deranged. Everything today is underpinned by copious layers of spin spewing from pulpits, schoolrooms, media outlets and legislatures.

It’s thanks largely to Talcott Parsons of Harvard and Milton Friedman of Chicago that this senseless and radical undermining of sound human values could be achieved in the short space of five decades of a hyper-destructive century. Sorokin’s table below shows three thousand years of variation in the nature of our cultural periods.  The next phase in the cycles is for an integral cultural type akin to the highest period known to us—the High Middle Ages and early Renaissance.  The change will be prolonged and traumatic, but it means humanity won’t have destroyed itself in pure folly, as so many now fear. 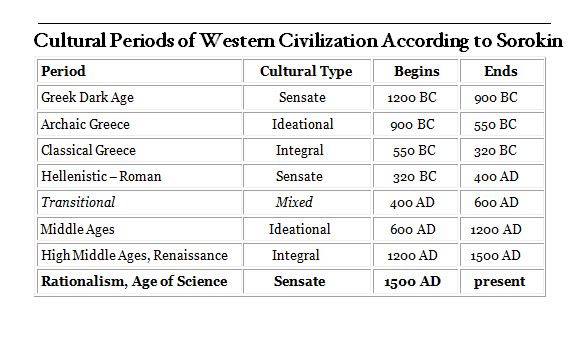 Greg Hamilton is a former architect and academic, now a novelist, social critic and advocate for a new Australian Constitution for a genuinely independent Australia.