Scott Morrison has recently confronted important truths about leadership – your credibility as a leader has to be earned and it is very easy to lose it. Just being confirmed in the position as a leader does not necessarily make that person a leader.

Much has been written about leadership, and one scholar even suggested that said that it is one of the most observed and least understood phenomena on earth. There are a few basic lessons for those who do lead and those who aspire to do so. First, credibility underpins leadership behaviours. It is an important and basic currency – you must be honest, have high integrity, and be with people when it counts.

Secondly, leaders ‘add value’. Trusting the professionals and well-trained volunteers to do their jobs is of course important. So how does the leader ‘add value’ when they are not actually ‘holding the fire hose’? Effective leaders challenge the process, inspire a shared vision, model the way, enable others to act, and encourage the heart. To be truly transformational, leaders need to display inspirational motivation, idealised influence, intellectual stimulation and individualised consideration. While fire management might well be a State responsibility, the National Government can add value through overall planning, co-ordination and asset management: providing proactive strategic direction is required rather than reactive damage control. Why then did Morrison not respond in April 2019 to the former fire chiefs who were warning that Australia was ill-prepared for the escalating climate threat?

Thirdly, authentic leadership is required and it cannot be faked. Authentic leadership combines three perspectives: an intrapersonal perspective (inner self-knowledge), an interpersonal perspective (relational skills) and a developmental perspective (it can be nurtured over time). Apart from self-awareness and relational transparency, authentic leaders display what has been called ‘balanced processing’, being able to analyse information accurately and explore other people’s opinions – that is, being able to ‘read’ your audience. People didn’t want to shake Morrison’s hand, or welcome him to their fire-ravaged communities. He should have recognised that. Also, he did go on an Hawaiian holiday when the country was already in flames. His position as PM surely required his meaningful response; his personal presence was problematic given his immediate history on the issue.

You cannot read people if you are too busy mouthing the same old mantra, ‘I understand’. Angry victims and exhausted volunteer fire-fighters feel that he doesn’t understand. Merely saying that you understand doesn’t make it true or convince people that you do. Words are not enough. This is reminiscent of Republican senators in the USA who support the gun lobby and then say after every school massacre: ‘our thoughts and prayers are with you’. Rather, people expect action, real action. Therefore, as Andrew Constance, the Bega MP and NSW Transport Minister has suggested, ‘open up the cheque book’. Indeed, the deployment of the army and navy is welcome but this still appears to be a unilateral reaction – not part of a national strategic master plan.

Aussies have long been suspicious of authority. It is one of our endearing characteristics. But we recognise it when we see it. Australians and Kiwis rarely need to be inspired – honesty will do. The PM across the ditch, Jacinta Ardern, shows great leadership: Morrison could well take lessons from her about authentic compassion when it counts.

Finally, scholars have identified servant leadership where followers are put first, they experience emotional healing, growth and as a result, value is created for the community. Morrison’s recent advertisement extolling all the good things the Government was doing is not essential public information or serving our best interests. Inviting readers in the ad to donate to his political party rather than to any bush-fire relief fund was unashamedly self-serving: small wonder it was removed rather swiftly. One can only speculate – who is actually advising the PM? Any wonder various commentators in recent days have noted that our PM seems to regard the fires as a political disaster for him rather than a national disaster for us.

Morrison’s personal challenge in his position as Prime Minister is the challenge all leaders must face – how to be credible, how to add value and how to step up and be authentic when the need becomes real.

Greg Latemore is an Industry Fellow at two Australian Universities and lectures in strategy and people management. He submitted his PhD thesis in December 2019 in the field of human resource management. 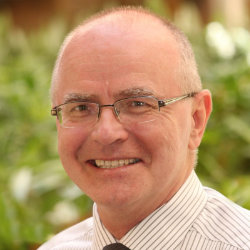