GREG McCARTHY. Searching for a humane response to the coronavirus. (EAF16.2.2020)

The coronavirus (COVID-19) has served to magnify political, economic and cultural tensions within and between Australia and China.

This is a consequence of fear. But beyond the anxiety, the new virus is a challenge for humanity rather than a catalyst to race-based politics. 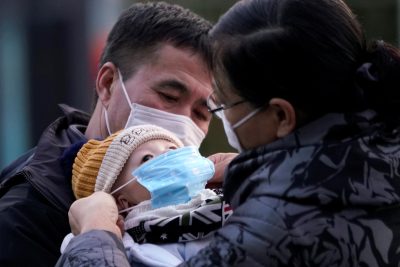 In China, the virus has amplified tensions between the Chinese Communist Party (CCP) leadership and the people. Chinese social media has exposed official attempts to cover up the early outbreak of the virus and uncovered punishment of doctors, notably Li Wenliang, who courageously spoke out about the growing emergency.

The dispatch of Premier Li Keqiang to Wuhan can be read as an attempt by the CCP leadership to rebuild trust and show that the Party is in control. The CCP leadership sought to reassert authority by invoking a state of emergency based on biotechnical and medical advice. This extraordinary measure signifies an endeavour to show concern for the health of the entire Chinese population.

As trust in the authorities waivers, China’s netizens have questioned the official coronavirus infection and death reports — unofficial statistics released by TenCent record numbers far greater than official data. Widespread fear across China has also led to a return to forms of Cultural Revolution divisions turning neighbour against neighbour.

In Australia, the Morrison government took some time to act but when it did, its actions were decisive and blunt. The government enacted a state of exception based on medical grounds on 1 February 2020. This action raised the Department of Foreign Affair and Trade’s travel advice for mainland China to level 4 — ‘do not travel’. On the recommendation of the Australian Health Protection Principal Committee and the Communicable Diseases Network Australia, Prime Minister Morrison applied further travel restrictions to people entering Australia, prohibiting foreign nationals — excluding permanent residents of Australia — from entering Australia for 14 days after leaving mainland China and then extended to 22 February and reviewed weekly.

Australian citizens, permanent residents and their immediate family can enter Australia, as well as airline crews who have been using appropriate personal protective equipment. The application came into effect overnight meaning that Chinese students arriving on 2 February became unfortunate victims of the blanket ban.

The government’s use of the medical emergency to send Australian citizens and permanent residents to the Christmas Island detention centre and then to the outskirts of Darwin for 14 days has been criticised as inhumane and out of line with the World Health Organization’s recommendations against blanket travel bans.

The adverse effects of the coronavirus on the Chinese economy are not yet clear. It is likely to be severe as many manufacturers remained closed and 14 major economic regions extended the Lunar holidays and there are now instructions to work from home. The central bank is pumping hundreds of billions of yuan into the economy to stabilise the financial situation — an indication of a sharp slowdown. There are at least 60 million workers under lockdown conditions and both Beijing and Shanghai are under closed management.

The higher education industry and a range of universities highly dependent on Chinese students will suffer the most should the ban extend through a semester or more. It is estimated that the immediate loss could be up to AU$8 billion (US$5.4 billion). The tourism industry is already reeling from the bushfires and is in for further hard times should the travel ban remain in place for a prolonged period.

Fear of the coronavirus has provoked anti-Chinese racist attacks globally. This xenophobia is also evident in Australia. While most of the media have attempted to report on the virus in a balanced manner, some haven’t. A French newspaper ran a headline declaring the virus a ‘New Yellow Peril’, Germany’s Der Spiegel ran with a title ‘Made in China‘, while Australia’s Herald Sun referred to the pandemic as ‘Chinese virus pandamonium [sic]’.

Of deeper concern are the mounting first-hand reports that Chinese Australians are facing increased hostility both online and in-person since the coronavirus outbreak began. The existing racial tension experienced by Chinese Australia has been magnified by fears of the virus. There is a genuine concern that the government — which did not respond to the Chinese community’s requests to address anti-China sentiment in 2019 — will not tackle xenophobia as a whole of society issue but rather regards it as concerning only Chinese-Australians. Canadian Prime Minister Justin Trudeau, in contrast, publicly warned against the rise of discrimination of this kind in Canada.

The coronavirus could be a catalyst to bring forth the best in Australians. Medical researchers, doctors dealing with suspected virus patients, aircrew from Wuhan and university leaders have been seeking to overcome the fear that pinpoints Chinese people rather than the virus as scapegoats. To develop empathy for the victims of the virus in China and elsewhere political differences need to be put aside. The disease is a challenge for humanity, not a clash of civilisations.

Greg McCarthy is an Honorary Research Fellow at the School of Social Sciences, University of Western Australia, and previously BHP Billiton Chair Professor of Australian Studies at Peking University.