Gunboat diplomacy: Joined at the hip to the war-addicted US 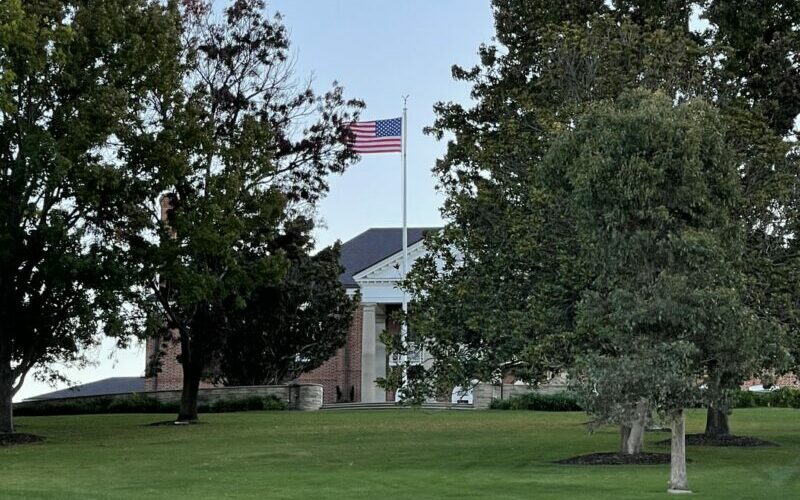 US Embassy in Canberra. (Image: Unsplash)

After 40 years of successful diplomacy with China, Australia has hitched itself to a permanently warlike, self-seeking United States. How on earth did it come to this?

The power of massive military annihilation dies not rest solely with America of course. But its martial dominance — based on an unequalled Bombs and Bullets Budget (BBB) — is unmistakable. Its current annual, primary military spending of US$778 billion is higher than the combined budgets of the next 11 countries combined, including the four other permanent members of the UN Security Council, Britain, China, France and Russia. It has been this way for many decades.

A crucial segment within this intimidating military profile is the submarine fleet of the US Navy. Given the topicality of combat submarines in current Australian political debate, it is useful to consider what this underwater American armada can do. And what Australia’s own new, American submarines may, one day, need to do.

The US manufactured the first ever combat submarine, the USS Turtle, in 1775. It was not successful — but it showed what may be possible. Almost 250 years later, the US has a fleet of around 70 nuclear powered submarines (the US no longer retains any conventionally powered submarines). About 50 are classified as fast attack submarines (the type Australia is now set to acquire) designed to sink enemy ships and submarines.

Four submarines are equipped to carry around 150 modern guided missiles, each, to wage war on sea and land-based targets (used in the 1991 Iraq War and regularly since, for example). This is, as it happens, a huge number of such missiles per vessel.

These exceedingly costly aerial torpedoes, which fly at exceptionally high speed through the atmosphere, under their own power, can be equipped with a nuclear warhead but they are commonly fitted with a very powerful conventional warhead.

The US currently has 14 SSBN submarines fitted with nuclear missiles. Each can carry 24 submarine launched ballistic missiles (SLBMs). Ballistic missiles, unlike cruise missiles, first fly very high above the earth and then drop, gravitationally, back to earth under precision guidance. They travel at extremely high speed and can cover well over 10,000 kilometres.

As a consequence of arms limitation treaties, four is the number normally loaded on each SLBM and the number of operational launch tubes in each SSBN submarine has been reduced to 20 from 24. Each warhead can be accurately aimed to within a zone of 90 metres, it is said, while the individual warheads can simultaneously be sent to completely different locations.

Chinese overflights signal to US rather than threat to Taiwan

That warhead had a yield of about 15 kilotons. Thus, each, single US Trident warhead today has about 31 times the explosive yield of that first atomic bomb.

We can get a robustly indicative sense of the total annihilation power of this American SSBN fleet by multiplying the 100,000, Hiroshima bomb estimate of directly caused fatalities by that 30,000 figure. The result is 3 billion. Thus, just these 12 operational US SSBN submarines, cruising silently and continually in the world’s oceans, carry enough firepower to wipe out around over 30 per cent of the total population of the planet, in an hour or so.

The SSBN submarines are only one leg of the nuclear force triad of the US.

The others are: land launched nuclear missiles and strategic aircraft with nuclear bombs and missiles (think Dr Strangelove). The US still retains a supply of aircraft delivered bombs the largest of which possesses around 100 times the explosive power of the Hiroshima bomb. It also has over 400 land-based intercontinental ballistic missiles (ICBMs).

Moreover, the UK has a fleet of four nuclear powered submarines, which also carry (lower yield) SLBMs. As close allies, there is a level of operational coordination between the US and UK, SSBN submarine fleets.

It should be noted, at this point, that the US has long reserved the right to launch a first strike nuclear attack. President Barack Obama, at the end of his second term, reportedly considered reviewing this fixed, aggressive posture, but nothing came of any such review.

When China first acquired nuclear weapons in 1964, Beijing declared that “it would not be the first to use nuclear weapons at any time or under any circumstances”. We now know from revealed records that the US military leaders twice considered using nuclear weapons against China: during the Korean War in the early 1950s; and later in that decade in relation to military conflict in the Taiwan Strait.

Delivery of these immensely complex, nuclear powered submarines to the Royal Australian Navy may occur within 20–30 years, if all goes according to plan.

As Mike Scrafton recently observed, Australia has, however, demonstrated significant competence in converting conventional submarine building into a gold-plated, over-cost shambles. And it is good to bear in mind the then-defence minister’s candid observation in 2014 that you could not trust the Australian Submarine Corporation to build a canoe.

The US had lost both the huge Clark Air Base and Subic Bay military facilities in the Philippines by 1992. Thirty years later, Australia may be set to help remedy this loss.

The new submarines are just a part of a set of profoundly enhanced military links.

The ABC observed in a recent report that, under the new AUKUS defence pact, still more American troops and military manpower will be relocated to Australia, along with new warplanes (including bombers) with the basing of US Navy vessels in Australia also in prospect. All of this, according to the ABC report, is to enable the establishment of a substantial, enduring, all-round US military presence in Australia.

Meanwhile, some 40 years of excellent Australian trade diplomacy between Canberra and Beijing, which has driven record-setting growth in the Australian economy for decades, has been conspicuously ravaged by the witless, provocative diplomacy kicked off by Canberra around 2018.

The undermining of this immensely successful Sino-Australian economic relationship is plainly a geopolitical plus for Washington. Over the past several years, Washington has been pushing buttons in Canberra to ramp up Australian Sinophobia — they knew the right buttons and only light pushing was needed.

Meanwhile, American exporters to China have regularly stepped in to fill Australian shoes. This, presumably, is considered to be a “win-win” outcome in Washington.

In 2018, John Menadue wrote that the US “is addicted to permanent war”. Former prime minister Malcom Fraser wrote of our “dangerous strategic dependence” on the US in an impassioned book written in 2014. Tom Engelhardt recently argued that America cannot even pretend to do with enemies. Former US president Jimmy Carter told the world in 2019 that the US is “the most warlike nation in the history of the world”.

One, however — Tony Abbott — took himself to Taipei recently to stir the Sino-provocation pot, with customary zeal.

On the other hand, a typically penetrating, unhedged assessment of the recent down-under kow-tow in Washington has been provided by Paul Keating:

“Any prime minister or foreign minister that shops Australia’s prerogatives and interests to a foreign power will be feted by that power. And that is precisely what Scott Morrison and Marise Payne experienced. The US submarine decision was … about donating eight submarines paid for by us to the command of the United States, as an integral part of its Pacific fleet.”

Remarkable. Even Belarus would surely not pay for a new nuclear submarine fleet for the Russian navy.

Engelhardt claims that, following the fall of Kabul, the US is “pivoting from a war on terror to provoking China … which all adds up to an enemy-filled future.”

Former Australian prime minister Kevin Rudd, meanwhile, pointed to the “slippery slope” dangers related to the naval interoperability aspects within the new agreement. If the US were to go to war against China, Australia is now likely locked in to becoming an active belligerent in any such war.

John Copper recently wrote that Taiwan only had a single (very powerful and self-focussed) military ally. It appears that number may have doubled since he made that observation.

This, then, is the fractious, recently humiliated, permanently warlike, self-seeking superpower, possessed of world-beating, concealed, first-strike extermination power, to which Australia is now more firmly joined at the hip than ever. And this is so, regardless of when the AUKUS pact nuclear submarines may be delivered. How on earth did it come to this?

Here is my theory.

Some months ago, the phone rang at The Lodge in Canberra.

Scott Morrison picked up the phone and a senior American-accented voice asked, “Can I speak to the prime minister?”. Morrison identified himself, quivering a little in anticipation, and the caller said: ”Um, Scott, it’s Joe Biden calling from the White House. Scott, my friend, how would you like to buy a dollar for 60 cents? We have the deal of the century open only to you Down Under folks, to buy a fleet of superb nuclear subs. What do you say?”

The quivering anticipation turned to quivering excitement and the deal was done.

Most (but, alas, not all) know that each and every dollar-for-60-cents comes bonded to a conspicuous list of severe demands which you cannot refuse. See above.