“Since the announcement of the Trump-Netanyahu ‘plan’, the Israeli government has announced plans to construct nearly fifteen thousand new illegal settlement units and other buildings in Beit Safafa (Givat Hamatos), Jabal Abu Ghuneim (Har Homa), and the Qalandia airport area (Atarot). These announcements specifically target areas in and around occupied Jerusalem. They effectively and practically encircle the occupied capital and carve it out of the Occupied Palestinian Territory while dividing the rest of the West Bank into two separate parts. These are premeditated and clear steps that deal a final and decisive blow to the practicability of the two-state formula and leave no room for doubt about Israel’s agenda for permanent occupation.

With the active participation and support of the current US administration, Israel is unilaterally and illegally annexing Palestinian territory and trampling on the Palestinian people’s most basic rights. These announcements are the practical translation of an extremist, ideologically-driven, and dangerous rightwing agenda that trounces Palestinian human rights and threatens to unravel the international order in favor of unilateralism, exceptionalism, and political bullying.

More practically, these willful actions render all international statements about commitment to the two-state solution meaningless, including the most recent watered-down statements by the UN Security Council and the European Union.

It is time to recognize the painful truth. The international community’s response to these systematic abuses has been simply shameful. By issuing hollow statements of verbal opposition while refusing to hold Israel accountable, the international community has bought Israel additional time to commit yet more crimes to subvert the global order and to totally smash any remaining faint chance of peace. By their own reticence and timidity, the international actors have enabled and emboldened Israel, rather than reined in its rogue actions. They have allowed this conflict to fester and devolve into a ticking time bomb.

Many governments that claim to champion international law have chosen to cower away from the Trump administration’s bullying and have refrained from confronting the blank check its plan gave the right wing in Israel to devour historic Palestine and decimate Palestinian rights. Instead, they resorted to asking the Palestinian people to be ‘creative’ and ‘positive’ and to show ‘flexibility’; even tasking us with the impossible mission of coming up with an ‘alternative plan’ while they continue to undermine the international order, ignore the Israeli sledgehammer, and protect Israeli impunity.

It is time to call out this hypocrisy and double standard, which is unraveling the foundations of international law and universal human rights and turning the internationally-endorsed two-state solution into Orwellian Newspeak.”

Hanan Daoud Mikhael Ashrawi is a Palestinian leader, legislator, activist, and scholar who served as a member of the Leadership Committee and as an official spokesperson of the Palestinian delegation to the Middle East peace process beginning with the Madrid Peace Conference of 1991. 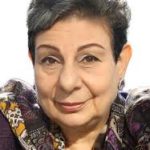 Hanan Daoud Mikhael Ashrawi is a Palestinian leader, legislator, activist, and scholar who served as a member of the Leadership Committee.