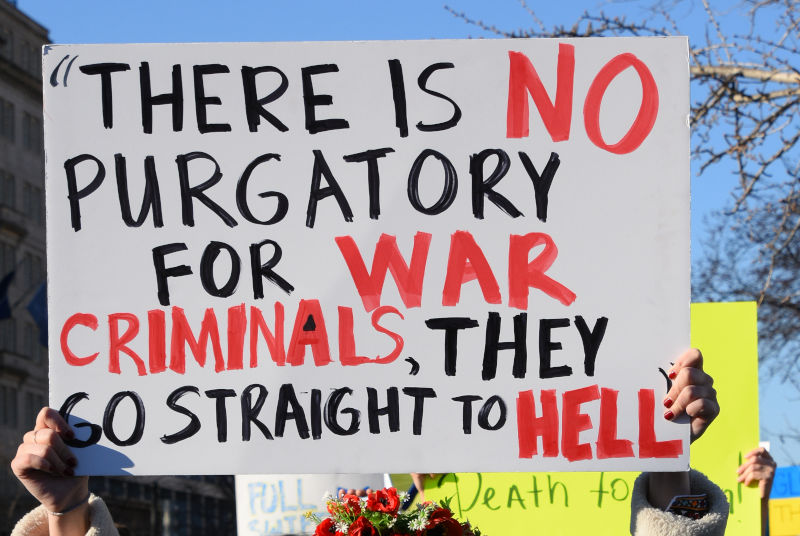 War criminals must be held accountable. But this rule of law is universal. And it is precisely those who emphasise the rules-based international order that should strictly adhere to these rules themselves.

At present, historical analogies are very often used to explain reasons for or against the causes of the war in Ukraine or to describe the horrors of this war with historical arguments. Some of these comparisons are downright perfidious, like equating Adolf Hitler and Vladimir Putin. Other analogies are far-fetched, such as President Putin’s narrative of a “genocide” in eastern Ukraine, or they serve propaganda purposes, such as Putin’s statements about the “fascist and neo-Nazi leadership in Kyiv” and the need for denazification. Other historical comparisons may be understandable because of the outrage over this brutal war, but can be out of place, such as President Volodimir Zelensky’s Holocaust analogy in his address to members of the Israeli Knesset. This comparison trivialises the horror of the Holocaust.

Historical analogies can provide a framework for orientation. But if arguments are made with historical, moral statements, then they should be applied consistently. The violation of international law by the Russian aggression is rightly denounced, and there is nothing to justify the war crimes currently being committed in the bombed-out and besieged cities of Ukraine. Nevertheless, the current mainstream Western narrative that “all evil” emerges in the Kremlin is a very one-sided view, even if Putin’s approach to the wars in Chechnya and Syria can be seen as the playbook for the Ukraine war. Violation of international law is not only reserved for dictators like Putin. NATO’s war in Kosovo in 1999 and the US-led invasion of Iraq in 2003 were also clear breaches of international law. The reasons emphasised before, during and after these wars cannot be accepted as a credible apology: Genocide was to be prevented in the Balkan wars and in Iraq the existence of weapons of mass destruction was deliberately falsely claimed.

It’s not surprising that President Putin is now using precisely these historical analogies to justify his crimes in Ukraine. It is important and necessary for democratic countries to insist on and emphasise the values of the rule of law, of freedom and human rights. But to simply criticise Putin’s behaviour as a unique and unforgivable breach of international law and to ignore the misdeeds, errors and sins of these democratic societies from the past is not only a sign of hubris. It is also the application of double standards. Who counted the US interferences in South America, long referred to as the “backyard” of the US, in violation of international law? And it’s not just about the past: For two decades, the US has maintained, and still does so, the Guantanamo detention camp in Cuba. Even today, prisoners are still detained there without any acceptable legal procedures. Many of them were tortured to extract confessions about their alleged involvement in terrorism.

Despite all the horrors of this war in Ukraine, it has also produced positive things. For example, the Western willingness to provide assistance for the suffering population of Ukraine. But even here we are experiencing double standards. It is traumatic to see that almost ten million people are fleeing within the Ukraine, about one quarter of the population, or trying to cross the border to the EU, almost four million refugees to date. The engagement of civil society and European governments is touching and admirable. Bureaucratic procedures for the integration of refugees are quickly removed with the stroke of an organisational pen. The refugees do not even have to register during the first three months. People house the refugees in their homes. Travel by public transport is provided free of charge to facilitate the mobility of Ukrainians. Just a few days after arriving in a foreign city, schools are open for Ukrainian children. As citizens of Europe, we can be proud.

But double standards in treating of refuges in EU countries are blatantly evident. What happens to the refugees from Afghanistan, Syria, Ethiopia and Somalia? Their integration into European societies has been systematically prevented for years. So far, the EU has constantly and unsuccessfully been arguing about a coordinated asylum policy. Ironically, the countries now facing a large number of refugees from Ukraine are those that have previously rigorously rejected and torpedoed an EU asylum policy: above all Poland, but also the Baltic countries, Slovenia, Hungary, Austria and Romania. Within a very short time, financial resources have been made available in Brussels to deal with the Ukraine crisis. Before the Ukraine war, EU policy always ended in dispute and at the expense of the refugees. The EU interior ministers haggled over quotas for distribution of refugees in the various countries. And some governments flatly rejected the admission of even a single refugee.

Throughout winter, refugees from the war zones in the Middle East and East Africa, have been stuck between the border of Belarus and Poland. They still live there; no, they have to vegetate there, without any prospects. There is no back or forth for them. While we in Europe are pondering about whether we need to lower the temperature in our homes next winter, in case Russian gas is no longer available, children freeze to death in this border strip. And Europe looks the other way when Poland insurmountably reinforces the border fences. “Fortress Europe”, repelling as many refugees as possible, was the European motto until the outbreak of the Ukraine war.

A similar fate applies to the Greek island of Lesbos, where many refugees have been enduring catastrophic conditions for years without any prospect of change. A recent report in the German daily “Süddeutsche Zeitung” commented on the situation in Greece: “The conditions in the current ‘transitional camp’ on Kara Tepe Beach may not be quite as medieval as in the former Moria camp, which burned down in September 2020. But the food is still inedible, the shower water is still cold, the chemical toilets are dirty, and the rats are so big that the cats take flight.”

For these refugees, the now universally praised “welcome culture” (“Willkommenskultur”, what a nice German word) did not apply. So far, the so-called “pushbacks” of the EU border protection agency FRONTEX remain unpunished. FRONTEX constantly and repeatedly violates international humanitarian law by dragging asylum seekers back to sea in their rubber dinghies, leaving them there to their fate, regardless of the lives of the people in the boats. What is the difference between Afghans, Ethiopians, Eritreans and Syrians on the one hand and Ukrainians on the other? Is it religion? Or is it the colour of the skin? The fact that African and Asian students who fled Ukraine had difficulty crossing the border also points to the ugly face of racism in Europe. There are now first- and second-class refugees in Europe.

Yes, democratic countries can be proud of their values. And the emphasis on humanity, liberty, freedom of the press and human rights is indispensable. But let’s stop applying double standards. Yes, the war criminals must be held accountable. But this rule of law is universal. And it is precisely those who emphasise the rules-based international order that should strictly adhere to these rules themselves.

This article of 5 April 2022 is reproduced with permission from the Toda Peace Institute.