Historically, it’s Japan, not China, that invades other countries 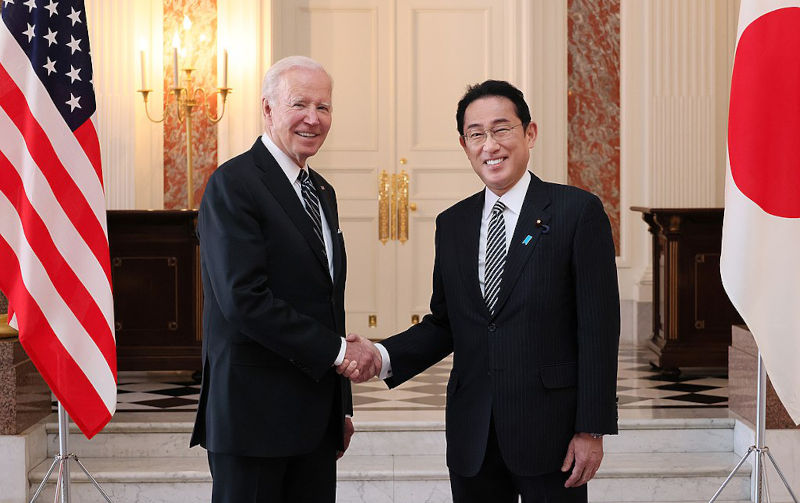 With Japan just having taken over the presidency of the Group of 7 at the beginning of 2023, Prime Minister Fumio Kishida has wound up a six-day visit to Britain, France, Italy, Canada and the United States.

One of his main aims was to gain support for the rearmament of Japan, justifying it on the grounds of threat from China. On 13 January Kishida told his last and most important host, United States President Joe Biden, that he regarded Russia’s invasion of Ukraine as a sign that the world needs defence against an aggressive China. But, actually, history tells us that it’s Japan that’s the aggressive one, not China. What’s more, no country has been the target of Japanese aggression more than China.

As The New York Times (13 January) reported on the Kishida-Biden meeting, the two leaders “vowed Friday to work together to transform Japan into a potent military power to help counterbalance China and to bolster the alliance between the two nations so that it becomes the linchpin for their security interests in Asia.” They are not making much secret of the fact that it’s the rearmament of Japan they are talking about, or that they are specifically aiming their alliance against China. It will be no surprise that China’s Global Times (14 January) had a different take. It thought the US-Japan agreement was “a double-edged sword for Tokyo”, since it would be “the front line of attack” following inevitable tensions triggered by its ties with the United States. What strikes me most about this response is how mild it is.

Let’s look at the historical record. For numerous centuries, China and Japan got on well and peacefully. In the thirteenth century, the Mongols, having conquered China, tried unsuccessfully three times to conquer Japan, while in the sixteenth century Japanese pirates raided the Chinese coast, succeeding in inflicting serious damage on Hangzhou and Ningbo. On the whole, however, mutual dealings were peaceful and civil. Japan accepted, indeed welcomed, several important parts of Chinese civilisation, such as the use of Chinese characters (Kanji), Confucianism as a political philosophy and religious practices such as Buddhism. (The famous Zen Buddhism now so intimately associated with Japan originally came from China as Chan Buddhism.)

It was the modernised Japan of the Meiji Restoration that started aggressive contacts, and let’s note all the aggression came from Japan. China was the invariable sufferer of Japanese aggression, not the other way around.

There are too many aggressive actions to list here. Here are just a few.

In 1894 Japan triggered a war with China over Korea by sinking Chinese ships. The result was a Japanese victory that made Taiwan a Japanese colony and control over Korea extensive enough that Korea became a Japanese colony in 1910. Both remained under total Japanese control until Japan’s defeat at the end of World War II in 1945.

Japan extended control into north-east China, taking it over completely in 1931 and setting up the puppet state of Manchukoku. It then invaded further south, taking over Chiang Kai-shek’s then capital Nanjing in December 1937.

From 13 December, when Japanese troops entered the city, until early 1938, they carried out the ghastly Nanjing massacre, with countless people killed, women raped and property utterly destroyed. Estimates of casualties vary enormously, but the International Military Tribunal for the Far East claimed at least 200,000 murders and 20,000 rape cases.

That was only the beginning. Apart from the Soviet Union, China suffered more than any other country from World War II. Statista puts the number of deaths in China at 19.5 million, 16 million of them civilian, all victims of an aggressive and rapacious Japan.

And during that time, and since then, how many times has China attacked Japan? Not a single time!!

That was then, this is now! Let’s move on! I can see that argument, but I can also quite understand that many Chinese still feel resentful, and very worried and nervous, about a rearmed Japan. There are still people alive who remember the war, or whose parents or grandparents have reminded them about it. And it is still in the history courses in schools. Among the numerous students I have taught over the years in China, I have found anxiety and fear of Japan very widespread.

Japan has apologised in a number of ways. Japanese Emperor Akihito visited China in October 1992. He noted “the great sufferings” that his country “inflicted on the people of China” during the 1930s and 1940s, adding “I deeply deplore this”. But Japanese spokespeople have been generally more fulsome in apologising to South Korea and the United States than to China, and I think Emperor Akihito’s phraseology exemplifies this. There’s no way Chinese are going to forgive and forget while Japan continues to insult China.

And what about Australia? Perhaps we have become so subservient to the United States that we’ll accept anything, but I certainly hope not.

Others have commented on the provocative way the Japanese Ambassador Shingo Yamagami has encouraged his Embassy to be used for anti-China purposes, hosting China’s most notorious enemies in the Australian parliament. I add simply that China was an ally of Australia’s against Japan. Currently, Australia is trying to “stabilise” its relations with China, and it can’t be too pleasing to Foreign Affairs Minister Penny Wong to see Yamagami’s behaviour.

This antagonising and demonising of China has got to stop! China is not a threat to Australia or to any other country, especially Japan. China is not an enemy and should not be treated as such.

In the light of its own history, for Japan to rearm on the grounds of countering an aggressive China is completely outrageous.