Coordinated attacks on the Reserve Bank, free speech for the Courier Mail … but not for citizens, and digging up dirt on Josh Bornstein.

In our absence last week, we missed the latest edition of “obfuscate the story” with regards to gender-based violence.

Aaron Patrick, of The Australian Financial Review, sought to portray the woman-led coverage of as “unapologetic activism”, implying that much of what was published were “opinions” instead of facts. It amounted to a hit-job on news.com.au’s political editor Samantha Maiden. First editions of the article included details of a death in the family.

Despite excoriating responses from much of the rest of the mainstream media, the AFR doubled down, with editor-in-chief Michael Stuchbury defending the article as “reasonable”, and repeating the “angry woman” line, which was sure to lower blood pressures and soothe frustrations across the nation.

Even more unhelpful was The Australian‘s Henry Ergas, who dismissed the events that have sparked outrage as “tantrums”.

But luckily the rest of the media had the solution: more Christianity.

The Australian was particularly forceful, but even The Sydney Morning Herald’s Chris Uhlmann seemed to forget that Australia is a secular, not Christian, society.

Attack on the Reserve Bank

Meanwhile, a co-ordinated attack on the Reserve Bank of Australia began. Philip Lowe, RBA Governor, has said that interest rates won’t rise until unemployment is sufficiently low and wage growth sufficiently high, which might not be until 2024.

The government doesn’t seem to want to wait until then for wages to grow. But in a show of breathtaking hypocrisy, it is arguing against wage rises. How can the economy be strong, justifying the cessation of JobKeeper, yet be too weak for any wage growth?

And in yet another “I don’t hold a hose” moment, the government seems to be relying on the RBA to control house prices, despite that not being a mandate of the central bank. Low interest rates have uncovered the flaws in Coalition housing policy – such as negative gearing, renovation grants and home buying grants – which are seeing house prices skyrocket. 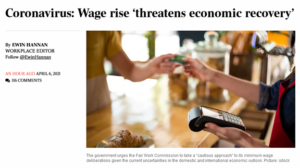 Who needs free speech when you have tabloids? The Courier Mail – the same paper that put Annastacia Palaszczuk in a cross-hair, and described two teenagers as “enemies of the nation” – decided that Australian of the Year Grace Tame shouldn’t be allowed to criticise the Prime Minister. Isn’t that what people are free to do in a democracy?

Following news that high-profile Industrial Relations lawyer Josh Bornstein was tilting for a run in the Senate, The Australian wasted no time in digging up a tweet calling then Labor deputy leader Chris Bowen a “muppet” to grab a news headline.

It took eight whole paragraphs to get to the fact that the tweet was from eight years ago. 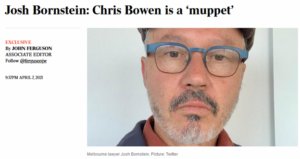 And The Daily Telegraph was hitting the topics of public interest as always: Scott Morrison’s dog.