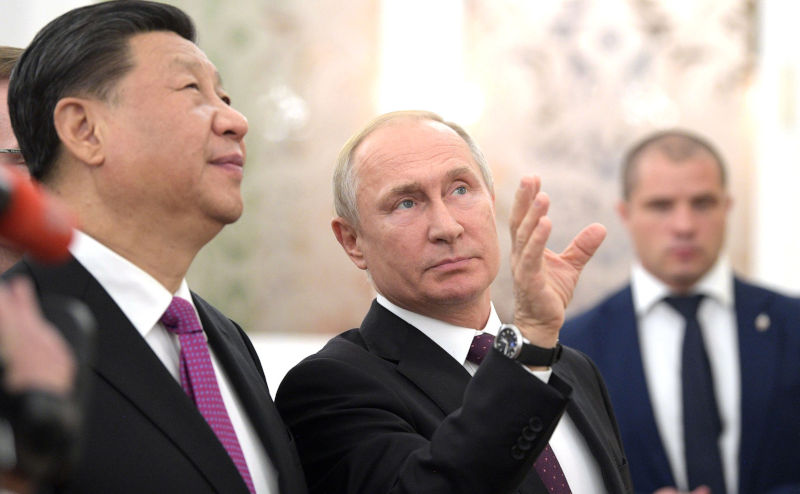 Russia’s war in Ukraine is teaching Beijing what Western-led full-fledged financial warfare in the 21st century is like. Image: Wikimedia Commons

Moscow may have launched a hot war in Ukraine, but the West has declared total financial warfare on Russia. That is a unique learning experience for Beijing, one it will take full advantage of in the years ahead

Russia had always been China’s best friend, even when it was not. I wrote this with a degree of cynicism, but it is not necessarily untrue. There is currently something of a Western consensus, or conventional wisdom, according to which Beijing’s avowed friendship with Putin’s Russia is turning into a headache, a worsening liability rather than a growing asset. All things considered, that’s the West deluding itself on its own war propaganda. It won’t be the first time.

I came to this realisation the other day while scanning Netflix hoping to find something to watch. It’s incredible how many war movies came out of the United States’ “war on terror”. But the coming confrontation between China and the US will probably involve not tough soldiers in uniform, but men in well-tailored suits. This is especially likely as China witnesses and learns from the West’s financial version of a nuclear war on Russia. What about Taiwan, you say? Contrary to Taipei-Washington propaganda, the war in Ukraine makes it less likely and less urgent for the mainland to invade the island.

Just as post-Soviet Russia showed China how not to reform its economy, so Putin’s Russia is demonstrating how not to confront the West. Sometimes your friend teaches you by example; Russia, though, has been teaching by counterexamples. Say what you like about China’s communist rulers. They are, however, not stupid, but rather adept learners.

It’s best not to fight, but if you must, fight intelligently, rather than brutally. If Chinese communist leaders have learned nothing else from two millennia of statecraft, they have learned at least this much. In the past two centuries, China has been terrible at fighting external wars, both against weak foes and strong enemies. Let’s not start again now.

Russia’s war in Ukraine is teaching Beijing what Western-led full-fledged financial warfare in the 21st century is like. This goes well beyond good old-fashioned sanctions. The West has shown itself capable of confiscating a country’s foreign assets outright. The latest round didn’t start with Russia, but with the Taliban when the Joe Biden White House vindictively took – robbed – half the foreign assets belonging to the starving Afghan people and parcelled them out to the American families of victims of the 9/11 terrorist attacks. The US is, of course, skilled in choking off the economies of small countries and their dirt-poor populations; Cuba, Iraq under Saddam Hussein, Iran, Venezuela and now Afghanistan are the obvious examples. What the US is practising now is to weaponise the global economy against far bigger countries such as Russia and China.

Western financial institutions have moved to paralyse the Russian central bank and engineer the rouble’s free fall in value. They have also gone after some of the country’s big banks by denying them access to Swift, the dominant messaging system for international money transfers. Meanwhile, to enforce the effectiveness of its financial weapons, the US has shown awesome abilities to monitor breaches and compliance. This surveillance ability is at least as important as being able to weaponise global finance.

But all these are not cost-free, for the US and its allies. In fact, they will eventually cost a lot – for the world economy!

Financial warfare has already had detrimental effects that are boomeranging back to the countries waging it, as well as the rest of the world. Financial warfare may be less costly than putting boots on the ground in terms of human costs, but it’s an illusion to think the West can prevail over Putin just by financial means. Clausewitz didn’t teach finance is war by other means. The current US-led strategy, despite its celebration by usual vocal suspects of Western media, will end up with Ukraine lying in ruins and Russia achieving at least several of its key war aims.

Meanwhile, for the “global south”, the war in Ukraine has nothing to do with them, yet the West is internationalising it and making them suffer, with food, energy and commodity inflations. These are the same people who have suffered the most during the Covid-19 pandemic, and their own governments know it. To think the entire world is behind them is another grand self-delusion of the West and its dominant news media outlets. People in many parts of the world may be sympathetic to the plight of the Ukrainians, but not when their own children have to suffer from the global economic consequences not of their own making.

China’s policymakers are being offered real-time PhD programmes on:
How the West wages total financial warfare;
How a country like China can withstand, counter and avoid it;
How much and how long the Chinese population may suffer through it and tolerate it;
How much the populations of rich countries are willing to tolerate or suffer the resultant damages of their own financial warfare;
How resentful the rest of the world will become in response to the West’s weaponisation of the global economy, and whether and to what extent US and Western credibility in general will be damaged.

All in all, it will not be a bad war for China, contrary to the assumptions of mainstream Western leaders and pundits.