By far the most important and sobering part of the 2017 Foreign Policy White Paper is Figure 2.4. It offers the Treasury’s estimates of the sizes of the region’s key economies in 2030. They are calculated in purchasing power parity (PPP) terms, which adjusts for differences in prices and exchange rates to give a more accurate picture of the relative weight of different economies. The choice of PPP measures is deliberate: it gives the strategists’ view of GDP. 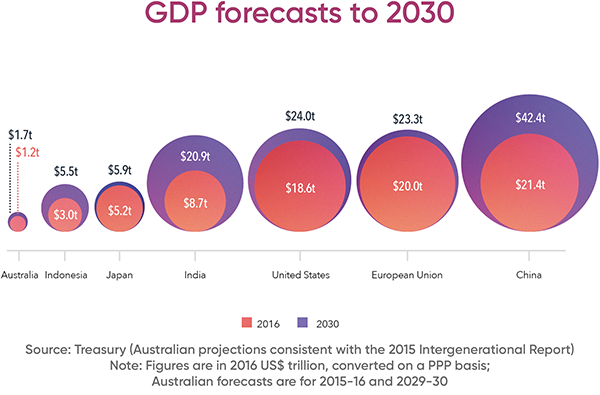 So here are the numbers that really matter. In 2030 the Treasury estimates that China’s GDP will be US$42.4 trillion and America’s US$24 trillion. No, you didn’t misread that. Elsewhere the paper casually mentions that China’s economy is already, today, 18 per cent of global GDP compared with America’s 15 per cent. But it’s the picture painted by Figure 2.4 that gives a real sense of where things are going. Only thirteen years from now, the government is telling us, China’s economy will have left America’s far behind in the rear-view mirror.

This matters, because money is power. The richer a country is, the stronger it is. Of course that oversimplifies things, but not by much. And despite what the white paper tries to suggest in some places, America’s larger historical stock of wealth does not outweigh China’s growing supremacy in annual flow represented by GDP, because the stock is so hard to mobilise for national purposes.

So these GDP numbers give us a good approximation of the emerging distribution of power in Asia, and make clear the magnitude of the task facing those who must shape Australia’s foreign policy over the next decades.

The white paper is quite explicit that Australia’s future security and prosperity depends on the maintenance of the existing rules-based international order in Asia, and that this order in turn depends on American power. It acknowledges quite clearly that China is contesting that order, that American voters are growing less and less sure that they are willing to carry the costs of confronting China’s challenge, and that those costs will only grow as China’s economic lead widens.

Australia’s big challenge therefore, as the white paper sees it, is to keep America committed to the task of containing China. The key solution to this challenge is the concept of the “Indo-Pacific,” which has now completely replaced the old Asia-Pacific to become the officially authorised definition of Australia’s region.

The difference, of course, is India, and Figure 2.4 shows why. It predicts that by 2030 India’s GDP will nearly equal America’s, at US$20.9 trillion. If you add India’s weight to America’s, they together outweigh China. That makes it easier to assume that America will, with India’s support, be able to keep China in check.

But that only works if India really is there to support America against China. To those who define our region as the Indo-Pacific, that seems self-evident. The concept presupposes that India and China are part of the same strategic system, and that they will inevitably be rivals within that system, each trying to dominate the other and avoid being dominated themselves.

But is this true? It is more likely that instead of one Indo-Pacific strategic system we will see two separate systems: one in the Indian Ocean and South Asia, dominated by India; and the other in East Asia and the Western Pacific, dominated by China. Neither of them will have the power to contest the other’s position in their respective spheres of influence except at immense cost, and it is not clear why either would choose to do so. And if India chooses not to contest China’s bid for primacy in East Asia, it is not clear who else could offer America the kind of support it will need to keep Beijing in check.

Again, Figure 2.4 shows why. It predicts that Japan’s GDP in 2030 will be only US$5.9 trillion, and Indonesia’s will be US$5.5 trillion. So together they will barely make up half the gap between America’s and China’s GDP. Adding Australia makes almost no difference: our GDP in 2030 is estimated at only US$1.7 trillion.

The reality, then, is that on the government’s own numbers what the old communists used to call the “correlation of world forces” is strongly against the hope that America can somehow persuade or compel China to live within the rules of the regional order America has set and upheld for so long – when the trillions were on America’s rather than China’s side.

And the white paper offers no concrete ideas about how, if that doesn’t happen, Australia can hold its corner in an Asia where China predominates. This is patently clear in the strange chapter titled “Foundations for Success”. It lists all manner of things which, the government says, will help us achieve our foreign policy objectives. But it fails to address the critical fact that Australia’s relative economic and strategic weight in Asia – and hence our capacity to shape the region – is falling sharply, just as it becomes clearer and clearer that America will no longer be able to shape it for us, as it has done for so long.

But even more revealingly, the “Foundations for Success” chapter fails to mention the essential ingredient for effective diplomacy when weight of power is not on your side: new ideas. It’s a telling omission.

Hugh White is Professor of Strategic Studies at ANU and was the principal author of Australia’s Defence White Paper 2000. This article was first published in Foreign Affairs Update on 24 November 2017

Hugh White is emeritus professor of strategic studies at the Australian National University.