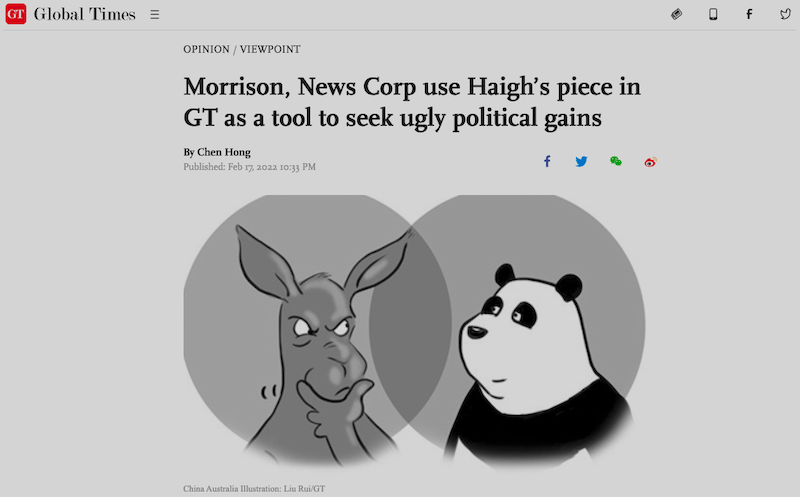 The present and a past head of ASIO have rejected claims that China is the sole country seeking to influence politicians. Now is the time to ask Morrison what is his policy? (Image: globaltimes.cn)

On the 14 February I had an opinion piece published in the, CPC owned Global Times, which looked at the prospect of an improvement in relations between China and Australia.

I gave little hope were Morrison to be returned and only a slightly better prospect were Albanese to become Prime Minister.

I noted that Morrison was a very poor Prime Minister and that in comparison Albanese shone. Commentators on the right turned this comment into an endorsement by the Global Times, and by implication the Chinese Government, of Anthony Albanese. At best it was mischievous. Right Wing  attack dogs had a field day and in so doing demonstrating the paucity of their journalistic skills and the depth of  ignorance of China.

Kevin Rudd took the opportunity to dismiss me as a ‘has been’, no doubt picking up on similar comments I have made about him. It was clear he had not read the article. Rudd’s position on China is confusing.  Perhaps Rudd has been working quietly to build bridges to the Chinese but this is not apparent from his public statements.

Commentary by Right Wing shock jocks demonstrate how little research they have done on China and the extent of their bias. None of this augers well for the future.

One has only to read the papers in the lead up to the Australian involvement in Viet Nam to see that war hysteria is abroad once more in the ranks of the LNP, their advisers and fellow travellers in the media. It is as dangerous as it is puerile.

Morrison hammers away at border security blaming China for everything from Covid to cyber-attacks on vital defence and industry undertakings. He doesn’t mention or perhaps he is unaware of similar operations being undertaken by the Americans from Pine Gap. Australian security is under far greater threat from climate change about which Morrison doesn’t give a toss. It is under threat from the debt he has run up and his indifference to running up further debt.

Australian security is challenged by underfunding of universities and the public education system and by government sponsored greed, which has seen Morrison and his cohorts support the growing gap between rich and poor.

Should Albanese win he is faced with some mammoth tasks and undertakings. He has to find ways of Australia creating wealth away from mining. He must encourage value adding and the training and application of local skills.

The government continues to determine the ground on which the election is to be fought. They have bashed away on Labor’s alleged weakness over China.

The fracas in and out of parliament during the last week over China including around publication of my article in the Global Times gave Labor and Albanese the perfect opportunity to attack Morrison over his bellicose position on China and set out his own position. To claim as he does, that there in no difference between the LNP and Labor over policy toward China is to admit that Labor has no policy toward China. The present and a past head of ASIO have rejected claims that China is the sole country seeking to influence politicians.

Now is the time to ask Morrison what is his policy? Why is Australia out of step with the rest of the world? The US has a better relationship. Does Morrison want to get back to some sort of ‘normal’ relationship? And he should be taken to task when he says it is up to China to mend the fence. Morrison bullies, bully him back. Expose his weaknesses on this issue.

Albanese might have taken the opportunity to state the sort of relationship Labor would like to have with China and how it would go about achieving it. He might sweep aside the LNP stupid talk about protecting Australian security and hammer on about just how much Morrison has weakened it, right down to a fundamentally divided society.

Albanese has to determine what the battles will be and when and where they will be fought. China should be front and centre of that. He should be seeking details on AUKUS and the extent of the US takeover in northern Australia and how that is likely to affect our relations with our neighbours and China.