I grieve for Russia, which is not the same as Putin 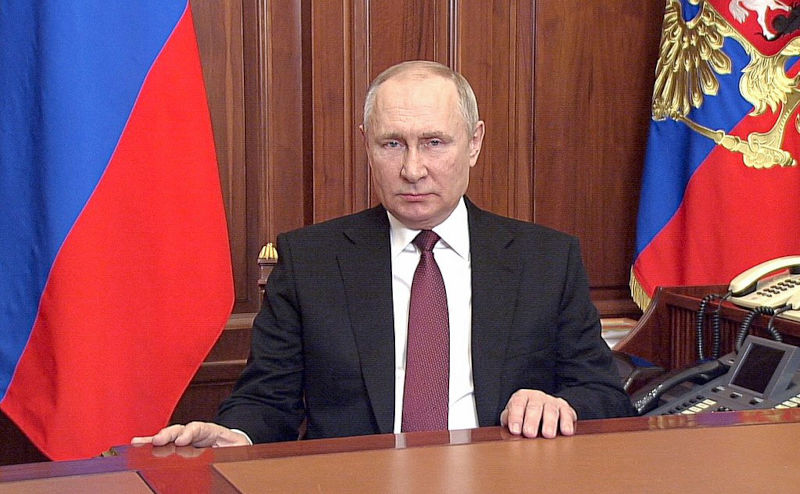 When Putin lost his reason is not clear. Image: Wikimedia Commons

Russia got under my skin early.

My sixth-class social studies assignment was on Soviet Russia. I still have the project book, covered in red paper with a yellow hammer and sickle in the corner. As a teenager I became fascinated by the Cambridge spies, Philby, Burgess and Maclean, intrigued by their ideological commitment. I read Le Carré but also Dostoevsky and Chekhov, had a crush on Omar Sharif as Zhivago. As my musical tastes matured it was Rachmaninov and Prokofiev who made me tingle.

I studied the Russian Revolution at university, then applied for the Department of Foreign Affairs, seeing it as a way I could get to know homo Sovieticus. In 1989, just after the Berlin Wall fell, I arrived in Moscow as First Secretary in the Australian Embassy. The Soviet Union was gone two years later. The West declared victory and demanded commitments from former Soviet republics to human rights and democracy. But these things don’t get started with the stroke of a pen. I thought it would take a generation for them to take hold. It’s proved to be longer, messier and now much, much bloodier.

Like other Russia watchers, I did not think President Putin would invade Ukraine in February 2022. I was incensed by the lack of diplomacy being deployed to cool tensions. The preaching about freedom and democracy had assumed an increasingly hypocritical ring. It was no deterrence.

I knew talk of NATO expansion riled Putin, that he saw Ukraine as part of the Russian sphere. I thought he might increase support to pro-Russian Ukrainians but not resort to all-out war. Now I don’t think he will stop. Unless the international community changes tack, I fear Ukraine is doomed and the prospects of a larger war cannot be ruled out. Putin is the war criminal but the West is complicit in this tragedy.

Early on in his presidency, notably in the aftermath of September 11, Putin wooed the West as a means of reasserting Russia’s place in the world. When his overtures were not fully embraced, he started to look towards China, the Middle East and India as potential partners. He also delved into the past, as far back as ancient Rus, to find inspiration for his national idea. Stalin’s defence of the nation against Nazi Germany became a favourite historical weapon. But that does equate to a plan to restore the Soviet Union, a misnomer that exposes how the Cold War mentality lingers in Western leadership and has stymied opportunities to bring Russia back from the brink.

Now the country is a pariah led by a madman. When Putin lost his reason is not clear; the speculation is that COVID isolation was the last straw. What has always been clear is his vision for a new Russia. Putin’s Millennium Manifesto was posted to the Internet just a day or so before Yeltsin appointed him his successor on New Year’s Eve 1999: Russia has reached its limit for political and socio-economic upheavals, cataclysms and radical reforms. Only fanatics or political forces which are absolutely apathetic and indifferent to Russia and its people can make calls to a new revolution…

Russia is completing the first, transition stage of economic and political reforms. Despite problems and mistakes, it has entered the highway by which the whole of humanity is travelling. Only this way offers the possibility of dynamic economic growth and higher living standards, as the world experience convincingly shows. There is no alternative to it.

Russia was and will remain a great power. It is preconditioned by the inseparable characteristics of its geopolitical, economic and cultural existence…But Russian mentality should be expanded by new ideas. In the present world the might of a country as a great power is manifested more in its ability to be the leader in creating and using advanced technologies, ensuring a high level of people’s well-being, reliably protecting its security and upholding its national interests in the international arena than military strength…

Putin was upfront: his Russia would not become a carbon copy of the West and would retain a strong state. It would be ‘an organic unification of universal general humanitarian values with traditional Russian values’. Not the partner Western governments had wished for but they could have done much more to cooperate with this Russia-in-transition.

Up until the last couple of years, I had still been hopeful about Russia. Watching from afar, I had followed the transformation of Moscow into a vibrant megatropolis. Granted, outside the capital many Russians still live in poverty and beyond the reach of the outside world – making it easier now for Putin to sell his crazed ‘special operation’. It had seemed possible Russia could emerge as sophisticated country that relied less on its natural resources and more on its human talent.

Under the radar, people from around the world had been collaborating on ambitious, inspiring projects. Take Zaryadye Park, thirteen hectares of green space right next to the Kremlin, built where the hideously out-of-place Rossiya Hotel had stood from the 1960s until it was imploded in 2006. A consortium led by the American firm Diller + Scofidio + Renfro (DSR), whose guiding principle is ‘wild urbanism’, won the competition to design the park in 2012.

Moscow’s chief architect Sergei Kuznetsov described being involved in the project (voted by Time Magazine in 2018 as one of the world’s greatest places): … in the time of [the] Eastern Ukraine crisis [2014] and something serious like Cold War fissures in the world, this type of collaboration between American and Russian architects here in front of the Kremlin was a great example of a possible way to collaborate and to have a dialogue. I’m proud of this.

Charles Renfro too was positive about the project: It’s a testament to how much the world is still working normally, and cooperatively and experimentally together.

No more. And here I grieve also for my former profession, which is all about dialogue. Diplomacy has gone missing in this crisis, replaced by belligerent rhetoric and propaganda. I mourn not only the victims but also the impoverished leadership in London, Washington and NATO. In Australia, the shallow coverage of the war is misleading ordinary citizens and prompting cheap, reactive gestures from politicians. To make sense of this horror, we must have more than a daily feed of harrowing images of Ukrainian grandmothers and bombed-out apartments. We need rigorous analysis and, as we head to the polls, deserve scrutiny of decisions to send arms to Ukraine. We need to understand the costs of war and not be lulled into thinking we are helping the innocent by providing tanks.

Once, Australia would have used its international reputation and middle-power status to try to bring warring parties to the negotiating table. That is getting harder and harder to achieve in this conflict. Until it happens, there will be no victory for anyone just more deaths, more destroyed cities, much more misery.