Here’s a little help in understanding that magic figure – the “R” value.

Speaking of the way the Covid-19 pandemic spreads and is brought under control, WHO Director-General Tedros Adhanom said “The way down is much slower than the way up”.

An illustration of his point is provided by Italy’s experience, shown in the graph below. The way up is steep and fast, the way down is slow. 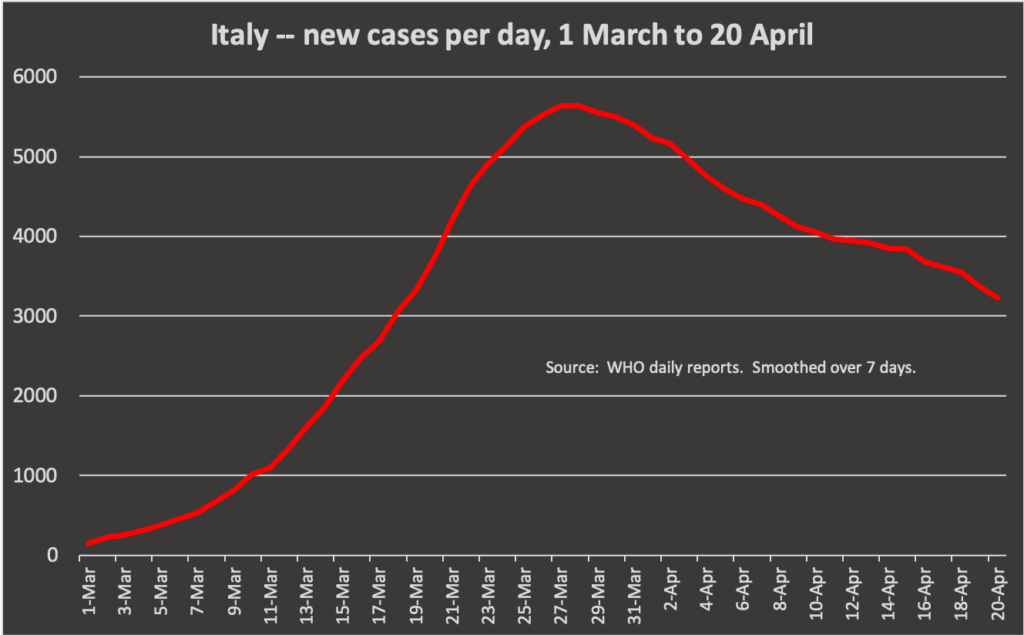 By now we’re probably aware of the way the virus spreads so rapidly – it’s an example of very rapid compound growth. But even though we probably learned about compounding at school, and even though governments encourage us to think of the benefits of long-term investment in superannuation, compound growth often takes us by surprise.

Perhaps you have come across the water-lily quiz, which poses the following question:

On Sunday morning a gardener notices that a water-lily is growing on a pond, and it presently covers an eighth of the surface. It’s a species that doubles its coverage every day.  On what day will it cover the whole pond?

OK – the answer is Wednesday, and because you’re already thinking about compounding, and because you know that behavioural economists ask trick questions, you probably got it right. But when people in the street are confronted with the question, most people get it wrong, and it’s a fair bet that in the early days of the spread of Covid-19, most politicians were too complacent because they didn’t apply their brain to compounding. (Many conservative politicians believe that their innate wisdom liberates them from the need to use anything so revolutionary as simple mathematics.)

When prompted by the above test we remember what we learned about compound growth. We’re probably less familiar with the phenomenon of compound decline, but that’s roughly what’s been happening in Italy since late March, and in other countries getting on top of the virus.

Both the rise and decline in the spread of the virus are captured in what is called the virus reproduction factor, R, and we hear from epidemiologists and public health officials the importance of getting R below 1.0.  Various studies suggest that if it is unchecked, R for Covid-19 is about 2.6, which means on average each person with the virus infects between two and three others.

A broad understanding of how R works helps us understand Tedros Adhanom’s description, Italy’s experience, and our government’s call for patience, as we see our daily incidence of new cases fall away.

I’m no epidemiologist, and I know that their models, while built of simple elements, are reasonably complex. So in order to avoid stepping into that complexity, I have decided to illustrate R by an analogy somewhat removed from the present Covid-19 crisis. My chosen analogy is religious conversion.

Imagine a religion with an initial 100 adherents, all enthusiastic about spreading the word.  If each devotee can convert two others, and impart in the converts the same zeal, we have the same arithmetic as with the water-lily, although the time lag is much slower. As we see it double in every period (however long it takes to make a conversion) we can observe that that religion has an R value of 2.0.

The religious movement “The United Society of Believers in Christ’s Second Appearing”, better known as the Shakers, provides a case in point. At its peak in the mid-19th century it had around 5000 adherents, but it is now confined to a handful of people in a village in Maine. What kept their R number down was a belief in the virtue of celibacy – not a great survival strategy.  Even Saint Paul, a killjoy when it came to sex, realised that if Christianity was to have an R value greater than one Christians had to breed.

So far in this discussion I have glossed over time periods. The water-lily R plays out over one day. Leaving aside the extraordinary success of Billy Graham, religious conversion probably takes some months. And according to public health officials, someone infected with Covid-19 takes up to two weeks to infect others. We could imagine that it takes a week for each person with the virus to infect 2.6 others, for the sake of a rough estimate.

To allow people to get a feel for how R works, I have set up a simple Excel spreadsheet, which you can download from this link.

Below is a picture of what you will see when you open it.  There are two cells you can change – the starting number of faithful and the R value.* I have provided two graphs, showing the same series but with different scales, because a low R value hardly shows up on the top graph, while a high R value rapidly disappears from the lower graph. 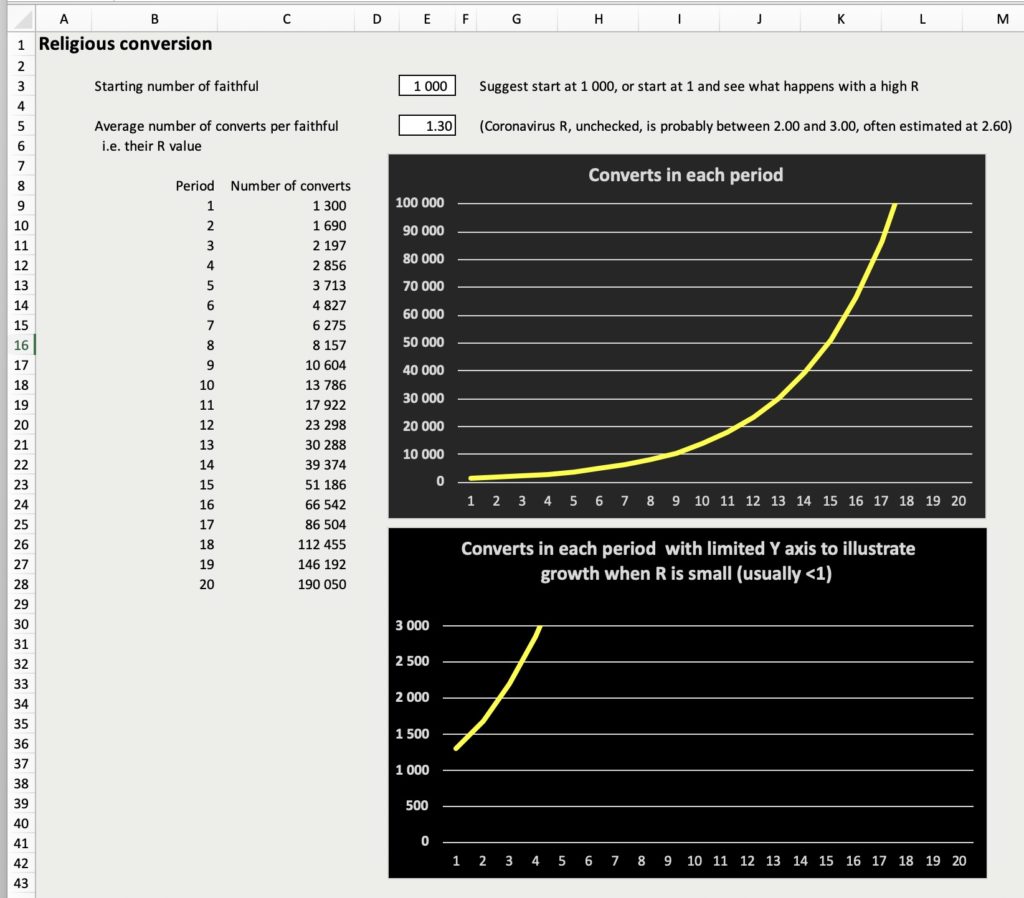 If you want some idea of what this means for the virus in Australia – and I stress that this is a rough model – here are some values you could plug in:

Starting number 2000, R = 2.60:  This would be more or less what would happen if we had no restrictions, and the 2000 or so Australians who are still suffering the virus were out infecting others. By Week 10 the whole population of 25 million would be infected.

Starting number 2000, R = 0.90: The new case load would fall, but as time progresses that rate of fall gets frustratingly weaker. This roughly simulates the idea of holding R just below one, in the (false) belief that going any harder would cause too much economic pain.

Starting number 2000, R = 0.50: This is what seems to have been happening in Victoria, South Australia and Western Australia, where R has been estimated at about 0.50.  The beast is gone in a few weeks – but tight controls must be maintained over those weeks and further time must be given for last cases to clear. Lifting restrictions too early sends R back up to 2 or 3.

Starting number 1, R = 2.60: This was the situation in the USA on January 20, when the country had one recorded case, and Trump said “we have it totally under control” and did nothing. Had Americans sustained Trump’s complacency, 20 weeks later, by about June, 200 million Americans would be infected, and a week later the entire 330 million would be infected. There would be at least 3 million dead (low estimate) and more probably 30 million dead (high estimate based on countries with overloaded health systems). That’s not to count the catastrophic consequences of a possible complete society collapse.

* The worksheet is protected but it doesn’t have a password – you can “unprotect” it if you want to change its structure or build a more sophisticated model. Mathematical purists may note that I’m using difference equations to model what is really an exponential process, but the disparity is minor.

Ian McAuley is a former lecturer in public sector finance at the University of Canberra.