IAN MCAULEY.  Dutton knew what he was doing when he booted out Turnbull

The first sign was in the round of by-elections in July last year, when Labor held Braddon and improved in Longman. On Saturday big swings cost them both of these impoverished  electorates. Their mood in July was against Turnbull, but those same voters have enthusiastically embraced Morrison.

The by-election upsets led to the Dutton-Morrison putsch. Dutton knew that the LNP’s supporters wouldn’t vote for Turnbull. Turnbull might have been positioned to win a general election, but it would have been on traditional Labor-Liberal lines, and he would have lost support among Queensland’s LNP. Dutton himself lost the bid to rule the party, but he got his acolyte into the job, and in a successful re-run of the 1987 “Joh for Canberra” bid, the Liberal Party has effectively been taken over by the Queensland LNP. So much for Menzies’ “broad church”.

The two graphs below, based on the count as at Sunday morning, tell much of the story.  The swing to the Coalition was mainly among the disadvantaged, while in seats with high incomes and a high level of education, there was a swing to Labor. 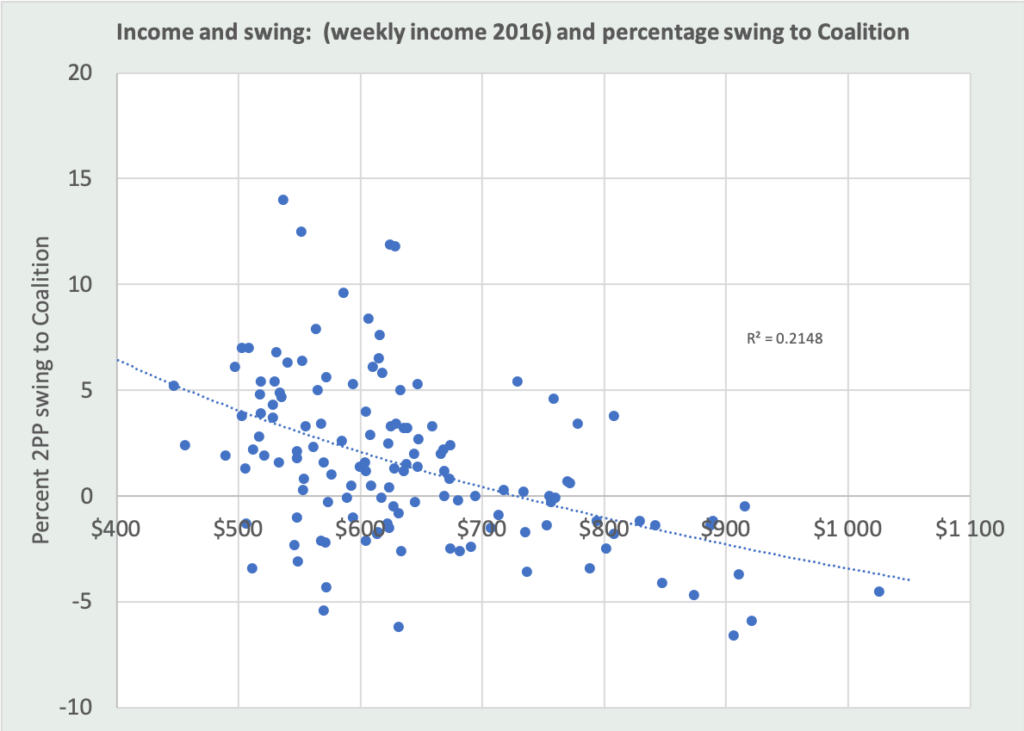 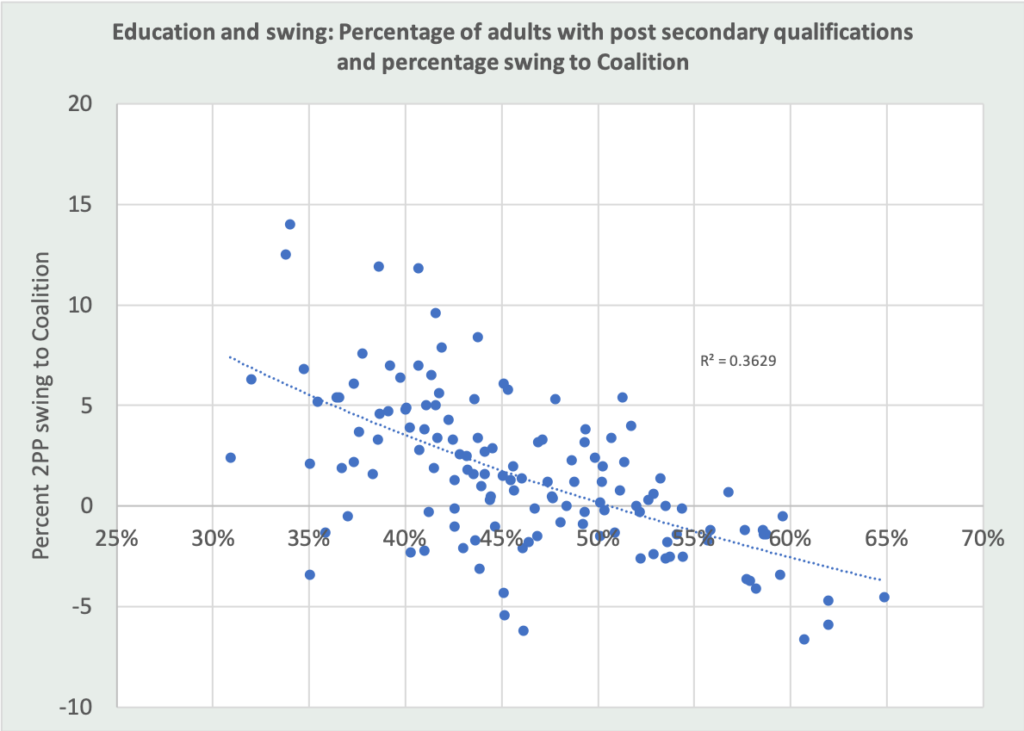 A simple, but wrong, explanation is that there has been a revolt of the “tradies”, but most well-employed and educationally-qualified tradespeople would be earning well above $800 a week, which is where the line drops below the axis.

Dutton and Morrison have captured the vote of the most disadvantaged – people who are never going to get to the point of worrying about franking credits or the capital gains on their five investment properties. These are the very people who stood to gain from Labor’s policies.

They have been duped.

It was a clever campaign, by two men skilled in the deceptive arts of advertising. In an unholy deal Clive Palmer provided the money while Scott Morrison provided the spiel – a spiel so laden with spite and falsehood that it made Tony Abbott look like a child of the Enlightenment.

The gravity of the situation is that we have just elected a government that has no intention of addressing our structural weaknesses: inattention to climate change (both our international obligations and the need to deal with local consequences), wealth and income inequality, unsustainable household debt, a set of financial incentives that encourage wealth extraction rather than wealth creation, a narrow export base, declining education standards, underfunded government services, and inadequate infrastructure. Far from addressing these weaknesses, every indication is that Dutton, Morrison and their supporters will aggravate them.

Dutton and Morrison have raised expectations among people who are anxious, insecure and who feel that the “elites” (Turnbull, the Labor Party) have been looking down on them. What these supporters face, however, is disillusionment.

Their arrogance, their hubris, their contempt for our democratic institutions, and their sheer economic incompetence, will almost certainly lead Dutton and Morrison to unwise decisions. This at a time when the economic headwinds are already blowing.

Having gone even further than Howard in purging moderates and liberals from the Coalition’s ranks, Dutton and Morrison have re-defined the Liberal Party, to occupy the space occupied by America’s Republicans and Germany’s Alternativ für Deutschland. It’s a space that’s unwelcoming to those men and women, guided by reason, evidence and a moral purpose, who seek public office to serve their country rather than to protect the privileges of those who plunder our common wealth.