Neither the politicians nor the media are helping the electorate to understand the issues around corporate taxation. Lowering the corporate tax rate for large companies would do hardly anything for Australian investors, but corporate executives, board members and foreign investors would certainly stand to benefit.

The government’s argument for lower corporate tax rates is based on the false claim that our corporate taxes are among the world’s highest.

But in fact for domestic investors our corporate tax rate is very low, and the proposed reductions would have little effect on Australians who own shares personally or through superannuation funds. The government’s proposals are mainly about attracting foreign investment and tending to the interests of corporate boards and executives.

The government has already rammed through the Senate a corporate tax cut, from 30 per cent to 25 percent, for companies with a turnover up to $50 million, and is now trying to extend it to larger companies, which would include most large public companies.

To predict the consequences of such changes it is necessary to see how Australia’s system of dividend imputation operates. The following description of how corporate taxes apply may help.

We can imagine a company making a $100 pre-tax profit (or $100 million – the model scales up). It may decide to allocate that profit between $60 to be paid as dividends, and $40 to be retained for re-investment, also known as “retained earnings”. (This 60:40 split is close to the 61:39 average for Australia’s public companies, but the arithmetic is clearer if I use a 60:40 split.)

The diagram below shows what happens before and after tax. After tax is taken out at 30 per cent, $42 is left for the investor, and $28 is left as retained earnings. That’s shown in the line “allocation after tax”. 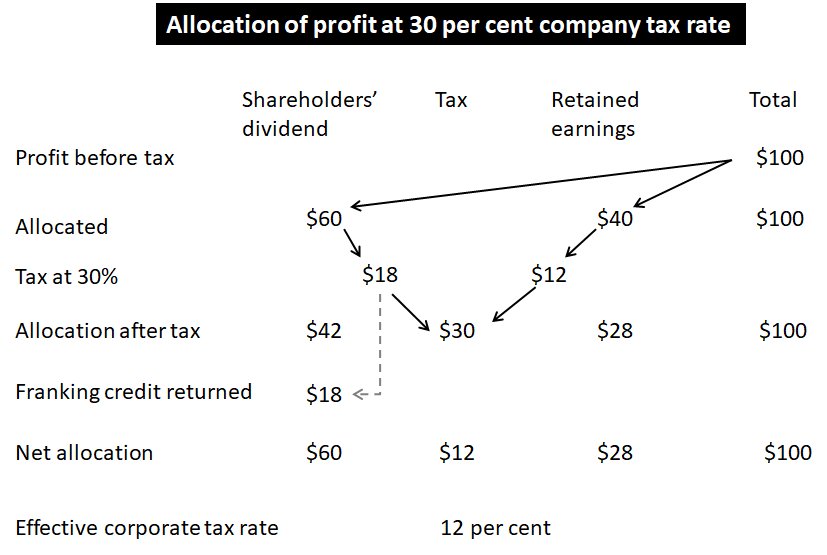 Taking the model further, under Australia’s dividend imputation system, introduced by the Hawke-Keating Government, the shareholder receives a tax credit – a “franking credit” – for the company tax already paid. It comes to the shareholder either as a cash refund or credit when the shareholder’s tax return is lodged.

Therefore the net position is as shown in the last two lines: the shareholder receives $42 as a cash dividend from the company, and then the $18 originally collected as tax is returned by the Tax Office in the form of a “franking credit”. In other words the dividend is untaxed at the corporate level, but for the recipient (an individual, a superannuation fund etc) the $60 dividend is taxed at normal marginal rates. The only part of the company’s $100 profit that is taxed is the $40 retained earnings, from which $12 is taken as tax.

This means that the effective tax rate is 12 per cent.

Thus, while Australia has a high headline rate of taxation, its effective rate is much lower than in other countries where dividends are effectively taxed twice – once at the corporate level and once in the hands of the investor. The government’s opportunistic use of headline rates for comparison of our rates with other countries is a shameful deception: it would be valid only for a company making a profit and retaining all its earnings.

We can model this same situation but with a corporate tax rate of 25 percent, as the government proposes. The second diagram shows the changed figures in red. 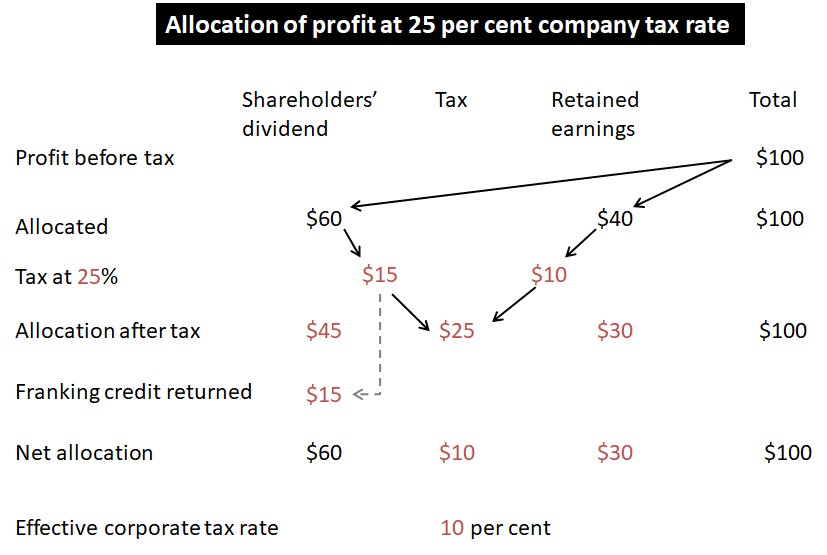 The shareholder initially gets a higher dividend but receives a lower tax credit, and finishes up no worse off or better off.  The only benefit to the shareholder is that of the $100 profit, an extra $2 ($30 – $28) has been retained for re-investment, which may allow for some capital appreciation, but the effect is trivial. Morrison has conveniently neglected to tell investors that any increase in cash dividends would be completely offset by lower franking credits.

The effect for Australian shareholders is that the effective corporate tax rate has been reduced from 12 per cent – already very low by world standards – to 10 per cent which is even lower by world standards. (My comparison of rates in other countries is in a New Matilda article).

That’s why government ministers are misleading electors when they make extravagant claims about the benefits for shareholders, including those with superannuation investments.

It’s also why Shorten was off the mark when he suggested that Turnbull would profit from a corporate tax cut.

Turnbull and Shorten are both relying on people’s ignorance about dividend imputation, and unfortunately the media are not challenging them when they make false claims about bigger superannuation returns or benefits for the Prime Minister. In this regard, while we’re now used to the Murdoch media parroting the Coalition line, it’s unfortunate that neither the ABC nor the Fairfax media are explaining the situation or challenging ministers when they make misleading comparisons based on headline rates.

What then is all the fuss about?

So why is the so-called “business community” making such a fuss about such a minor issue?

The answer lies largely in the increase in retained earnings – from $28 to $30 in the example above. That’s a substantial seven per cent rise. Retained earnings are ostensibly for re-investment to maintain the real value of an enterprise, and even perhaps to let it grow. But it’s also the source of income to pay executive salaries and board fees.

Only someone naive about the workings of capitalism would believe that “business lobbies” stand up for the interests of shareholders – the owners of corporations. Subscription fees to the business lobbies are paid by corporations, not by their shareholders. Their constituencies those who stand to benefit from higher retained earnings in the form of executive salaries and board fees.

There is a case for encouraging firms to retain earnings because it’s a low-cost way for firms to fund expansion (much lower-cost than going to the market for funds). A counter-argument, however, is that it’s better to return funds to shareholders so that they can re-allocate funds to better prospects.

The other point is that imputation is of benefit only to Australian shareholders. Foreign investors – at least those few who aren’t shifting their profits to offshore havens – are liable for the full 30 percent tax. A cut to 25 percent would be an obvious benefit to foreign shareholders.

The government’s proposals have to be seen in the context of seeking foreign equity investment. Whether a corporate tax cut would achieve that objective is one question: evidence suggests that out of all the factors that may persuade or dissuade people to invest in another country the rate of tax is a minor issue. And it would be a windfall to those foreigners who already have equity investments in Australia.

The broader question concerns the reasons for seeking foreign equity investment. There is something strange about a country whose citizens are pouring their savings money into low-quality assets, including land and housing speculation, while its government is encouraging foreigners to take over the most promising growth assets. We are running a very high deficit on current account, which has to be balanced by foreign capital inflows. It’s questionable whether we can continue to expect foreign investors to support our lifestyle.

When the Hawke-Keating Government introduced dividend imputation in 1987 and cut corporate tax rates it presented reasoned arguments to the electorate. But in its established patronising manner, the Turnbull-Morrison Government is relying on a misleading campaign to push through tax changes that would be costly to public revenue, would privilege already highly-privileged business executives and directors, and would add to our country’s already high foreign liabilities.

If it believes it has a case for corporate tax cuts the government should present it to the electorate, and not use a deceptive presentation of headline rates.