Private health insurers are losing their most profitable members, younger people whose contributions subsidise older members. Rather than forcing young people back into private insurance, the government should break private hospitals’ dependence on private insurance and let private insurance go the way of other high-cost industries.

The media and the PHI lobby consistently understate the taxpayer subsidy to PHI. It is not $6b per annum. It is $11b pa

Anyone following financial markets may wonder what the problem is. Medibank Private’s profit – $630 million – is up 15 per cent on the previous year. Privatisation has been kind to its shareholders and executives. NIB has done even better, with a 25 percent rise in profit.

But the industry is begging for yet more support, because its membership is slipping. Hospital coverage peaked in 2014 at 47.3 per cent of the  population; by June this year it had fallen to 46.1 per cent. Of even more concern to the industry is the changing nature of its membership: over the year to December 2016 it lost 58 000 contributors aged under 55, while gaining 77 000 older contributors. Up to around age 55, on average, members contribute more than they claim, while past that age contributions don’t keep up with claims. 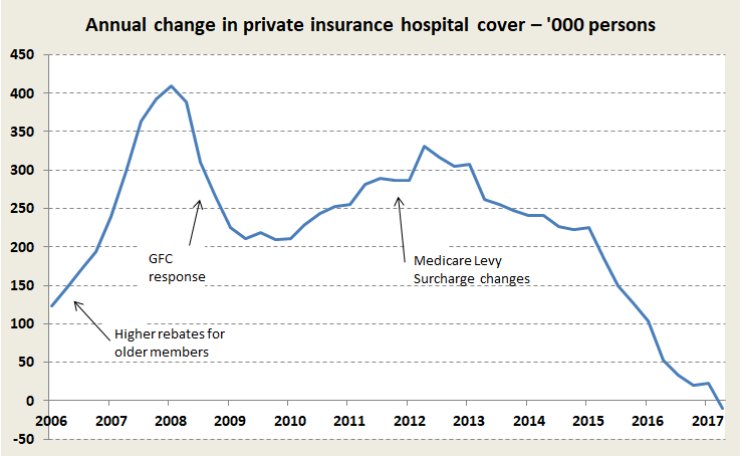 Young people were originally enticed into PHI by a measure known as “lifetime health cover” which sees premiums rising by two percent each year if people don’t take out private insurance when they turn 30. (Hint to younger readers – unless you have a chronic condition for which you will need care beyond what is offered by Medicare, or unless you really want to subsidise the old, PHI isn’t worth it, even with the bait of “lifetime health cover”.)

There are many explanations for PHI losing its appeal. Many people, having had PHI for a long time, find it’s poor value for money: they may have been hit with large and unexpected out-of-pocket payments after making a claim; they may have had an accident or an acute condition and been surprised to find they were well-cared for in a public hospital; or they may have added up what they have been paying in PHI and worked out that they would have been better off putting the money aside to pay for their own care in a private hospital.

In the 17 years since the Howard Government re-introduced subsidies for PHI, the cost of insurance has risen much faster than inflation: in real (inflation-adjusted) terms, since 2000 premiums have risen by an average of 59 per cent. In the last couple of years, with real household incomes flattening or falling, PHI has become an obvious item for the chop as people review their discretionary spending. (An analysis of consumer issues in PHI is in a paper I delivered last year to the Health Insurance Summit.)

Would it matter if PHI were to go the way of other Australian industries that have disappeared or dramatically shrunken – clothing, footwear, film processing, typewriter manufacturing? After all, it’s simply a financial intermediary, taking $3.3 billion a year (about $500 per policy) in overheads and profits.

The usual defence of PHI is that if it were to collapse, the “private system” would also collapse, putting an intolerable stress on the “public system”. The usual argument trotted out is that PHI, through diverting patients away from public hospitals, helps keep waiting lists in check.

Second, and more important, there is no reason private hospitals have to depend on PHI. Over the years there have been several proposals to break this nexus. Just in 2015 the authors of the Commonwealth’s Reform of Federation Discussion Paper suggested that private hospitals and public hospitals be placed on the same funding basis. That is, they should be funded on what is known as a “casemix basis”, with set fees for each procedure, bypassing health insurers.

Understandably the private hospitals and the well-paid specialists who work in them want to see their cosy arrangement sustained. They don’t want to be subject to the harsh financial discipline faced by the public hospitals. Nor do the insurers.

Just last month Private Healthcare Australia – a lobby not for health care as it name suggests but for private insurers – commissioned a study purporting to show that the government’s subsidies for PHI are good value for money. It’s a hard case to mount, because a single government insurer such as Medicare, with its much lower administrative costs and capacity to control service providers’ prices and usage, is a far more cost-efficient way to fund health care than relying on a fragmented PHI industry. (For an explanation of the economics of private vs public health insurance, see a paper published by the Centre for Policy Development in 2012.)

But by making some heroic assumptions and a few omissions Private Healthcare managed to make a superficially attractive case. The main omission was a huge under-estimation of the cost of subsidising PHI. Those who have an interest in underestimating that cost usually quote only the direct budgetary outlay – an estimated $6.43 billion this financial year. On top of that, however is another  $1.58 billion in taxation revenue forgone because the PHI rebate is tax-free, and another $2.65 billion, by a conservative estimate, of the revenue forgone by exempting those with high incomes and who hold PHI from paying the Medicare Levy Surcharge. The cost of the budgetary assistance to PHI this year is therefore around $10.64 billion. Private Healthcare has made their justification by taking into account only the direct budgetary outlay, or 60 per cent of the cost of subsidising the industry.

Minister Hunt clearly knows what’s driving PHI’s costs – its high bureaucratic overheads, the demands of corporate shareholders for profits, and above all insurers’ incapacity to control providers’ charges. As he says on prostheses – particularly relevant to PHI because of private hospitals’ tendency to specialise in hip and knee surgery – “There is an unacceptable divide between the cost of the same device for a public patient and the same device for a private patient.”  But that lack of cost control is not confined to prostheses. It’s what happens when a fragmented set of insurers confront well-organised service providers.

And in case we’re in any doubt about how he will go about that, he has said that he wants to “make private health more attractive to young people”.

As Ross Gittins reminds us, young people already bear the burdens of higher education debt, unaffordable housing, and a superannuation system that takes their money and gives it to bankers and retirees. They would do well to take advantage of their electoral enrolment for the same-sex marriage poll and turn out in force at the next election.

Ian McAuley is an Adjunct Lecturer in Public Sector Finance at the University of Canberra and a Fellow at the Centre for Policy Development. In their work Governomics – can we afford small government? Miriam Lyons and Ian McAuley explain how a shared health system helps hold society together.