IAN MCAULEY. Queensland election: a policy challenge for the Coalition

The Queensland election has been a disaster for the Liberal-National Party. There is a risk that the Coalition will misinterpret the result and become even more alienated from the Australian electorate.

While Saturday’s election in Queensland may not have given Annastacia Palaszcuk the decisive majority she was hoping for, by now it is clear that her government will continue in office.

It was an impressive result, because Labor had to confront four difficulties. The first was the likelihood of what statisticians call “reversion to the mean”: after a 14 per cent two-party preferred swing in 2015, it would not have been surprising if there had been some swing in the opposite direction. The second was the fact that compared with the extremism of the Newman Government, Opposition Leader Nicholls came across as more moderate. The third was the tough economics of the end of the mining boom: although southeast Queensland is doing well, the mining regions are not. And the fourth was the general discontent of voters in many democracies. That discontent was manifest in a poor primary vote for both the main parties: the Labor plus LNP vote was below 70 per cent.

While the election was tough for Labor, for the LNP it was a disaster. The LNP will probably go through its usual rationalisations, attributing the result to everything except their own policies: Nicholls didn’t get his message out.

And of course there was One Nation taking their votes.

Some in the LNP will be mourning the arithmetic of the election: if only the 33 per cent for the LNP plus 14 per cent for One Nation could have been consolidated in a conservative bloc of 47 percent they would have easily won with the help of a few preferences. It’s almost a mirror image of the national situation in the 1950s and 1960s when the “left” vote was split between Labor, the Communists and the DLP. Already we are hearing federal LNP members Matt Canavan and George Christiansen urging the Coalition to shift to the right.

Others in the Coalition with cooler heads will realise that the situation is more complex. There was no way one party could satisfy the demands of non-metropolitan Queensland and the people of the urbanised south east with one suite of policies or one election pitch. In this regard Queensland’s politics are a microcosm of the politics of the USA, the UK and Germany which have all faced similar problems.

The Labor Party, with its last-minute rejection of support for a loan for Adani (and perhaps a reading of the extraordinary Green win in Northcote, Victoria), went for a strategy of sacrificing support in the north and building support in Brisbane. It worked – just – but demographic movements mean that it should be a successful strategy for the future. And what goes for Queensland goes more strongly for the nation’s more urbanised other states and territories. A swing to the socially-conservative right would not be a sound strategy for any party.

The performance of the Liberal Party (and its LNP equivalent) in the last eight elections has been dismal. In every state or federal election over the last three years the Liberal primary vote has slipped, and in all but one (Saturday’s Queensland election), Labor’s vote has improved. A summary of the swings in those elections is shown in the table below, and I expect that the Tasmanian election, early next year, will add another similar row to the table.

As many have pointed out, Queensland’s election confirms people’s disillusionment with the established parties. That’s by no means a unique Australian phenomenon – think of the protracted negotiations following the recent German elections. It was Labor’s fortune on Saturday that Queenslanders seem to be a little more disillusioned with the LNP than they are with Labor.

Although some commentators suggest that this drift away from the major parties is a recent development, it has been in train in Australia for the last seventy years, as shown in the two graphs below relating to federal results for the Labor and the Coalition. 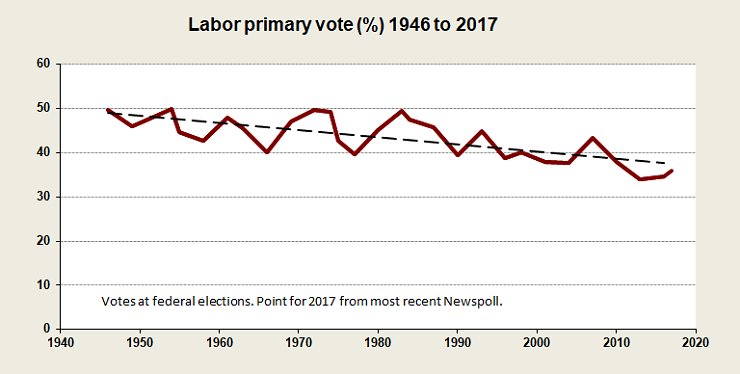 Even though Labor has had at least two sudden setbacks – the “split” of 1955 and the Whitlam Government’s dismissal  – when viewed over a longer term its decline has been fairly steady. 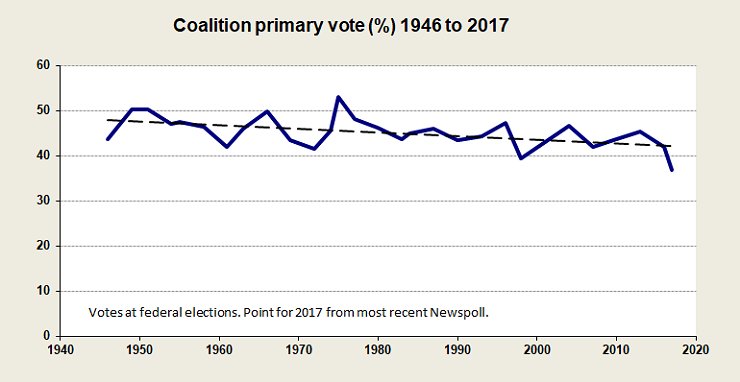 The Coalition’s decline is somewhat different, because although over the whole period it has held up better than Labor, its downturn has been more pronounced in the last twenty years, falling from 47 per cent in Howard’s 1996 victory to around 37 per cent at present – a period coinciding with a drift of the Party to the right, starting with Howard’s purge of moderates in the Liberal Party.

Towards a multi-party democracy

The official line from the Coalition nationally is that the Queensland election result has nothing to do with federal issues. Perhaps there is some truth in that claim, in so far as the citizenship problems are confined to the Federal Parliament, and Tony Abbott’s sniping has no connection with Queensland.  (The LNP had its own Tony Abbott in Campbell Newman who was on television trying to “help” his party by reminding Queenslanders of his time as premier.)

But there is a federal link, and it relates to the Coalition’s general policies manifest at both state and federal levels: the influence of social conservatives, its contempt for the collective good, and its capture by special interests representing so-called “business interests” (aka rent seekers). In environmental policies – subsidies for the coal industry, support for land clearing, and opposition to marine parks – the national and Queensland parties are closely aligned.

If the Liberal Party wants to avoid a slow but terminal decline it would be well advised to break the coalition arrangement with the Nationals, and to de-merge the parties in Queensland and the Northern Territory. Nationally that would leave the Liberals in a minority government, and they may have to wear a few bits of legislation, such as a banking commission, going through parliament, but they would be unlikely to face a vote of no-confidence. And a further and necessary move would be to rule out ever accommodating far-right populists, such as One Nation. (In Germany Angela Merkel’s Christian Democrats, in their struggle to put together a government, have completely ruled out doing any deal with the Alternativ für Deutschland.)

In the ABC’s political panel on Saturday night, apart from Antony Green’s wonderfully professional interpretations and projections, there wasn’t much to learn from the commentators, whose dialogue was as predictable and vacuous as that of footballers giving a match post-mortem.

But at one stage, when it appeared that neither Labor nor the LNP could possibly assemble the numbers, Federal Liberal politician Jane Prentice broke from script and citing Denmark as an example where no party could ever expect to hold a parliamentary majority, suggested that the time may be coming when we need to break from the assumption that there is something intrinsically undesirable about a “hung” parliament or a “minority” government.

As John Menadue has written “We need to acknowledge that we have in effect a multi-party system but we refuse to admit it.”  Is there some way the message can get through to our two old, established parties?