IAN McAULEY. Reclaiming the ideas of economics: Debt and deficits

An obsession with “balanced budgets”, promoted by successive Coalition governments, is having serious economic consequences.

The Coalition owes much of its electoral success to a public belief in its capacity to manage the economy, even though its record in economic management speaks otherwise. In its terms in office it has neglected structural reform – in some cases reversing economic reforms. This neglect is manifest in stagnant and declining real incomes, widening inequality in wealth, weakening labour productivity, high household debt and unaffordable housing.

The Coalition has deliberately nurtured the myth of its competence by a focus on one aspect of economic management – the deficit or surplus in the Commonwealth budget. As Paul Keating says the Liberal Party has a “surplus virus” in its bloodstream.

The political appeal of the budget outcome lies in its simplicity. It’s the government equivalent of our own domestic bank accounts. We also know of instances where hyperinflation has resulted from fiscal recklessness by desperate or populist governments – the US Confederacy, the Weimar Republic, Zimbabwe, Venezuela.

But even within the conservative traditions of mainstream economics, there is nothing “bad” about a budget deficit, and nothing “good” about a budget surplus. To continue with the domestic analogy, most of us have gone into debt at some stage to buy a house. And we would surely not judge someone to be a good economic manager if they had accumulated a big surplus in their bank account while neglecting to spend to fix the brakes in their car or skimping on spending on food.

So too with government; running its bank account – fiscal management – is one small, but over-emphasised, aspect of economic management.

One of the basic responsibilities of government is to stabilise the economy – to counter the swings of the business cycle. If the economy is in a downturn with rising unemployment the government steps in with a stimulus; if it’s overheating with high inflation and shortages, the government should step back.

That’s how governments, Coalition and Labor, have been managing economic stabilisation for the last fifty years (and longer), as shown in the graph below.  The red line shows outlays, the blue line shows receipts (mainly taxation), and the deficit or surplus is the difference between the lines.

Unsurprisingly it shows that governments, in line with orthodox theory, have engaged in stimulus spending following economic shocks. The Whitlam Labor Government had the bad luck of holding office just when the fixed exchange rate mechanisms of the Bretton Woods order fell apart and as the first oil crisis sent shockwaves through the world economy: it would have been grossly irresponsible for it not to have run a deficit in response. In 1983 it was the Coalition’s turn for bad luck, for the “Volker shock” occurred on their watch when the US Federal Reserve raised interest rates from 11 per cent to 21 per cent.

In 2007, after barely a year in office, the Rudd Government had to deal with the GFC. As the graph shows there was a sharp drop in revenue, and thanks to quick and decisive action, a sharp rise in spending. Some economists criticise the Rudd-Gillard Government for not having withdrawn its stimulus sooner, but whatever they did, there would be a run of deficits during their time in office allowing the Coalition to associate Labor with deficits. It was easier and more politically convenient to demonise Labor than to explain the mechanisms of conventional Keynesian counter-cyclical management.

The Coalition’s claim to economic responsibility was helped by its run of surpluses during the 13 long years of the Howard Government, a government that enjoyed the benefits of a huge gain in revenue resulting from the Hawke-Keating reforms (notice the sharp rise in the blue revenue line) and a surge in commodity prices.

The consequences of the deficit obsession go well beyond its use in the Coalition’s anti-Labor armoury. It has also meant that while public sector debt has been kept in check, private sector debt, particularly household debt, has accumulated. The graph below shows how household debt has risen over the last thirty years: Australians held back for a couple of years following the GFC, but as wages stagnated and as households had to dig into their own finances to compensate for cuts in government expenditure, household debt climbed once more, and is now being encouraged by low interest rates and by the government spruiking the real-estate market. 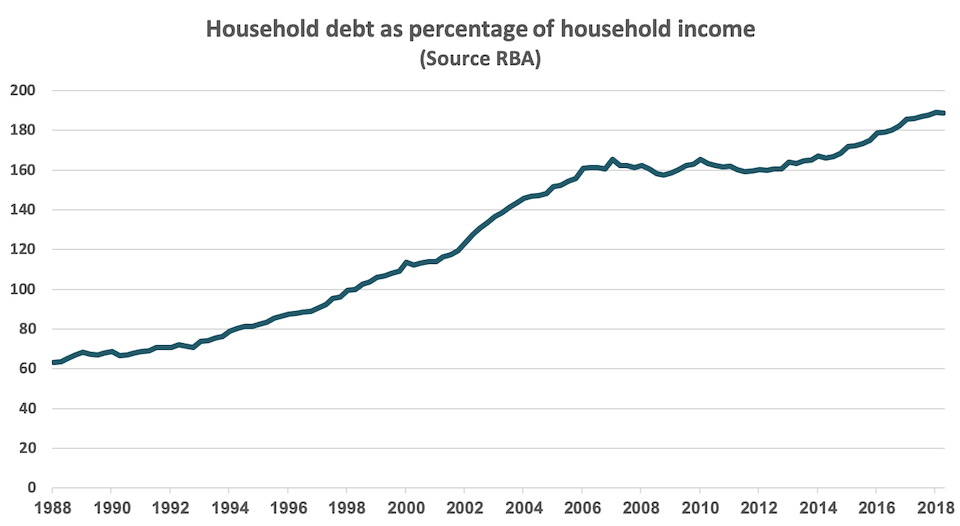 In short, as a result of the obsession to balance the books, debt has been privatised. Through their taxation and spending powers governments have more capacity to absorb shock than households – that’s what Keynesian stabilisation is all about, but for the sake of impression management that debt has been shifted off the government books and on to those with least capacity and competence to deal with it.

The government debt obsession has even wider consequences. Trapped by its own rhetoric and a promise to bring the budget back into surplus, the present Coalition Government is politically unable to engage in fiscal expansion, even as the economy is showing signs of hard times ahead.

It is also trapped by accounting standards that apply in our federation, because any capital grants the Commonwealth makes to the states for capital purposes – a new road or rail line, even a new dam for the National Party – shows up as an expense on the Commonwealth’s books, rather than as a capital expenditure to be offset on the balance sheet. That’s one reason our infrastructure is not keeping up with our population growth. A firm enjoying assured growth would borrow to finance new and replacement assets, particularly when interest rates are low. But successive Coalition governments have chosen to talk only about cash budgets (with only minor accrual adjustments), rather about public balance sheets.

(As an endnote I acknowledge that I have not mentioned the theory of Modern Monetary Theory, a point raised by many readers of this series in Pearls and Irritations. I have deliberately stuck to economic orthodoxy, although I know that the orthodox model is not quite coping. There is nothing in MMT that contradicts the basic prescriptions of traditional Keynesian economics, however. If anything it strengthens them.)

This is the eighth of a series of articles in Pearls and Irritations  on reclaiming the ideas of economics. Others so far have been:

Society, economy and the environment (October 10)