Policymakers and journalists generally talk about “society”, “the economy” and “the environment” as if they are separate entities, implying a tradeoff of objectives. Such a classification leads to poor policy and promotes unnecessary division.

To most journalists reporting on the Forum Morrison’s stance was about a trade-off between “environmental” and “economic” objectives. Reactions from advocates and interest groups lined up along a spectrum based on where they stood in relation to that assumed tradeoff.

Sopoaga’s few words, however, reflect a completely different way of thinking. He wasn’t thinking about a trade-off: if (when) sea levels rise as a result of climate change, his nation is wrecked. Whether that wreckage is called “economic” or “environmental” is only a semantic point: the system that sustains human life on Tuvalu and other low-lying Pacific islands would become damaged beyond repair. That’s a system in which natural and human-made elements – plants, roads, fisheries, fresh water supplies, sea shores – interact in ways that are practically inseparable.

And so it is on a global scale, particularly in relation to climate change resulting from human activity, which involves complex feedback loops between human and natural sub-systems. As far as human welfare is concerned, there is no “economic” system which stands alongside an “environmental” system. There is one interactively complex system which sustains life, and whether we call ourselves “economists” or “environmentalists” our aim should be to use resources in a sustainable way.

That’s not the only false tradeoff that leads to muddled thinking. Another, equally meaningless, is an idea that government policies need to be “balanced” between “social” and “economic” objectives.

But what is the point of any policy that does not contribute to human well-being? There is a story, possibly apocryphal, from the Vietnam War, about an American senior officer who said “we had to destroy the village in order to save it”.  It is no less absurd for a politician to say “we had to cut social programs in order to meet our economic objectives”.

In the ongoing arguments about management of the Murray-Darling basin, we often hear journalists and politicians talking about a three-way tradeoff in the allocation of water between “environmental”, social”, and “economic” uses as if they are somehow separable.  (The language of the plan itself is a little more disciplined.)

When issues are framed in terms of such tradeoffs, particularly when  “the environment” is pitched against “the economy”, “the environment” will inevitably lose. A tragic example was in the 2019 election where Morrison and his media supporters deliberately established a tradeoff between action on climate change on one hand and “jobs and growth” on the other. Gone was any possibility of a campaign about a transformed energy sector providing economic opportunities.

This separation is formalised in what is known as “triple bottom line” reporting. It is formalised also in the way public policy is classified: for example government spending is often classified as being “social” or “economic”, as if there can be economic programs that are separate from social outcomes. Portfolio responsibilities are subject to such divisions: Treasury, Finance and Transport departments are “economic”, Health and Education are “social”, Environment is as its name suggests. Policy development becomes a set of bargains between these agencies, with little opportunity for finding integrative or “win-win” outcomes: in fact the Commonwealth’s public-sector management framework actually discourages inter-agency cooperation.

At a broader and international level the society-economy-environment division is manifest in  time-honoured but increasingly dysfunctional groupings of political parties as Social-Democrat/Socialist/Labor (Society), Christian Democrat/Conservative/Republican (Economy) Green (Environment) parties, even when many people are demanding a different way of considering issues.

Logically this way of thinking is what philosophers call a “category error”. If someone were to say “at the Victoria markets you can buy food, vegetables and lettuce”, the category error would be obvious: each should be nested within a higher order. That example is trivial, but for an example with more serious implications consider the way journalists talk about Britain and Europe – using categorisation to reinforce the idea of separation. From the outset pro-Brexiteers deliberately referred to “Britain and Europe”: now almost everyone has slipped into that usage.

The philosopher Karl Polanyi, writing in 1944 (The Great Transformation), commented that in times past markets had generally been contained within societies and subject to social norms. His prophecy, which seems to have been fulfilled, was that there would come to be a “great transformation”, in which this order would be reversed: societies would become subject to the rules of the market. 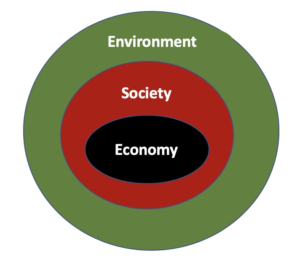 Some people, aware of the way “triple bottom line” thinking restricts our thinking, go for a different classification of these elements – for example a nesting to denote a hierarchy of dependence.  Some others go for partially overlapping venn diagrams.

Whatever frame of thinking we adopt – a nested classification or an ecological system-wide frame – it is important to move away from the tradeoff model. It’s a model that not only gets in the way of proposals that allow for benefits all around, but that also invites policy advocates to assign themselves rigidly to one of the three camps. For some – perhaps many – people the society-economy-environment division is manifest in an imagined Labor-Coalition-Green division.

This is the fourth of a series of articles in Pearls and Irritations  on reclaiming the ideas of economics. Others so far have been:

Ian McAuley  is a retired lecturer in public finance at the University of Canberra and a Fellow of the Centre for Policy development.