So long as we talk about taxation as a “burden” we will overlook the civilising effect of public expenditure.

Perhaps you were too concerned with the upcoming election to have noticed the significance of April 17. That was “Tax Freedom Day”, “when Australians finish paying taxes to governments and begin working for themselves”.

Tax Freedom Day is a moveable feast created by the right-wing Centre for Independent Studies. Based on an estimate that taxes collected by all levels of government account for 29.3 per cent of GDP, the CIS uses the calculation 0.293 X 365 = 107, to work out that day 107, or April 17, is the day when we have finished paying our taxes.

There is no fault with this simple arithmetic, but it’s the language that counts: “freedom”, “governments”, “working for themselves”, and the multiple use of the term “tax burden” in the accompanying press release.

It’s as if governments are great kleptocracies taking our hard-earned money for their own purposes, rather than the means we use to fund things we choose to share – things that private markets either cannot provide or cannot provide so well. It’s as if working to buy cars or clothes for our exclusive use is unquestionably preferable to working to pay for our contribution to collective goods such as health care, education, or roads on which we drive our cars. The contrasting words “freedom” and “burden” convey a value-laden way of thinking, which, without argument or justification, prioritises the private over the collective.

A moment’s reflection reveals the fallacy of this way of thinking. We need only imagine life for the average person in a country – a “failed” or “failing” state – where a government lacks the capacity or will to collect taxes beyond what it needs to protect a ruling elite, where children are on the streets rather than in school, where simple diseases carry a death sentence, where criminal gangs extort businesses and households, and where life is generally “nasty, brutish and short”. If that is what the CIS understands by “freedom” it’s a weird way of thinking.

The CIS imported its idea of “Tax freedom day” from the United States – a country which itself is showing signs of state failure – but where, in times past more liberal ideas have prevailed. Carved in stone above the entrance to the Internal Revenue Service building in Washington is a quote from the jurist Oliver Wendell Holmes “Taxes are what we pay for a civilized society”.

But we seem to have lost that way of thinking. It’s not only far-right think tanks who talk about taxes as an assault on our freedoms. The Liberal Party explicitly states in its platform  that only the private sector creates wealth and employment, meaning that the public sector is simply a big unproductive overhead.

It is absurd, however, to think that a teacher in a public school is doing nothing of value, or that a police officer is a useless decoration, while a private school teacher and a private security guard are providing useful service. But this is the thinking that drives a belief in “small government”, even if that means we have to pay dearly for private agencies to do what governments can do at lower cost and more equitably.

It’s not only the right that thinks this way. Politicians of most colours talk about the tax “burden”.  Many economists talk about “the deadweight loss of taxation”, an economic term to describe all the economic activity that doesn’t occur because of taxes – an opportunity cost. Consumers spend less on private goods and services because of income and consumption taxes, companies invest less because of corporate and payroll taxes. It’s a valid concept, but it’s applied only one way, because there’s also a deadweight loss associated with paying not enough taxes – the public schools we don’t have, the roads that don’t get built, the broadband service we don’t have – or the extra cost of these services because they have been put to the private sector. Right-wing governments typically accuse the left of paternalism in providing public services, but the charge of paternalism can equally be applied to them, when they take the attitude that even though the electorate may want and be willing to pay for more public goods, the government knows better and will push an agenda of tax cuts.

That agenda is supported by campaigns such as “Tax freedom day” and other right-wing stunts, and more generally by journalists and others who lazily talk about the “tax burden”, as if taxes have no relation to public goods and services.

Fuelled by anti-tax rhetoric, Australians are hardening in their attitudes to taxation. The regular Tax Survey conducted by Per Capita shows that while about 70 per cent of Australians believe governments should spend more on public services – particularly health and education – that parentage has fallen in recent years. That same survey finds that half of us believe Australians is “a big-taxing, big government country.”

Such has been the propaganda about our “tax burden” and the desirability of tax cuts that only about 5 per cent of respondents to the Per Capita Survey correctly identify Australia as a “low-taxing, small-government country”. Among prosperous “developed countries”, only two countries have lower taxes.  Australia’s rank, down near the bottom, is shown in the graph below. 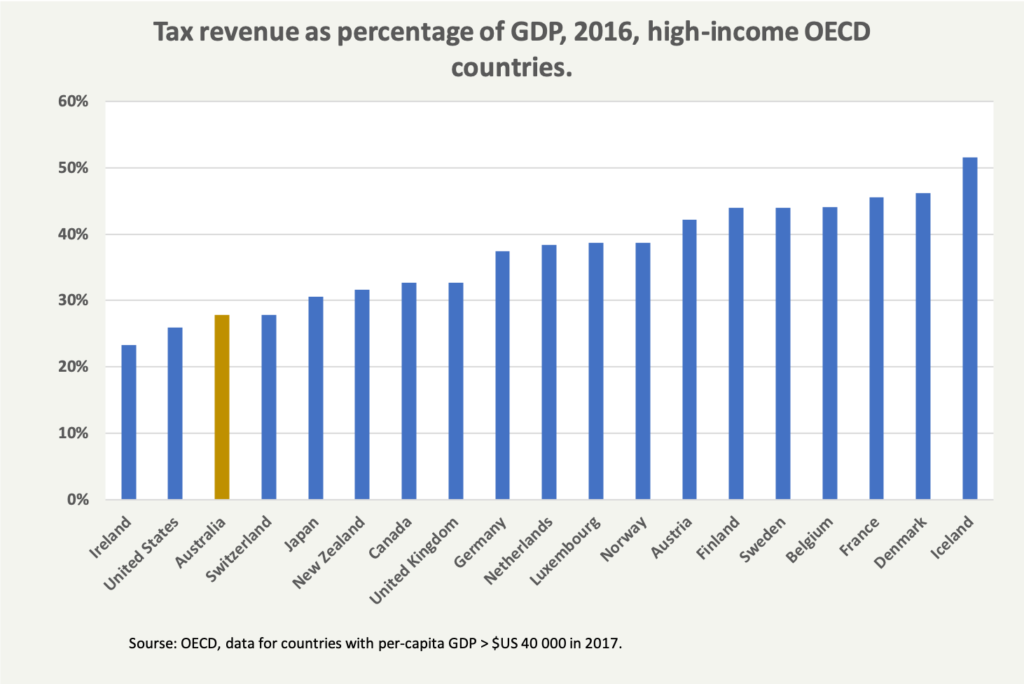 In that ranking Ireland is a special case, because of accounting distortions in its GDP measures resulting from its low-tax incentives for multinationals (what Paul Krugman calls the Leprechaun Economy  effect). And the USA is consistently running a huge budget deficit – around 5 per cent of GDP.  If it were collecting enough taxes to come close to a balanced budget its taxes would be up there with Britain and Canada. And the country with only slightly higher taxes than ours, Switzerland, has measurement issues similar to Ireland’s because of its tax haven status.

Unless we are to go down the dismal path of public squalor, we need to re-frame the way we think about taxes. Journalists could write about the “tax contribution” instead of the “tax burden”.

Or, following the example of the CIS and  the language of Oliver Wendell Holmes, we could celebrate 15 September as “civilisation day”, when, having satisfied our personal needs, we can spend the remaining 107 days of the year working for the common good, or the ‘common wealth’ to use a term that has slipped out of fashion.

This is the sixth of a series of articles in Pearls and Irritations  on reclaiming the ideas of economics. Others so far have been:

Ian McAuley  is a retired lecturer in public finance at the University of Canberra and a Fellow of the Centre for Policy development.