Many public debates are framed in terms of compromises or balances between “economic” and “social” objectives. Such ordering is confused: economic policies are meaningless unless they serve social ends.

“We had to destroy the village in order to save it”.

This was one of many absurdities emerging from the Vietnam War. It has never been clear who said it, but it encapsulates the means-ends confusion that kept America (and Australia) engaged in that terrible conflict.

In everyday public policy there is a similar means-ends confusion in economic policy. Among most policymakers and media commentators it is a matter of faith that there has to be a balance between “economic” and “social” objectives, with the economics assuming a primacy.

The idea of a “balance” seems innocuous, but it implies that economics and the society are separate entities. It is in contrast to the idea that economic policy should serve social objectives, and it elevates the status of economic indicators.

In the Vietnam War the “body count” became the perverse performance indicator of American and allied forces. In economic management GDP growth assumes a similar role. A run of 26 years without a recession, the longest run of all “developed” countries, has become a testament to the success of our economic management. (I’ll unpack that claim a little further on.)

But what is the point of generating impressive economic indicators if our economy is not serving society? 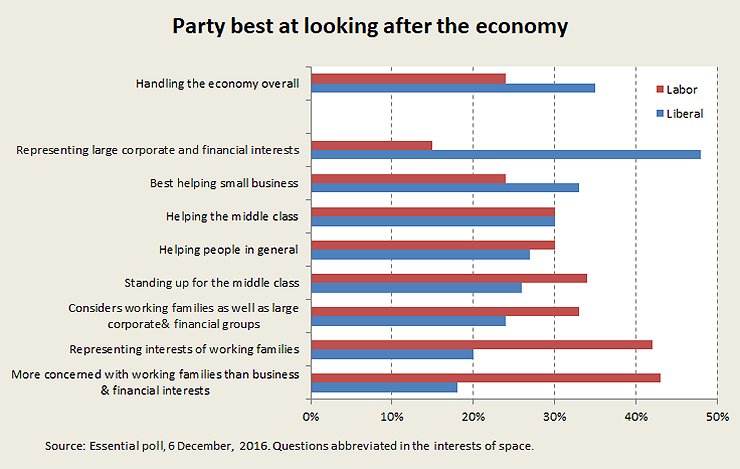 The chart above, derived from Essential media polling, reveals what comes to people’s mind when they think of economic management.

Australians clearly believe that in the economic domain the Liberal Party is more competent than Labor. But the poll also reveals what people consider economic management to mean. The Liberal Party’s supposed competence rests on its capacity to look after the interests of “business”, large and small, as if “businesses” are incarnate entities that have some interest apart from and superior to those of their stakeholders. Labor’s supposed competence is about looking after people – “working families” in particular.

The only way this and similar opinion polls make any sense is if people believe that “the economy” is something to do with business, but has little to do with people. Otherwise they would not have scored Liberal ahead of Labor in overall economic management. One may quibble with the accuracy of people’s judgements (for example, the Keating Government was generous to corporations), but the message about people’s perception is clear. We have allowed economics to become defined as looking after business interests, de-coupled from its public purpose. No wonder economists are not trusted.

It gets worse, because GDP is an indicator of production that takes place in Australia, not  the benefits that flow to Australians from that production. Because of our dependence on foreign capital, the indicator that should count is what’s left after the flow of dividends and interest to foreign investors. The mining boom inflated our GDP, but many of the benefits flowed overseas, and national accounts disregard resource depletion as a cost. (Think of Nauru’s short-lived prosperity in the 1970s.)

With the end of the mining boom our net disposable income per-capita – a measure that nets out payments to foreign shareholders and creditors – has hardly risen since 2012.  As many people know when they do their weekly shopping, our real incomes have been stagnating.

All these gross measures say nothing about how the benefits of economic activity are distributed. And they are subject to long-recognized limitations in official accounts, which measure only transactions in which money is exchanged, and tend to understate the value of publicly-provided goods and services because they are not produced in a “market”. If a public hospital uses efficiency improvements to reduce per-patient cost, GDP falls: if a private hospital manages to charge more per-patient without any improvement in service, GDP rises.

Car accidents and cyclones boost recorded economic activity, but they don’t make us better off. A reduction in domestic violence or institutional sexual abuse would clearly be of benefit, while probably reducing recorded GDP. Commercial child-minding contributes to GDP, but similar services provided by grandparents don’t. When set with an assignment to list the limitations of GDP as an indicator of well-being, students find it hard to keep to a 3000 word limit.

Those who developed national accounts in the 1930s, most notably Simon Kuznets, appreciated their limitations, and never intended them to assume league-table importance. Recognising the need for something more relevant, between 2000 and 2013 the ABS led the world in developing a broad set of well-being indicators, Measures of Australia’s Progress, that went well beyond the limitations of national accounts, but this initiative was axed by the Abbott Government, presumably outraged at the idea of a government agency achieving world-acknowledged excellence.

Economic management is a means to an end, that end being the maintenance of well-being for all. It should not become an end in itself. It is true that without attendance to economic management material living standards will fall or stagnate, but it’s a logical fallacy to believe that everything that generates impressive economic indicators improves living standards. That’s an incorrect inversion of a syllogism, and one doesn’t have to be a logician to see the fallacy. Every wheat farmer, for example, knows that without rain crops will fail, but that doesn’t mean rain will always improve the harvest – not if it comes at the wrong time, or if it comes as a torrential downpour.

The idea of a tradeoff between “economic” and “social” objectives, with a primacy for economic objectives, has led to the belief that good economic management is about attending to business interests. That’s been convenient for corporate executives and speculators. Unfortunately, many on the “left” have also bought into that belief, leading them to disengage from economics and therefore to abandon the economic principles that have historically underpinned progressive political movements.

This is the third a series of eight articles on re-framing public ideas, to be published over January 2018. Others so far have been