Governments brag about the number of jobs created on their watch. Does our obsession with “jobs” distract us from other ways in which people can contribute to society and share in its bounty?

Next to figures on GDP, governments are most concerned with monthly employment data. Because the ABS produces so many labour force data series, governments almost always find at least one positive figure – the number of new jobs, hours worked, the unemployment rate, the participation rate, with a choice of original, seasonally-adjusted or trend terms. By the same token those seeking a negative story can always find data to support their partisan lines.

An obsession with these short-term fluctuations distracts us from long-term trends in the way work is changing, or – in the terms of those economists who reduce all transactions to commodity exchanges – trends in the “labour market”.

Over the last forty years Australians of working-age (in itself a shifting concept) have been putting in about the same number of hours of paid work every year – in fact a little more. But those hours have been spread over more people doing some form of paid work. Within that broad trend, the gender mix has changed profoundly: 40 years ago there were roughly two men for every woman in paid work; now the mix  is close to 1:1.

The strongest trend has been the erosion of full-time employment. In 1978, 85 per cent of people at work were in full-time jobs: now it’s just below 70 per cent. Among men the decline over the same period has been from 96 per cent to 83 per cent.

Among both men and women there has been a trend towards part-time and casual employment – some by choice, some by necessity. Self-employment, once confined to farmers and a few trades and professions, is growing. At one end of the spectrum some are thriving in the “gig” economy, while at the other end “self-employment” means exploitation in the shadow economy of cash payments and sham contracting. 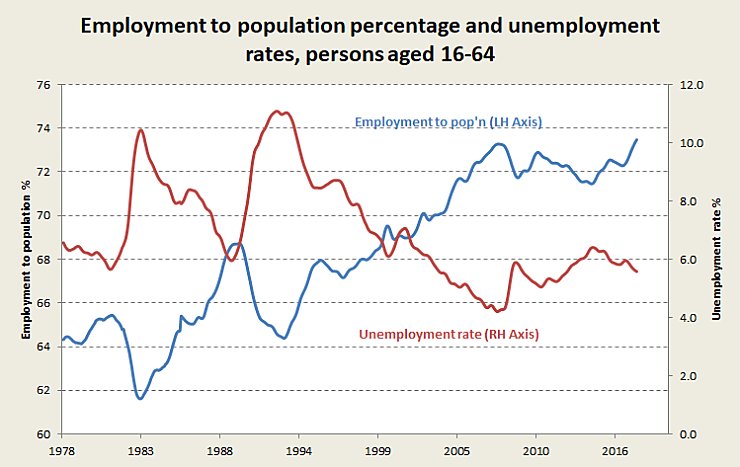 While there is a long-term trend for the officially-recorded unemployment rate to fall, some people, particularly those without post-school qualifications, suffer high and often long-term unemployment, under-employment, insecure employment and low wages.

There are many who would like to work more hours but cannot find the opportunity, while there are others, under the pressure of oppressive performance management schemes, are trapped in an “arms race” of overwork.

Behind these trends has been a widening dispersion in people’s income from paid work. Average incomes are pulled upwards by generous pay for senior executives, some professionals, and people in the finance and legal sectors (not extending to front-counter staff). Median wages, however, are significantly lower than average wages.

The “job” with benefits of sick and annual leave, workers’ compensation, and certain protections is not in imminent danger, but nothing will restore it to its earlier prominence. Malcolm Turnbull may prattle on about “jobs and growth”, Donald Trump may promise to bring back those “jaarbs” in mining coal and making Fords that once made America great, but they’re not coming back, because the nature of our economies has changed.

The overwhelming economic development has been a huge advance in labour productivity, particularly in the market sector. Put simply, we just don’t need so many people to make and distribute all the stuff we want (let alone the stuff we really need). That’s been the tremendous achievement in 300 years of technological progress, and it isn’t just about globalization – even India and China are moving away from labour-intensive farming, manufacturing and production.

At the same time there are unmet needs in areas that markets cannot serve, in areas such as health care and education – tasks that are intrinsically labour-intensive – but we are constrained by a dogma that there is something virtuous about “small government”.

Then there is unpaid work, ranging from caring for children and the elderly, through to community activities such as Landcare. According to an ABS survey in 1997, around a third of our economy’s output is in unpaid and unrecorded work.

Automation, once the bane of “blue collar” and simple clerical jobs, is now making its way into technical abd professional employment. Information technologies have also been shifting work (and a certain degree of control) on to the customer. Your internet searches do away with the travel agent, your supermarket self checkout does away with the checkout staff. That’s work-shifting, not work-destroying, but it eliminates “jobs”.

While automation threatens many “jobs”, people with confidence, qualifications and social skills are enjoying expanded options, particularly if they have aims in life other than making a heap of money. They can find alternatives to corporate or government employment in a “job”. Self-employment, establishment of microbusinesses and contracting are all options, made possible by new technologies and the tumbling costs of tools of trade. Many older workers, tired of being ridiculed and humiliated by corporate martinets, make such moves, and some young people short-cut the process by venturing straight into self-employment.

As Voltaire said “work keeps at bay three great evils: boredom, vice, and need”, and for those whose material needs are easily satisfied, driving a Uber cab, establishing a craft brewery, developing new apps, or writing a novel – all highly competitive ventures – may gain little in the way of monetary rewards, but such activities satisfy many other needs. The “gig” economy is not new, but it can no longer be dismissed as something on the margin: it’s becoming mainstream.

Yet the “job”, an arrangement involving an “employer” in a paternalistic relationship with an “employee”, dominates policymakers’ idea of work. Our superannuation system, for example, works superbly for someone who after graduating in their early twenties has 45 years of unbroken employment, but for many others it fails. Our income tax and social security provisions are designed around steady, rather than fluctuating incomes. Universities and professional bodies are still largely bound by the idea of an upfront education for a lifetime profession.

Trade unions, which historically kept the excesses of capitalism in check when most workers were in full-time work in large establishments, now find their base concentrated among older professional workers in teaching, health care and public administration: only 17 per cent of workers are now in trade unions.

Industry lobbies such as the ACCI and the BCA, and many politicians and journalists, still live in the nineteenth century world where there was a class of enterprising and worthy “employers” and a class of dependent “employees”, with a clear division between the two.

More generally we seem to accept that any policy that creates or saves “jobs” is good policy, without questioning the nature of those jobs or asking if they create any value for the community. Surveys find that perhaps 50 per cent of people are unhappy with their work, and a proportion actually hate their work: the work environment is a contributing factor to clinical depression.

We are all familiar with what anthropologist David Graeber calls “bullshit jobs” in the administrative layers of public and private sector organizations, and “jobs” that add little or no value (even negative value) in industries such as advertising and public relations.

Politicians pride themselves on saving “jobs”, but there is surely a lot of work we could do without. Improving Queensland’s deadly Bruce Highway, for example, could take away a lot of work from police, nurses, surgeons, mortuary workers, smash repairers and others, but by any measure society would be better off without this work.

We need to broaden our thinking beyond “jobs” and think more about ways in which people can make a meaningful contribution to society, can enjoy the non-monetary benefits of work such as status and recognition, and can share in the benefits of their contributions, be those contributions in paid or unpaid work.

The “job” as we have come to know it, is not always serving those purposes. Perhaps we should be thinking about a universal basic income : in Finland, a country with a centre-right government, there is a UBI experiment underway, and even the Scots, whose Adam Smith has so strongly influenced our economic ideas, are giving it a thought.

Otherwise our search for “jobs” as we once knew them is going to be elusive.

This is the sixth in a series of eight articles on re-framing public ideas, being published over January 2018. Others so far have been: