Morrison’s words are a plea to trust his government, but his tactics seem to be aimed at spreading mistrust, not only of Labor but also of democratic institutions more generally.

“Who do you trust to deliver a strong economy?” asked Scott Morrison in a doorstop interview last week.

We can overlook his grammatical violation – eloquence isn’t his strong point – but we should not overlook his use of the word “trust”.

While neither Labor nor the Coalition can claim clean records, the Coalition has led the way in breaking trust. As scholars of strategy, game theory and social cooperation confirm, once one party in a two-party contest breaks from norms of cooperation, it’s almost inevitable that the other side has to follow. The Coalition’s outstanding accomplishment was in co-opting the Governor-General and justices of the High Court to conspire in dismissing the Whitlam Government, and since then it has had many precedent-breaking transgressions – blatant lies about “children overboard”, Abbott’s set of election promises that he had no intention of honouring, and a deterioration in the standards of discourse on public policy.

That deterioration has generally been in increasing use of sophistry – language that is logically correct, but which through emphasis, omission or framing, is designed to mislead. Statements such as “I cannot guarantee that there were no terrorists on that refugee boat” or “Shorten cannot guarantee a budget surplus” are logically defensible, but the intention is not to enlighten or inform or even to offer valid criticism.

In the economic sphere there is a huge capacity for framing information favourable to the ruling party – use of actual, seasonally-adjusted or trend estimates, use of nominal or inflation-adjusted figures, comparisons on absolute or per-capita basis, use of means rather than median figures. As examples, Coalition statements on education spending generally omit to adjust for inflation or population growth, while statements on greenhouse gas emissions are always on a per-capita basis, and they use a favourable start date for comparison. The Coalition rightly points out that on average (the mean) income taxes will rise under Labor’s proposals, rather than admitting that the median (in the middle) taxpayer will pay less. Unfortunately most journalists, even those without any personal bias, don’t identify the deception in such framing.

Besides sophistry and lies there is also bullshit, a term that has earned its place in the lexicon of philosophy. As philosopher Harry Frankfurt points out, the liar knows the truth and knowingly departs from it, while the bullshitter doesn’t even bother to try to learn the truth and certainly has no respect for it. Trump is the master at bullshit, but we have plenty of our own, particularly in the way many National Party politicians talk about climate change. The drivel of Coalition-aligned talkback radio hosts is virtually pure bullshit.

Then there is the use “talking points” – carefully-prepared meaningless scripts for ministers from which they never depart, and a refusal to answer questions. There are promises made without realistic time frames, such as the Coalition’s meaningless statements about “congestion busting infrastructure”.

The result is a general disengagement with politics. Apart from a few academics, policy wonks, investigative journalists and determined Senators in the estimates hearings, most Australians have turned off the political debate. We feel patronised, and offended by journalists who rarely challenge this flow of drivel. We know we’re being lied to, but we don’t quite know how. In Australia, as in other democracies, trust in government is in long-term decline, and when people are surveyed on particular institutions of government political parties rate even more poorly than religious institutions, as shown in the diagram below. It seems strange that any politician, particularly one from the Coalition, would be running on a “trust me” platform. 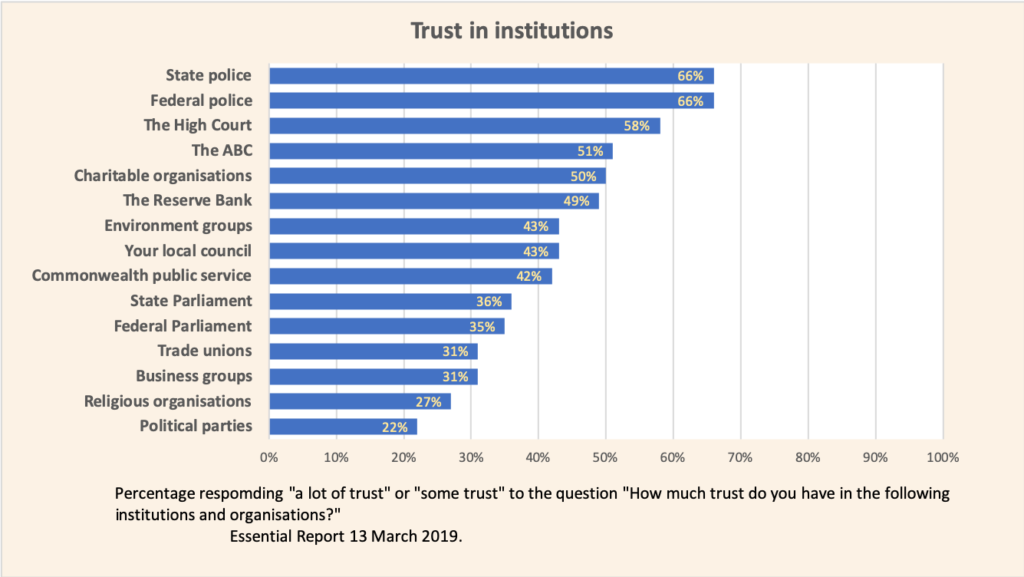 I doubt if Morrison’s spin doctors, armed with the same or similar survey data, would be advising him to rate his ramshackle coalition against Parliament, trade unions and environment groups, because the Liberals and Nationals would come out badly. And when people apply the simple cui bono?  (who benefits?) test to the August 2018 putsch, they are left with some doubt about Morrison’s trustworthiness. One would think that he would be well-advised to leave the issue of trust aside.

When it comes to the economy, at first sight there may be some evidence to back up his assertion. As many contributors to Pearls and Irritations  point out, there is clear evidence that Labor governments have been better economic managers than the Coalition, but survey data consistently finds that voters put more trust in the Coalition than in Labor in “management of the economy” and “controlling interest rates”.

Those findings, however, do not reconcile with findings from the same surveys that give Labor a clear lead in “ensuring a fair taxation system”, “housing affordability”, “fair wages”, “addressing climate change”, ”protecting the environment”, “standing up to big business”, “ensuring the quality of our health system” and “ensuring a quality education for all children”. These are all economic outcomes that affect our everyday lives. They are all about the core concern of economists – the allocation and distribution of resources. It’s as if in the public mind “the economy” is about something abstract – something that goes on in the offices of Treasury and financial corporations. So interpreted, “management of the economy” may even be a political negative, particularly if it is associated with unfairness.  After all, there is a widespread (but false) belief that there is a necessary tradeoff between “social” and “economic” outcomes.

Worldwide voter cynicism and unrest, and the appeal of populist parties, are the result in large part of disillusionment with neoliberal economics favouring the well-off, the model still advocated by the Coalition and re-stated in its recent budget proposals. Since the 1980s governments have justified neoliberal policies on the basis that the benefits of neoliberalism would flow through to the general community, but forty years is a long time to hold people’s trust when at best there has been only a trickle of benefits. Labor’s policies may be unambitious, but at least they recognize people’s frustration, and they do make a slight turn away from neoliberalism and trickle-down economics.

Morrison’s tactic, however, is not about these straightforward comparisons between the Coalition and Labor. Rather than trying to persuade us to trust the Coalition, he is trying to persuade us to mistrust the Opposition. As a recent article by Jack Waterford reminds us, this has nothing to do with evidence: instead it’s an attempt to draw on our fear of the unknown – an imagined evil ready to take away our utes and make us all pay more tax. (Waterford isn’t so sure that this use of fear of the Opposition, so skilfully used by Howard, will work for Morrison, because if anything Shorten “may well be seen as a more steady, stable and predictable person than any of the coalition leaders”.)

That’s a different, and more worrying frame. It aligns with the general practice of right-wing governments in trying to de-legitimise all the institutions of democracy. If we refer back to the chart, we can see many high-ranking trusted institutions that have been subject to sustained attacks from the Coalition – the ABC, environment groups, trade unions and the public service. Through cuts and privatisations, and a general portrayal of government agencies as incompetent, the public service has been severely devalued. The Australian Bureau of Statistics, once among the world’s highest-rating statistical agencies, has had its appropriations cut, leading to a deterioration in the quality of its data. This aligns with the general devaluing and de-legitimisation of science and scholarship, a process most manifest in relation to climate change.

Such destruction of institutions has its historical antecedents, particularly in the Fascist and Nazi Governments of the 1930s and 1940s. Its current manifestations, although less extreme, are in Hungary, Turkey, Brazil and of course in the US presidency.

While there is an influential authoritarian rump in the Coalition, I’m not suggesting that Morrison is an Orban, Erdoğan, Bolsanaro or Trump. Preferential voting, compulsory voting, an independent electoral commission, and a cynical bullshit-intolerant electorate provide us with some protection – for now. The Liberal Party is not fascist, for it has no grand plan to impose a new authoritarian state. In fact it is almost the opposite, for its clear and stated preference is for the government to withdraw to make room for the private sector. It stands guilty of crony capitalism, but not of fascism.

The more serious danger to Australian democracy is past this election, because another term of a Coalition Government, with its “small government” neoliberal agenda, could lead to even more disillusionment and distrust of mainstream politics, particularly if there is an economic downturn. That could lead to a resurgence in right-wing extremism, temporarily held in check by community reaction to the Christchurch murders. It’s worth remembering that just a week after the Christchurch terrorism, in the NSW elections the far-right Shooters Fishers and Farmers Party and One Nation between them came close to first-preference majorities in some seats.  Anyone who has studied the history of Europe in the twentieth century would realise how the onset of the Depression allowed Hitler’s National Socialists to emerge so quickly from the obscurity of a fringe movement to one that was able to secure a governing alliance in a democratic parliament.

That’s why, in the coming election, it’s important to ensure the Coalition isn’t returned to office. Even those who may be generally disposed to the Coalition should carefully consider their vote: for them it may be far better to give the Coalition – the Liberal Party in particular – a spell in opposition to re-build and reform. The trust contest isn’t simply between the Coalition and Labor; rather it’s between our traditional institutions of democracy and those who would impose an authoritarian populist order. Morrison and his colleagues, through their attacks on these institutions, have paved the way for them.

Re-building trust in government and in public institutions is difficult. As John Menadue has suggested  there are steps a responsible government can take to restore trust, and there seems to be far more chance that Labor will move in that direction, because as far as it is possible to ascertain, the Coalition parties aren’t even aware of the problem.

Ian McAuley is a retired lecturer in public sector finance at the University of Canberra. His writings on economic and political issues are on his website.