IAN McAULEY. The housing bubble, inflated by Howard and Costello, is now deflating.

Housing prices in our most overheated markets, Sydney and Melbourne, are falling. The housing bubble is a consequence of reckless economic policies pursued by the Howard-Costello Government, who, in the name of “financial dynamism”, privileged financial transactions over real economic activity.

When CoreLogic last week released its regular report on house prices, showing annual falls of nine per cent in Sydney and seven per cent in Melbourne, CoreLogic’s head of research described it as “the worst fall since the GFC”.  His comments were echoed by press statements such as the Sydney Morning Herald reporting that “Sydney and Melbourne were the worst performing real estate markets in the country”.

While Sydney and Melbourne experienced steep falls, there were modest rises in many other places including Hobart, Canberra and Adelaide, where the press reports were more positive. “ACT shines in shaky market” was the front page headline of the Canberra Times.

Anyone who has observed house prices over a long period would not be surprised by these figures. The Reserve Bank, echoing concerns of international agencies, has been warning about a correction in housing prices for some time, and in any market ever-widening regional price dispersions tend to be unsustainable. It is notable that while on average capital cities experienced a three per cent fall last year, non-capital regions showed an average five per cent rise in house prices.

What is (or should be) surprising, is the general consensus that a fall in house prices is a bad thing.

It is understandable that commentators in Hobart and Adelaide, which have missed out on economic growth, should see rising prices as an indicator of healthy demand, but it is strange that while people complain about rising electricity and gasoline prices, falls in house prices are seen as undesirable. After all, one of Australia’s economic achievements, celebrated across the political spectrum, has been the reduction of inflation from double-digit figures to a present band of two to three per cent. Why weren’t the headlines in Sydney and Melbourne “At last, housing becoming more affordable”?

We get a clue from a comment caught by a roving reporter on the night of Howard’s 2004 election victory. A young man said “Of course I voted for Howard: three years ago my house was worth only $300,000; now it’s worth $500,000. I’m $200,000 wealthier thanks to the Government”. A policy that makes people feel more prosperous, even if the feeling is illusory, is a winner in the short term.

That same house probably now has a market value of $800,000, but is its owner any better off?

In terms of the benefits we enjoy from our houses, their value doesn’t change much over time. They go on providing the same shelter and comfort. They may even have lost some value if we have been slack with maintenance. Or they may have gained some value if we have modernised or extended them, or if there has been local public investment in transport or recreational assets – a new railway station or a park. But such improvements do not explain how, even after discounting the background of economy-wide price rises, the average market value of houses has trebled over the last thirty years. Most of that price increase is simply inflation.

The young man captured by the roving microphone, and many other house owners and speculators, have confused two different concepts of value, a distinction described by Aristotle, Karl Marx, Karl Polanyi and most recently by Mariana Mazzucato. That is the difference between something’s usevalue and its exchangevalue, the former being the value to those who enjoy its services and the latter being the price for which it may be exchanged on the market. In the textbook utopia of free market economics the two values would equate, but we don’t live in such a utopia, and various government interventions have contributed to a widening of that gap. 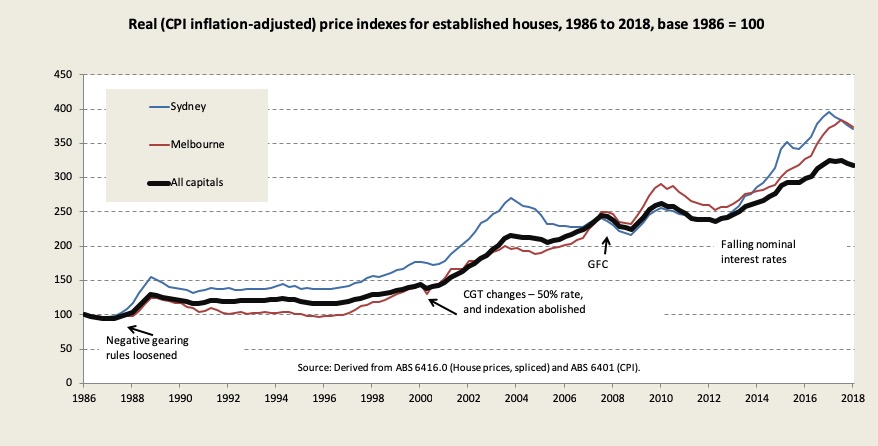 One of the main government interventions was made by the Howard-Costello Government 20 years ago. The young man was right when he attributed the rise in his house’s market value to John Howard.

In 1999, encouraged by the banker John Ralph, the Howard-Costello Government made a fundamental change to our taxation system. They abolished the Hawke-Keating capital gains tax reforms and replaced them with a system that endures to this day, which rewards financial speculation while penalising long-term patient investment. They ushered in the culture of “financial dynamism”, which set off a huge expansion of the finance sector and a twenty-year escalation in housing prices. Houses became chattels of financial exchange.

All asset bubbles deflate – sometimes spectacularly in a balloon burst, sometimes gently. The falls in Sydney and Melbourne probably have some way to go as evidenced by the number of cranes towering over half-completed projects. (The recently-exposed quality problems in the Sydney’s Opal Tower won’t do anything to boost confidence in the market. That’s another story about privatisation of regulation.)

Those who have benefited from the housing sector’s “financial dynamism” will complain as prices and turnover fall. State governments will see lower returns from property transfer taxes. But will anyone else suffer?

The young man with the microphone who felt richer when his property’s market value rose may feel poorer when market values fall, but he shouldn’t.  No one is saying that the use value of Sydney’s houses has fallen by nine per cent.

The immediate beneficiaries of lower prices will be first-home buyers, but they don’t enjoy access to the public pulpit occupied by the coupon-clippers who have done so well from the housing bubble.

A wider benefit of increased home ownership and a more stable rental market will be in the form of more stable communities. Another benefit is that a housing market with less churn (i.e. less “financial dynamism”) saves on transaction costs. Bankers, real-estate agents and mortgage brokers will have an opportunity to pursue more rewarding career opportunities and to do something useful for the community in the real economy rather.

Treasurer Josh Frydenberg has used falling house prices to criticise the Labor Party for its modest proposals to restore some neutrality to the tax system, and the banks for being too conservative, while avoiding any reference to Howard’s and Costello’s irresponsibility in 1999.

If bankers have learned anything from the Royal Commission, which severely criticised them for lax lending, they will not lower their standards, particularly when there are so many headwinds in the world economy. The Reserve Bank will feel under some pressure to reduce interest rates, but doing so could precipitate a run on the already-weakened Australian dollar.

Australians are already carrying a huge burden of household debt, which, as a proportion of household income, has almost doubled since the 1999 Howard-Costello taxation changes: it’s questionable whether even with more lax standards or lower interest rates Australian households have any more appetite for debt. And even if the government could bail-out speculators, such action would only defer the day when a more severe deflation of housing markets will occur. Every bail-out contributes to what financiers call “moral hazard”.

This is a problem of the Coalition’s making. In its five years in office it has had every opportunity to rectify Howard’s and Costello’s irresponsibility, but instead has fuelled the false hopes of naïve housing speculators while enriching its mates in the finance sector.

Ian McAuleyis a retired lecturer at the University of Canberra and a fellow of the Centre for Policy Development.