IAN McAULEY. The National Electricity Market is a mess. Morrison wants to make it messier.

The National Electricity Market needs re-design involving re-nationalisation of networks and “retailers” because privatisation and structural separation have failed.

The National Electricity Market (NEM) – the set of arrangements brought into being twenty years ago to join up the electricity networks in southern and eastern Australia – is not fit for purpose. Unless, of course, that purpose was to create jobs for bureaucrats and lawyers and to generate corporate profits at the expense of consumers.

Before the NEM was established each state had its own government-owned electricity supplier, vertically-integrated all the way from the power stations through to residential and business electricity meters. Apart from power sharing from the Snowy hydro scheme, there was very little connection across state borders. There were some local variants, but the essential model was one of state-owned utilities.

It made good sense to join up these systems physically. It also made sense to bring in competition at the generating end of the businesses, particularly if electricity was to be traded across state borders.

But rather than implementing a simple rearrangement of functions with interconnecting power lines and carving generation off into a competitive market, the ideology of privatisation and a faith in simple economic models were allowed to take over.

Breakup of the utilities – structural separation

Electricity supply can be thought of as having three components – generators, networks, and retailers. In rough terms about a quarter of your bill is associated with generating electricity from coal, gas or renewable sources, about half is associated with the networks that convey it from the power station to your home or business, through high-voltage transmission lines, local low-voltage lines and transformers that step it down to workable voltages, and about a quarter of your bill pays for the “retail” functions of metering and billing.

These proportions move around from time to time, but the main point is that although generation is only one relatively small part of the final bill, in the public’s mind there is a tendency to over-estimate its cost.

It has been convenient for the Coalition, the coal lobby, and the climate-change warriors in the Murdoch media, to focus on the supposed cost of renewables as a driver of electricity prices, but as shown in the graph below, the steep rise in prices took place well before the Gillard Government set a modest carbon price, and they are now even higher than in the days of the carbon price. The steep price rises were due to costs incurred in the privatised (and in some cases corporatised) networks and retailers.

Some of these increased costs were unavoidable: by the end of the century there was a backlog of needed investment in the utilities. But much of the increased cost stemmed from converting the utilities to a for-profit model, through privatisation and corporatisation, a conversion that was based on naïve economic ideas that failed to take into account transaction costs, consumer needs and the different technologies along the supply chain. 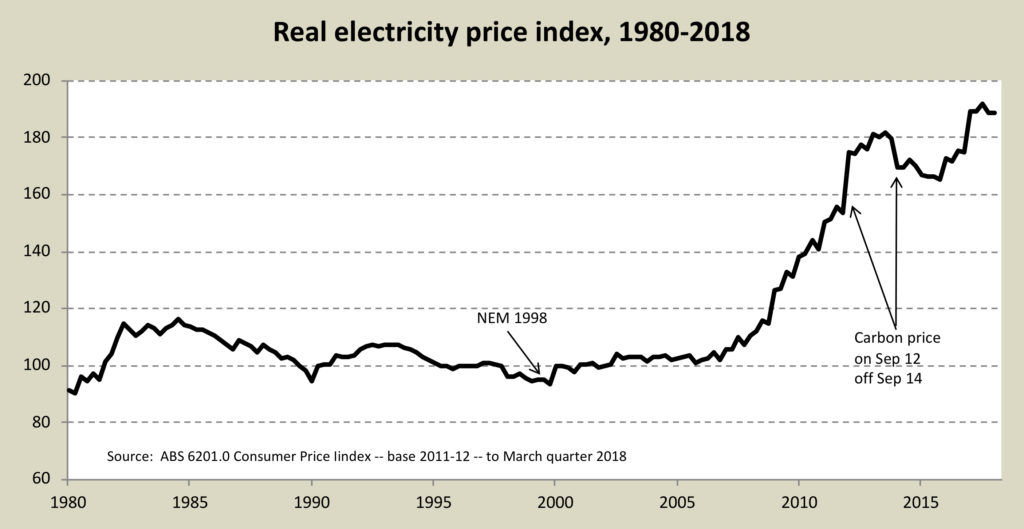 Why the NEM has failed

At the generating end, provided there is genuinely a national market, letting market forces operate with only light regulation should work. It’s an industry where, to the disappointment of the fossil-fuel industry, vigorous competition is driving innovation to bring down costs.

The networks are entirely different, however. For a start they are “natural monopolies”, which means there is no realistic possibility of competition. Also, the transmission and distribution of electricity is a technologically mature industry, in basic ways unchanged in 120 years, and any productivity improvements are at best incremental. Furthermore the industry is capital-intensive: privatisation is often a means of breaking featherbedded labour arrangements, but even if there had been featherbedding in the state-owned utilities it wouldn’t have been a big component of costs.

But privatisation went ahead regardless, and those companies that successfully bid for the network assets were initially rewarded with lavish returns guaranteed by a generous regulatory regime, at first operated by states, and more recently operated by the Commonwealth. They were allowed a high return on capital, and initially at least were allowed to build almost as much by way of transmission and distribution assets as they wanted, leading to so-called “gold plating” of network assets.

Even though regulation is now less generous than it was initially, the network companies are still doing very well out of owning assets with essentially no risk and a guaranteed return on capital. The Australian Energy Regulator allows the firms a nominal return on capital of around 7.0 per cent, which translates to a real (after-inflation) return of about 4.5 per cent. That may not look like a king’s ransom, but by any measure it is generous for a risk-free asset. For comparison, long-term Commonwealth bonds are currently providing a nominal return of just under 3.0 per cent, or close to nothing in real terms.

This is not some startling revelation: it’s simply the application of standard economic analysis to a monopoly situation.

But why did governments go ahead with privatisation? And why were the terms so generous? Some may believe that it was a conspiracy of crony capitalism to give away public assets to well-connected mates. Some others may believe that it was the lure of a big cash injection without consideration of the loss of a public asset. After all, that has been the general story of privatisation, and the promise of a permissive regulatory system would have boosted that cash price. And it is consistent with established Australian economic policy – selling mineral resources, selling land, financing investment by providing foreigners the right to manufacture behind tariff barriers – to support current consumption. Our high standards of material comfort are financed largely by selling assets to foreigners, and so long as Coalition governments are pursuing such policies it must be OK, because everyone knows that the Coalition is blessed with economic wisdom.

That leaves the “retail” function. Retailing electricity is not a natural monopoly. Virtually anyone can set up as an electricity retailer, and even though three big firms dominate the market, there has been a proliferation of small retailers. Governments can genuinely say that competition has been achieved. But at what cost and with what benefits?

In most markets competition brings benefits of innovation and choice. But I want my electricity at a vanilla 50 cycles, 230 volts, just like my grandmother wanted it. And in any event, whatever “retailer” I choose, it’s the same electricity. The “retailers” are simply coupon clippers, delivering me nothing that the state-owned utilities didn’t, but at a higher price. They take a huge margin for the tasks of smoothing out the daily spot prices and reading my meter. And they have to pass on to consumers all the costs of competition and of dealing with the generators and networks.

Rather than re-nationalising the “retail” function, and saving all those marketing and transaction costs (including the costs to consumers of shopping around for the best deals), Morrison is proposing to impose price controls on retailers – ceiling prices applying to all retailers in a particular region. With a combination of price control and a lack of product differentiation all that’s left for the consumer are the costs of competition.

In fact, far from achieving the textbook model of competition, the NEM has allowed the development of a new entity known as the “gentailer” – the big power company that has a presence at both the generating end and the retailing end, behaving as a firm holding a strong market position through domination in production and retailing, while contracting out the transport function.

The case for re-nationalisation

The clearest and most economically responsible policy path would be to re-nationalise and re-integrate the networks and retailers. Not as government-business-enterprises acting just like profit-making corporations, not as cash cows to boost public revenues, and not as union featherbeds, but as public utilities. Such utilities should have the corporate objectives of paying social dividends in terms of cleaner electricity, affordable supply to all, and improved energy efficiency. Such objectives cannot be pursued by for-profit entities, unless they are so heavily regulated that the costs of regulation outweigh whatever supposed inefficiencies are associated with nationalisation. (The inefficiency of government entities is an article of neoliberal faith rather than of empirical observation.)

The generation function can ideally be left largely to the market, with normal competition policy measures to prevent gaming and strategic behaviour. Also, in order to achieve competitive neutrality, there should be a carbon price to ensure that fossil fuel generators pay the full cost of the resources they use, including their contribution to destructive climate change. (The present system, which sees renewables, de-facto, subsidising coal, is economically absurd.)

With the retail function put back in public hands, market manipulation by “gentailers” would be a thing of the past. They would have to compete in a wholesale market.

It’s almost impossible to understand the economic theory leading the Morrison Government to propose breaking up the generators. But perhaps it has nothing to do with markets. Rather, if the assets of AGL, Origin and others can be broken into bite-sized pieces, there would be assets for the Commonwealth to take over. They could keep old coal-fired stations on life support, and perhaps even build new ones.

Ian McAuley is a retired lecturer in public sector finance at the University of Canberra. He holds shares in AGL and strongly believes that they should hand back their “retail” functions to the public sector.