IAN McAULEY. The National Electricity Market: What happens when economists get involved with electricity

John Menadue has asked me to write about the National Electricity Market – the NEM.  I should be qualified to do that: my first degree and my first years of professional work were in electrical engineering and in my later professional work I taught public economics. Who could be better qualified? But let me apologise to the readers of John’s blog: I’m not up to the task because I cannot make sense of the NEM.

I can write a little about its design however, which is wonderfully congruent with the models in economics textbooks.

Privatisation of the old vertically-integrated state electricity utilities was accompanied by a process known as “structural separation”, in which the utilities were divided into four business entities. These are generators (power stations in everyday language), transmitters (the big high-voltage lines that interfere with the AM radio in your car), distributors (the electricity wires you see around our cities), and retailers (the people who send you the bill).

As in many supply chains it’s separated into businesses that make the stuff, the businesses that transport it (think of trucks on interstate freeways and delivery vans on local roads), and shops that sell it. In economic terms it’s all so orderly.

Generators operate in what is known as a “contestable” market – a contestable market being one where there are no practical barriers to new entrants, and, as such, can be left to Adam Smith’s invisible hand of the discipline of competition. With the eastern states (including South Australia) all interconnected in a grid, anyone can bid to supply electricity – from the huge 3000 MW Eraring station near Newcastle through to small wind farms of 20 MW or so. Even the solar panels on people’s rooftops, typically 2 to 5 kW , are part of the NEM . (A megawatt is 1000 kilowatts; a kilowatt is enough to operate a stove, a small heater or 100 LED ceiling lights.)

In the NEM generator companies make their price offerings to the market, through the Australian Electricity Market Operator, every five minutes. (The way these bids are handled discriminates in favour of existing fossil fuel suppliers, but that’s another story.)

The transmitters and distributors are what are known as “natural monopolies”.  That is, there is room in the market for only one entity owning a high voltage line or urban distribution system. If the private owners were left to their own devices they would maximise their profits by keeping the market undersupplied with transmission and distribution capacity (losing a bit of revenue during blackouts is better than investing in all those extra wires and transformers to keep the system going 24/7). So the transmitters and distributors are regulated to make sure that they invest in adequate capacity and do not gouge high prices out of customers. Again, it’s all in line with the economics text books.

Then there are the retailers. Their task is to hedge between the prices passed through by generators and the prices paid by consumers. Spot prices can be very high – particularly at coming-home time on a hot summer day when air conditioners are operating at full blast, and the system is struggling to supply. In the NEM spot prices charged by generators, can rise to as high as $12.50 per kWh, while retail prices tend to be in the order of $0.15 to $0.25 per kWh.

Although “retailers” compete with one another, they are all selling you exactly the same product (that is “the same”, not “the identical” product). They are financial intermediaries, and their service is essentially to even out those price fluctuations, while taking a profit along the way. As with the generators, they are subject to light regulation because the market is contestable.

It’s a beautiful set of arrangements, a masterpiece of economic design.

But it doesn’t make sense to me, because even though it’s many years time since I’ve been on the payroll of an engineering company, once an engineer always an engineer, and as an engineer I like to check it out with practical experience.

For about 30 years until 2011 I was half-owner of a small cattle station on the edge of the arid zone in South Australia. When I first became involved the station was operating on a 32 volt “lighting plant” – one of those systems that allows you to use an iron or a toaster, but not both at the same time, particularly if you want to have the lights on, and 32 volt appliances were getting as hard to buy as buggy wheels.

It was 30 km from the nearest electricity supply, an unreliable SWER line (“single wire earth return”) which the utility would have extended had we forked out something approaching the market value of the whole station. So as with so many outback enterprises the only option was to roll our own.

The bits came together. Some photovoltaic solar panels (back when panels were expensive and only about 10 percent efficient – panels are now at least 20 percent efficient). A bank of batteries – huge lead-acid affairs, when lithium ion batteries were nowhere near the market, an inverter, 2000 meters of cable to supply the homestead, workshop and pump, and a 7.5 kVA (roughly 7 kW) diesel generator. 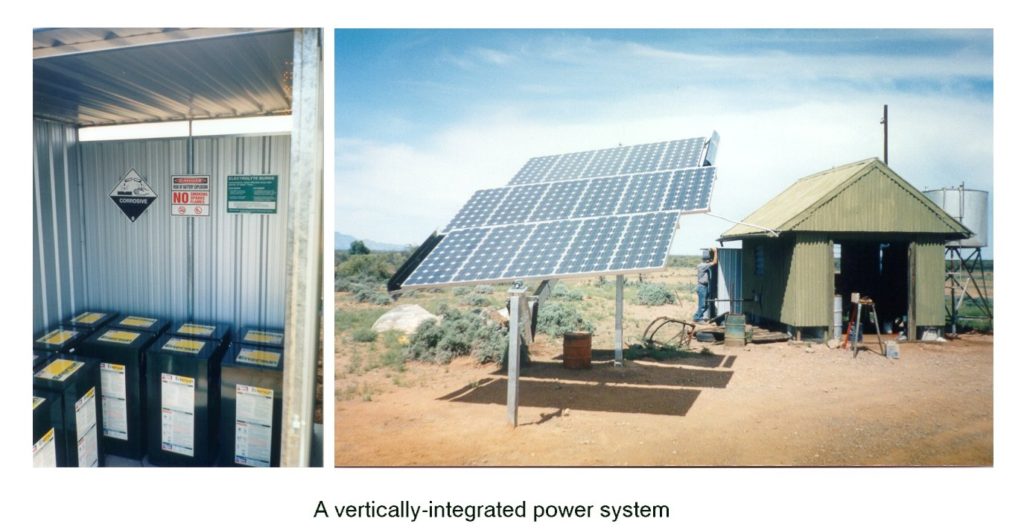 Being finicky (one has to be in a low-margin business) I carefully costed it all, using orthodox life-cycle costing, and found it was delivering electricity at about 60 percent of what the electricity supplier would have charged had the station been connected to the grid.

Now a small 7 kW system, part fuelled by diesel, is about as technically inefficient as you can get, but per kWh it was still cheaper than electricity was being sold by the privatised electricity company to those who were on the grid.

So that led me to question the reasons for the price/cost difference.

One is that there was no “retailer” in our system. We didn’t need one, but the NEM needs retailers to even out the volatile prices thrown up by the market, and retailers account for a quarter of the price of electricity delivered to the home – roughly the same as is accounted for by the cost of generating electricity.

Another was that we had only the distribution network we needed – about 2 km of conductor. Yet another was that I wasn’t paying myself a seven digit salary for my managerial expertise. And those life-cycle costings were based on low but realistic discount rates: unlike the electricity companies I wasn’t expecting an astronomical 12 to 18 percent real return on capital.

What we had was a microcosm of the old vertically-integrated state utilities.

How did the economists who crafted the NEM get it so wrong? After all economists, like engineers, supposedly take a professional approach to design, be that of an electricity market or an electricity turbine.

Some explanation is provided by Yale University’s political scientist James Scott in his book Seeing like a state: how certain schemes to improve the human condition have failed. Scott points out that far too often policy advisers craft their advice around an over-simplified model of the system with which they are dealing, and in ignoring the complexity they get it wrong.

In my view the economic theory that has delivered us privatisation of electricity (and other assets) is too purified, too abstract. In engineering terms it’s as if clever people have been designing machinery using only Newton’s equations of mechanics and ignoring the reality of friction.

The NEM, however, has heaps of “friction” – “transaction costs” in economic terms. All the bargaining costs between various entities. Legal costs. Retailers’ marketing and advertising costs. The costs of regulators. High executive salaries – much higher than were ever paid in the old government utilities. High profits – much higher than government bond rates. And it has the normal market mechanisms for prices to be set by the last supplier to come on line and incentives for firms to withhold supply to maximise prices.

I am not suggesting that economists should abandon their theoretical models any more than engineers should abandon the laws of physics. Rather, as a matter of sound professional practice, they should improve their models to make sure they have more robust predictive power and that the criteria for system performance is in terms of consumer benefits rather than adherence to the idealised models in Economics 1 textbooks. Bad economics leads to bad public policy.