There is nothing novel about Treasurer Morrison’s discovery that government debt is all OK provided it’s applied to funding useful assets. But it may be an indication that the government is disillusioned with monetary policy as a means of stabilising the economy, and is moving back to fiscal policy.

A balance sheet listing liabilities and assets has always been a basic corporate accounting report. Shareholders are not necessarily concerned about a company’s level of debt, but they are concerned about a company’s net asset position – assets minus liabilities. In fact financial markets would judge harshly an established company that had no debt, because it would be paying too much for its capital and would be forgoing investment opportunities.

Although some Coalition politicians are slow learners it’s hard to believe that it took Morrison until this year, when he turns 49, to learn basic accounting.

Rather, the explanation for his late acknowledgement of the role of debt lies partly in government accounting conventions, partly in political opportunism, and partly in ideology.

The Commonwealth does produce a balance sheet, buried deep in budget documents, but to read it one would believe our stock of public assets is almost worthless. That’s because most significant Commonwealth-funded capital works, such as roads and railroads, are funded as payments to the states: they appear on the states’ balance sheets, not the Commonwealth’s.  Also, many long-lived public assets have very low book values based on acquisition costs many decades ago, and some have no book value although they have high community value. Consequently the Commonwealth’s balance sheet attracts little interest, apart from a figure known as “net debt”, being gross financial liabilities minus financial assets.

The opportunistic explanation lies in the accumulation of debt during the six years of the Rudd-Gillard Government. When Labor came to office in 2007, just before the global financial crisis, the Commonwealth had no net debt: by 2013 when it left office net debt stood at 13 per cent of GDP.

It was a low figure by international standards, and most independent economists saw Labor’s stimulus spending as a responsible defence against a looming recession. But the temptation for the Coalition in opposition and then in government to depict that accumulation of debt as something profligate and irresponsible was too much to resist. Finance Minister Mathias Cormann has used every opportunity to talk about the government’s “commitment to repair the budget mess that we’ve inherited from Labor”. Supposedly independent ABC journalists effortlessly slip into talk about “budget repair”, as if some careless infant has broken it.

That line has become embarrassing for the Coalition, however, because over the three years of its watch net debt has risen to 19 per cent of GDP.

In reality in Australia, as in most similar countries, governments of the “left” and “right” practice Keynesian counter-cyclical management, although those on the “right” pretend that they regard Keynes with disdain. Had the Coalition been in office in 2008 it would have had a stimulatory response. Its specific measures  may have differed from Labor’s – perhaps fewer school buildings and urban infrastructure projects, and a few more handouts to favoured businesses and rural boondoggles – but the fiscal effect would have been the same.

Morrison’s conversion is about more than the closing of a window of political opportunism. It’s a tacit acknowledgement that monetary policy, the preferred “hands off” measure to stabilise the economy, has failed. Economists from the IMF, and more recently from our own Reserve Bank, have been warning that monetary responses to sluggish economic growth – that is the use of interest rate reductions to stimulate growth – hasn’t been working.

One of the few ideological clashes of late last century was between those who believed in fiscal policy and those who believed in monetary policy. As a broad generalisation, those on the “left” favoured fiscal measures – direct government expenditure measures – to stabilise the economy. The standout historical example was Roosevelt’s “New Deal”, with a huge outlay on federally-funded infrastructure and other programs, and then came the war, which for the economies of allied countries was the mother of all fiscal stimuli. (Fiscal policy, of course, is not just about stimulation: it’s also about withdrawing the government’s call on resources when the private sector picks up.)

But by the end of the century monetary policy was winning the ideological battle. If a central bank can use its reserve banking power to set the interest rate (in Australia’s case the short-term money market rate, which influences other interest rates), then it’s up to investors in the private sector to decide how to respond. If money is cheap enough, businesspeople will go out and borrow, and, according to the ideological slant of monetarists, private investors will make wiser investment decisions than politicians.

Our Reserve Bank’s handling of interest rates has been textbook perfect. It responded quickly to the GFC, lifted rates again as the government’s fiscal stimulus kicked in, and since then has been bringing interest rates down. 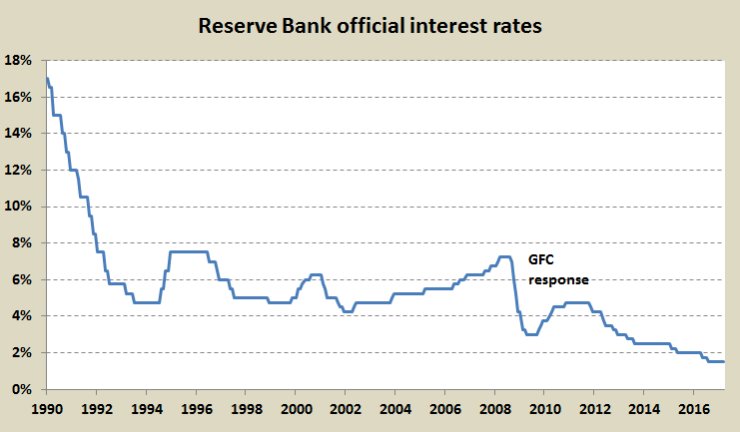 The trouble is that this response hasn’t worked. Corporations aren’t investing: even though the last couple of years have seen good corporate profits, companies have been handing most of their profits back to shareholders as high dividends and capital buybacks. That’s because they don’t see the opportunities that would encourage them to invest in new ventures. Even though there’s plenty of money to be borrowed, they just don’t see good market opportunities.  (That’s one reason why corporate tax cuts would be useless.)

If, for example, a business borrows money at an 8 per cent nominal rate and inflation is 3 per cent, then every year the real burden of repayment falls by 3 per cent, which means the real interest rate is only 5 per cent.

But for many unspohisticated investors it’s the nominal rate that counts, because such investors and the lending institutions with which they deal base the amount they can borrow – for a house or a piece of equipment for a small business – on borrowers’ capacity to meet the immediate repayments.

For housing, over the last few years while nominal housing rates for owner-occupiers have fallen, the real rate has remained fairly steady at around 4 to 5 per cent. The wise investor takes the fall in inflation into account, realising that in a period of low inflation the repayment burden will not fall away, and is more guided by the real rate, but the naive investor, egged on by the idea of the reliability of “bricks and mortar” and ever-rising real estate prices, falls for the trap.  (Older readers who had mortgages when inflation was high will remember that while early repayments were tough, the burden soon fell away as their nominal incomes rose. That is no longer the case now that inflation is low.)

In short, monetary policy has failed. It’s been worse than useless, because not only has it not stimulated productive investment but also it has contributed to an unsustainable real-estate boom – a point Saul Eslake mentions in his contribution on housing policy. Perhaps if inflation becomes established once again, monetary policy will be effective, but it needs to be put aside for now.