The conventional wisdom is that Morrison’s intransigence on climate change, which has badly damaged our relations in the Pacific, is due to the arithmetic of his slim parliamentary majority. But why do we have to assume that our two-party “Westminster” system with its rigid party loyalties is immutable?

When Pacific leaders took a strong stance on climate change, they provided the Morrison Government with an opportunity to adopt a more responsible and economically sustainable climate change policy. Governments of all persuasions use pressure from international relations to break difficult logjams in domestic policy.

Instead of taking this opportunity, however, Morrison hardened his stance, confirming Australia’s role as a bully towards smaller and poorer neighbours – well established in the case of Timor Leste. To reinforce that confirmation his deputy prime minister, true to National party tradition, made his patronising and offensive statement about fruit picking.

The strangest domestic reaction has come from Malcolm Turnbull, who, on ABC radio on Friday, suggested that we should cut Morrison some slack, because, whatever his own views, he is constrained politically. Turnbull pointed out that “there is a very strong minority within the Coalition and the media and community that is ferociously opposed to taking action to reducing greenhouse emissions”.

He is painfully aware of this fact, but why should that minority be able to dictate government policy, when scientists and independent economists are warning about the dire threat of climate change, when a clear majority of the population support strong action, and when a majority of the representatives elected to parliament would like Australia to do more to meet our obligations? The minority in question is not defined, but even if all National Party and Queensland LNP members are included, those parties commanded only 13 per cent of the vote in May. Even adding other far-right parties (Uniter Australia and One Nation), the far-right total vote is under 20 percent. Yet Turnbull is essentially saying we have no alternative than to let them set the nation’s policy on climate change.

If he’s right, something is seriously wrong with our democracy.

It’s an interesting counterfactual to consider the reaction of the political commentariat if Labor had won the election by a slim majority, and instead of being supported by a disciplined and united team (as Shorten had around him), he had to shape Labor’s polices to satisfy a small group of far-left hotheads.

The conventional political wisdom, which guided Turnbull when in office and when he made his statement on Friday, is that a governing party with a small parliamentary majority, unless it is strongly united in policy, cannot pursue difficult reform. That’s because dissidents may break ranks and “cross the floor”, possibly precipitating an internal leadership challenge or a parliamentary vote of no-confidence. That fear was in full display just before the election when Morrison tried every stratagem available to stop a vote on medical evacuation of asylum-seekers.

If this means we have to wait for a party to win an election with a large majority, then important structural reform – dealing with climate change, reforming taxes – may be off the agenda for a long time. Landslides are out of fashion for now.

The graph below shows lower house majorities in the last twenty elections: big majorities are rare. There has been nothing to compare with Fraser’s 55 seat majority in 1975 (equivalent to a 63 seat majority now because the chamber was smaller). On the back of Labor Party conflicts Abbott won a large majority on 2013, but it can hardly be seen as endorsement of his policies, because as soon as the electorate realised that his election promises (Gonski especially) were lies, he rapidly lost his political capital and any claim to a mandate. 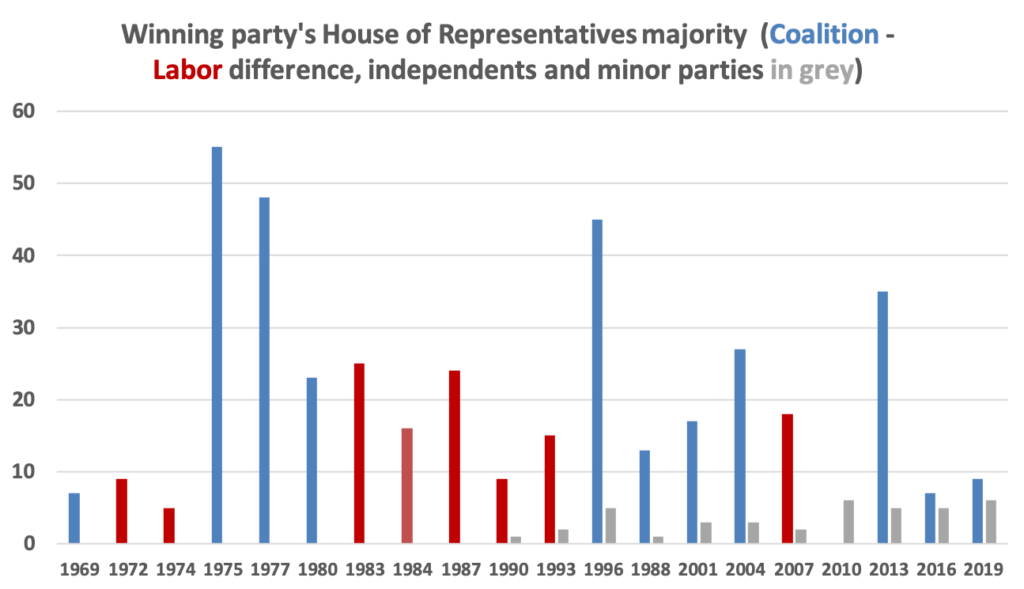 Looking to the future – the “Westminster” system is dying

It’s hard to see either the Coalition or Labor gaining a commanding majority in the next election (2022 or probably sooner). As the mendacity of the Morrison Government becomes more evident, and as worsening economic conditions reveal the deception in the Coalition’s claim to have superior economic skills, it’s hard to see the Coalition improving its position. And it’s similarly hard to see Labor winning a landslide: its performance in this term so far is lacklustre, and in any event, Labor rarely wins large majorities. (Look at the comparative size of the red and blue bars in the years when governments changed.)

The long-term decline in the primary vote for the two main parties (both parties lost primary support this year) confirms that the two-party “Westminster” system is slowly unravelling, but the conventions and assumptions within which it operates are holding on against the long-term trends. Morrison and his backers in the Murdoch media talk about a “mandate”, even though this is based not only on the “winner-take-all” model of a fifty per cent plus one margin, but even more undemocratically it is based on the presence of an ideological minority within the Coalition. (Even the fifty per cent plus one rule is violated in our elections, for five times in the last seventy years governments have enjoyed parliamentary majorities without winning the popular vote – four times to the Coalition’s advantage, once to Labor’s.)

In spite of the undemocratic nature of Morrison’s so-called mandate to stonewall on climate change, few commentators question it, as if such an outcome is an immutable result of our constitutional rules. But fortunately, there is nothing in our Constitution about a two-party “Westminster” system. Our Constitution is written for a representative parliament, without too much prescription of the form of that parliament. Yet journalists talk about “crossing the floor”, as if it is something akin to treachery. When there are votes on issues involving religious beliefs, such as same-sex marriage, politicians are allowed “conscience votes”, implying that for all other legislation they are unencumbered by any moral considerations, tribal loyalty to their parties outweighing considerations such as morality or the national interest.

Further and more basic evidence of the erosion if the Westminster system is the rise of independent and minor party members in the House of Representatives, starting from a zero base just 30 years ago. (See the bars in grey.)

In the 2010 election the two main parties were tied. By the conventional political wisdom Gillard’s government should have been paralysed, but as it turned out, through its deals with independents and Greens, it became something of a reforming administration. In fact it was because of its weak parliamentary position that it had to implement a carbon tax, something that would not have happened in a majority government.

Most media used the disparaging term “hung parliament” to refer to this era, but it was probably the strongest example, at a federal level, of representative parliamentary democracy at work in our country. Since then we have gone back to a model whereby the executive considers Parliament as a hindrance rather than as the prime arm of government.

Breaking the impasse – parliament to take back control

This all comes back to the assumptions guiding the conventional wisdom. There is no reason a gathering of members of Parliament, across different parties and independents, cannot put forward legislation proposing strong action on climate change – or for that matter reforms such as a federal ICAC. They would have to navigate the complexities of parliamentary procedures, but on matters not involving fundamental Labor-Coalition differences (such as income redistribution) they should be able to muster the numbers.

It would take strong nerves on all sides. Journalists, conditioned by “Westminster” assumptions, would write tales of treachery and disloyalty, about a government falling apart and about imagined “left-right” conflicts. Michelle Grattan would find it hard to fit it into her “on-the-one-hand-on-the-other-hand” framework, and the ABC would have to convene a high level committee to go through the contorted exercise of re-defining “balance”. Such is the legacy of political assumptions that are well past their use-by date. And Labor would need to have the discipline not to call a no confidence motion: that’s one reason why parliamentarians should move soon, before the polls turn against Morrison.

The two-party winner-take-all “Westminster” model, based on nineteenth century class divisions, did a tolerable job in its time, but as shown in the trends in election results, both in terms of seats won and primary vote, Australia is on the path to a different form of democracy. That will almost certainly be one where power shifts towards parliament and away from the executive. It may take the form of expanding numbers of independents (which will probably be the case in the next election), or, as in Europe, the creation of new parties, some of which may be hived off from existing parties. There may or may not be formal agreements between parties (but probably nothing as binding and undemocratic as the secret Liberal-National agreement). Political scientists will point to democracies such as Italy to illustrate the disadvantages of these governance forms, while others will point to democracies such as Denmark to illustrate their advantages.

Whichever way, what emerges can hardly be any worse than our present situation, so well summarised by Turnbull, in which public policy is held hostage by a small minority of political extremists. Our elected representatives have an opportunity to break away from limiting assumptions and to assert the power of parliament to solve our pressing problems.

Ian McAuley is a retired lecturer in public sector finance at the University of Canberra.